How do Treasure Parcels work?

I'm quite new to Dungeons and Dragons 4e, and am currently DMing a game with some friends of mine using the Dungeon Master's Guide. I'm a little stuck however with the treasure parcel system. There are four of us at level one, and we've just gone up a level.

I am now trying to work out what gold and items the party should be on. I have found a few things online which say the gold per level per character is 720, but does this include magic items?

I understand that we should have a magic item level 2, 4 and 5. But then I get stuck on the gold count, should the party as a whole have 720 gold, should each character have 720 gold in the group and with the parcels consisting of gold, is that per character or per party?

Long story short, with a party that's just reached level 2, should the party as a whole have a level 2, 4 and 5 magic weapon, 5 potions, and around 720 gold per character or player?

Treasure parcels are shared among the whole group, not one per character.

This is the Treasure Parcel for Party Level 1, found on DMG page 126: 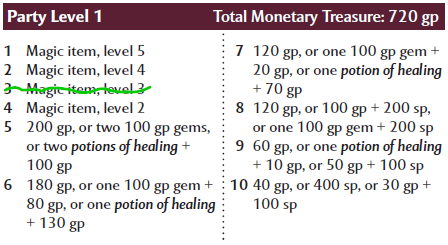 This has ten treasure parcels, and with a four-person party, you ignore parcel #3 (as you've discovered). Over the course of level 1, you should drop each of these once (except parcel #3).

Parcels 1 to 4 are magic items. Parcels 5 to 10 cover currency, potions and valuables. Each of those lists options of what to drop, and you only drop one of those options for each parcel. The first option is the pure gold option, whilst the other options involve substituting a portion of that gold for potions and/or valuables worth the same amount as that portion of gold.

So for parcel 5, your party would receive either 200gp, or two 100gp gems, or two potions of healing (worth 50gp each) + 100gp. They would not receive all of that. No matter what they get, though, parcel 5 gives them 200gp worth of stuff.

No matter what option you pick for each parcel, since they work on an equivalent-exchange basis, your party will end up with 720gp worth of stuff by the end of level 1 (on top of their magic items). This is the "Total Monetary Treasure" value referred to in the top right.

So at the end of the level, your party might have:

Not the answer you're looking for? Browse other questions tagged dnd-4e treasure .

8
What's a good way to use treasure XP in 4th edition?
5
How should treasure parcels be adjusted to account for permanent character death in Dungeons and Dragons 4e?
12
How many magic items or magic item equivalents should I give out alongside inherent bonuses in D&D 4e?
3
How should I give out treasure in Dungeons and Dragons 4e Essentials
6
When giving out magic item treasure, do I replace or supplement what characters have?
10
Handling a dragon lair's treasure consistently with treasure parcels
6
Is there an official treasure generation method to limit magic item rolls based on dungeon level or some other factor?
21
How do I make treasure stashes rewarding in a very small party?
4
Should I give my larger-than-expected party more total gold/treasure to compensate?
7
How to handle friendly NPC treasure