What updates should be done to older monsters to bring them in line with MM3 era monsters?

I know that to better balance paragon and epic level players against similar level monsters, WotC changed the math used for monsters for MM3, and I believe that they changed some of the types of powers they gave monsters.

If I want to update monsters from MM1 or MM2 to be in line with MM3 era monsters, what changes should I make?

I think the best way to do it is to benchmark an MM3 monster of the same level and role and do some comparisons. Simply updating damage on the basic attack is a quick solution, but consider other effects. I really do think there's more than adjusting some numbers here.

It's from an early period of D&D4 and has those same standards. Presumably, it needs to be updated. 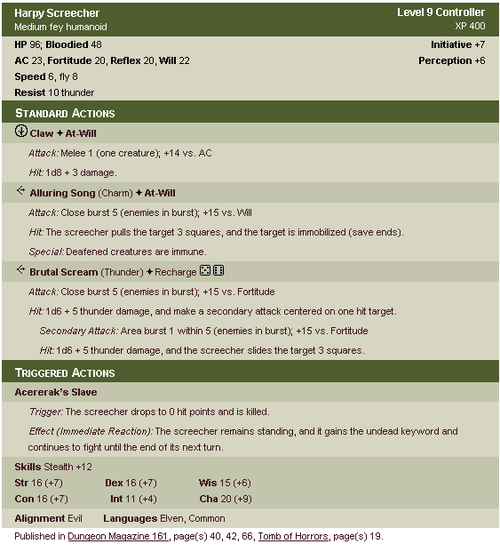 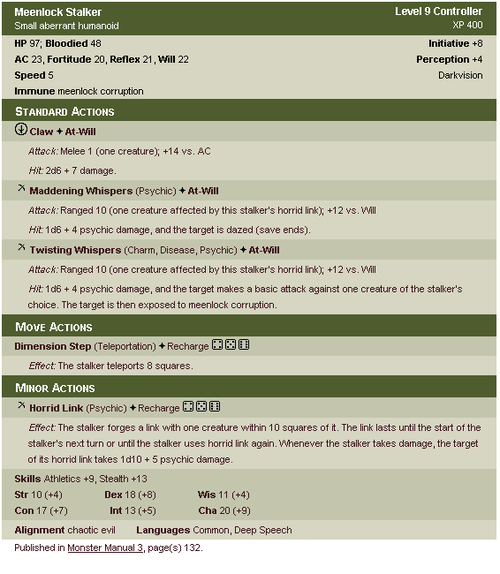 From what you can see, the stats (hp, defenses, to-hit..) are mostly comparable, except for the damage from that basic attack- which is about 8 (average) from the Harpy and 15 (average) from the Meenlock Stalker. I think the Stalker has a more powerful encounter power (the Horrid Link ability, vice Acerak's Slave), but otherwise the Harpy's screechy pull and slide powers and the Meenlocks dazing and quasi-dominating powers are comparable.

If you really wanted to beef up the Screecher I might add some damage to her basic attack, but it might be even better to give her something like a minor action rechargeable encounter power- perhaps something that chains off of slide or daze, minor action, rechargeable on a 4-6. It doesn't even have to do damage. A fortitude attack that gives a character Vulnerability to Thunder damage or reduced defense against charm attacks.. would also be great.

Causing a vulnerability does the increased damage you want, and creates a more interesting status effect. Another alternate solution- instead of doubling creature damage, consider giving the creature an attack that allows for two basic attacks.

The simple way: leave heroic tier monsters alone, double the static damage modifier for paragon and epic tier monsters, and triple it for brutes. I.e., a level 12 monster doing 2d6+5 damage would do 2d6+10 damage. Give soldiers a -2 penalty to attack, and give brutes a +2 bonus to their attacks. See here and here -- those modifications are as per Greg Bilsland.

Monster Manual 1 elites should have fewer hit points; take their Constitution score times two away from the total. Monster Manual 2 elites are fine.

The more complex way: grab the rules update here (PDF) and look for the Setting Damage section. Revamp all the monster damage numbers as per those guidelines. This is more accurate, but also more work.

While Bryants answer is awesome (and a lot of work), I think most of the changes can be summed up like so.

Solo's need a big damage boost and need to drop hp's by about 25%. This is to make them less grindy. The Details of the damage boost you can see above, the most serious bit of it, is making sure they have multiattack options and some conditional (reactions) attacks to help out if the party attempts a stun lock or other condition spam.

As for peter's break down, its pretty good, but monsters vary even at the same level and roll. You really need a kind of systematic break down to learn from that method and a willingness to let exceptions lie.

12
How do you calculate damage for MM1 and MM2 monsters?
13
How can I decrease the difficulty of a scene on the fly?
9
How to update a monster using the D&D4 Monster Builder?
14
Are there guidelines for creating & customising MM3-style monsters?
4
What are the correct stats for Ice Archon Hailscourge?

3
I'm looking for advice on Wizard status effect powers. Anyone have good advice?
3
Does a dominated monster deal sneak attack (or other bonus) damage to itself?
1
How to balance a custom Shadow Skip power?
14
How to deal with a DM that doesn't listen to or cooperate with his co-DMs?
1
What are the limitations on powers usable with Unleash Spell Power?
16
How can I make the final boss of the LMOP a memorable and exciting fight for my group?
5
How can I help my PCs fight against a Mind Flayer's psionic blast?
4
How to convert armour class from Pathfinder 1 to D&D 5?
22
What magic items would best make a (corrupt) city guard competitive with Paragon tier heroes?
8
How could you balance a Druid transforming into an owlbear and other monstrosities?