How can you use isometric maps (or other tricks for addressing 3 dimensions) for miniatures?

I remember in the 90s isometric projection, 3/4-view 3D-on-2D maps became briefly popular in published game books, then all but disappeared.

Watching "The Desolation of Smaug" I became aware that I would never be able to represent many of the settings in the film usably on a flat 2D "straight down" map. The elven palace and the interior of Erebor were just too complex in 3 dimensions to flatten appropriately.

Has anyone ever attempted miniatures battles on orthographic maps (I haven't, yet)? Is the distance distortion more trouble than its worth? Any tips on creating battle maps that can both address complex 3D spaces and function appropriately for miniatures, or for converting relatively easily between the two modes?

EDIT: Here is a sample (scroll down the web page for the Castle Ravenloft map) of a traditional orthographic map that I was referring to, but if anyone has suggestions on viable alternatives I would be interested in those too.

If you have the option to go with some kind of model, toys, etc. that allow you to see it, that's best.

If you don't, here's some options:

On your map, use two colors of markers - one is the upper level, one is the lower level. For your mini's, you'll want something like colored rubber bands, flags or to stack them on top of a base/token indicating which ones are up top/lower down.

This only works if you don't have too much overlapping area - you can put the upper areas parallel and further out on the same grid map to the lower areas. I've used this for a fight on a series of platforms/construction scaffolding, and it worked well enough.

Get several separate map grids, each one representing a different level.

This works best if there's a lot of overlapping areas, where people might run/climb up and down, but not where they'll be fighting, shooting arrows, etc. between floors very often. You want to keep the action on a single map and not have a mini on one map shooting ranged attacks at someone down stairs, which means running over to the other map and seeing how they line up.

All of these require you, and your group have good spacial visualization and communications skills, otherwise you just end up with people MORE confused. Usually terrain made even of cardboard or legos, works best for visualization and for more people keeping track of their positioning.

I don't see it working. A 2d map is still only going to ever give you the upper most surface. Consider a troll under a bridge. How do you know what's on top of the bridge vs what's below it? IMO this is no better than a flat map.

What has worked for me for minimal effort is Construx. They were a competitor to Lego during my childhood and can be purchased by the pound on eBay. I dug some out of my parents' basement for my last game and applied a grid to all the panel objects. It'll make more sense with a picture. 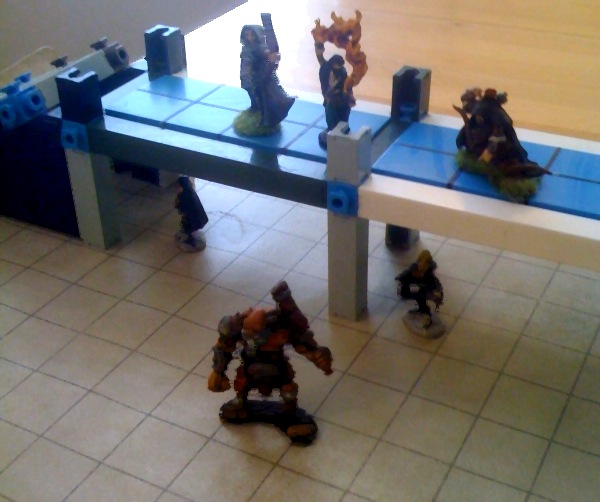 I went with Construx because they seemed more conducive to a battlemat than lego. For those who aren't familiar you get vertex pieces that can connect an edge piece in the X, Y, and Z planes. Panels can be placed on those edges to create a surface to play on.

The usual way of addressing this is to use 3D terrain. There are innumerable cardstock and papercraft products available for creating your own 3D terrain that works great for this, cheaply. This stuff is more commonly used by tabletop wargamers who want something cheaper (and easier to replace) than resin or plastic building and terrain pieces, but skirmish scale matches RPG miniature scale (which is no coincidence), so they do get used by RPGers often enough. Think of it like the next step up from printable dungeon tiles.

I like the modular papercraft systems a lot, since they give you a lot of flexibility to print and fold the pieces you use most, and they interlock on the table for stability. Fat Dragon's PDFs are aimed at RPGs specifically and are a particularly good/popular example of a modular papercraft system. Scroll down on this PDF's page for a nice 3D cavern example, and here's lots of pictures of a "cliffs and dwarf mountain" set that looks like it was inspired by The Hobbit's Lonely Mountain.

There are a lot of vendors of papercraft PDFs – those links are just an illustrative example of what you can accomplish with typical commercial papercraft models. If you're creative, you can design your own too.

Another example of 3D Terrain is the company called World Works Games.

They have several product lines, specially their TerraClips (pre-printed cardstock terrain, very easy to assemble) and their TerrainLinX (PDF terrain you have to print yourself, but it's very modular).

Both lines are awesome, choosing one or another depends more on $$$, craft skills, access to printers, and time to cut and prepare everything. They are also "easy" to store in general.

All the answers here cover some map solutions nicely, the only thing I'll add to that is that 3d architectural puzzles can be loads of fun. I had a castle one made out of foam from my childhood and it worked perfectly with my miniatures. Most of them won't be to the proper scale though.

How to calculate Range/Distance on a 3d map
Just use a piece of string or twine and mark 1" intervals on it. You can use a tape measure, but I find it tends to knock over the miniatures.

EDIT
I found a link a puzzle similar to what I used, very close the correct scale!

Not the answer you're looking for? Browse other questions tagged miniatures map-making maps or ask your own question.

9
Pre-painted Miniatures for D&D other than from Wizards
12
How to Use Module Maps
3
Where can I find pre-painted plastic miniatures for Sci-Fi games?
6
How can I make a working torch to use with miniatures?
13
How can Forgotten Realms maps be used in DMsGuild adventures?