Is there any information on cities where most of the citizens are undead?

In Open Grave it says:

Other places, such as the city of Eredu, take a more proactive approach. In Eredu, undead that want to be citizens must submit to a process of authorization to gain unrestricted access to the metropolis.

However, I can't find any more information about this place. I want to create a city that is mostly civil and populated by undead. My PC's hate undead and I think it would be a fun twist to have them negotiate a place like this.

I'm looking for resources and suggestions.

Particularly the nation of Karrnath, where mindless undead are accepted implements of war, smarter undead have been created for yet-better warmaking, truly intelligent undead can be accepted members of society, and the Blood of Vol cult to undeath-as-immortality is a majority religion.

3.5’s Libris Mortis has a little detail on undead societies

Unfortunately, not much, but on pages 14 and 15, there are descriptions of societies where undead are “Open Members” and also of purely or dominantly “Undead Societies.” Sigil is listed as one tolerant place where undead may be open members, while a city named Nocturnus is referenced as having a Pale Ward where undead are the only legal residents. Nocturnus is mentioned a few more times in Libris Mortis, but unfortunately never in any great detail that I can find.

It’s a city of “ghouls” (but Fallout ghouls are actually alive, just made to look hideous by radiation); might be relevant to use as an idea of what it’s like, though I don’t recall the game really going into too much detail other than “oooh, we’re spooky and different, but peaceful; how do you feel about that?” Which might work for you, but you might want a bit more. 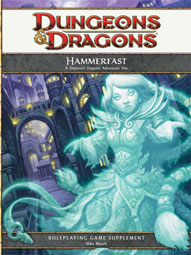 From the first paragraph of the supplement:

History walks the streets of Hammerfast in the form of the dead, the dwarves and orcs who died in this place more than a century ago. They are now ghosts consigned to wander Hammerfast's streets until the end of days. Hammerfast was once a necropolis, a collection of tombs where the dwarflords interred their people. As the dwarves' wealth grew, their burial chambers changed from simple stone sepulchers to lavish treasure vaults filled with the material wealth garnered over a lifetime.

There are three points that make Hammerfast unique.

• Hammerfast is a town where the living dwell among the dead. The buildings are tombs and sepulchers, cleared of rubble and refurbished to serve as homes and businesses.

• Some of the tombs remain sealed. Their treasures are a powerful lure for adventurers, but raiding such a tomb is punishable by death. In some of the inhabited tombs, secret doors to forgotten passages and chambers await discovery.

• The dwarves must endure the presence of orcs. As part of the divine compact that created the town, Gruumsh demanded that his dead be honored, too, by a temple devoted to his power.

Not the answer you're looking for? Browse other questions tagged dnd-4e undead .

15
What other undead paths are there for immortality?
7
Where is the information for Vampire hybrids?
5
Are there poltergeist-like undead in D&D?
8
Are there any extra saves vs turning when the target is an intelligent undead?
5
Are there any pairs of statblocks of living and undead versions of the same creature?
4
Are there any ways to give a ranger Turn Undead?
12
Are undead immune to the Daze cantrip?
4
Are there any undead that look like the living?
3
Do any undead, raised via the create undead spell, retain any memories of when they were alive?