How to address Damage/Toughness bias in M&M Tradeoffs

Right, Mutants and Masterminds is a True20 system where everything is resolved via rolling a d20. Attacks are made by rolling a d20 and adding the attack bonus, trying to match or exceed your opponent's defense, a target of 10+defense. If you hit, the target rolls a Toughness save, d20 plus their Toughness bonus versus a DC of 15+attack damage. You take a -1 penalty to further saves if you miss by 5 or less in 3E (4 or less in 2E), and every five you miss by increases the penalty to Dazed (Stunned in 2E), Staggered, and Unconscious (this is non-lethal damage, but lethal damage follows the same progression). The Power Level system limits your attack bonus, damage, defense bonus, and toughness by restricting attack+damage to 2*PL and the same with defense+toughness. So a balanced player who's playing at offensive and defensive PL 10 would have a +10 attack bonus, an attack with 10 damage, 10 defense, and a toughness save of 10. If you're following along with the math involved, that means that the base case without critical hits (which add +5 to your damage when you roll a 20), You have an 11/20 chance of hitting an opponent at equal PL, and they have a 25% chance of avoiding any damage, a 50% chance of just getting away with the cumulative penalty, a 75% chance of just being Dazed for one round, and you won't get Staggered on your first round. Assuming no re-rolls, an attacker has 11/20 * 0.5 chance to do some damage, or about 27.5%. Still with me? Then, we add tradeoffs.

Well, it would be boring if everyone were the same, right? So you can trade off defense with toughness and attack with damage. So someone at PL 10 can be +12 to defense and +8 on Toughness, harder to hit, but more likely to get hurt. That would be a +2 Defense shift or a -2 Toughness shift. Similarly trade off attack and damage. If you work it out mathematically, it's not too difficult to figure out that characters at the same PL have the same odds of hitting someone with the same shift no matter what that PL value is, and someone with a +2 Damage shift attacking someone with a balanced PL is the same as someone with no Damage shift attacking someone with a +2 Toughness shift. So, everything's fine and dandy, right? Unfortunately, no.

Where I Show Off Someone Else's Math

One of the forum goers at the Atomic Think Tank, Elric, crunched the numbers for what would happen if two players of the same PL but different tradeoffs slugged it out one-on-one, how many rounds it would take on average for one of them to go down. This is that graph: 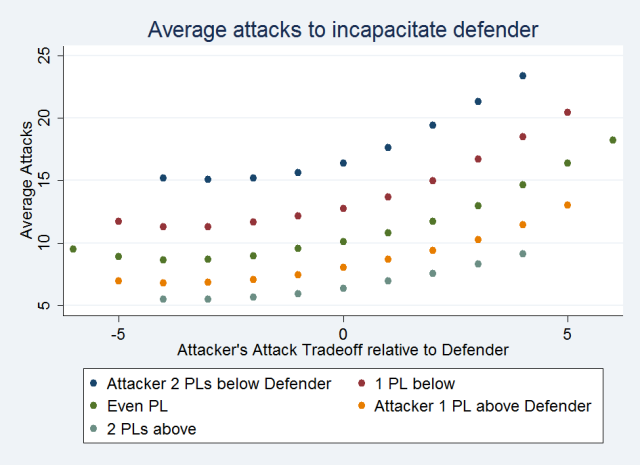 As you can see, it takes takes a little over 10 rounds when they have the same relative shift. At about a +4 Damage Tradeoff (or against an opponent with a +4 Defense shift), it drops down to about 8 rounds. And taking a positive attack tradeoff skews it even further. Skewing to a +4 Attack Tradeoff makes it take almost 15 rounds.

So why would it work this way? Well, basically it's a matter of that, when you hit a person, you hit them. Exceeding the target doesn't mean you're hitting any harder. Contrariwise, shifting towards damage increases your chance of hurt thing them more if they miss their save by more, and gives you a chance of an instant KO. It gets even worse when you consider Critical Hits because the one time you're certain that the Defensive player will get pegged is with a natural 20. Reduced Toughness, a guaranteed hit, and +5 to the damage means a defense-shifted character has little chance to make their save. 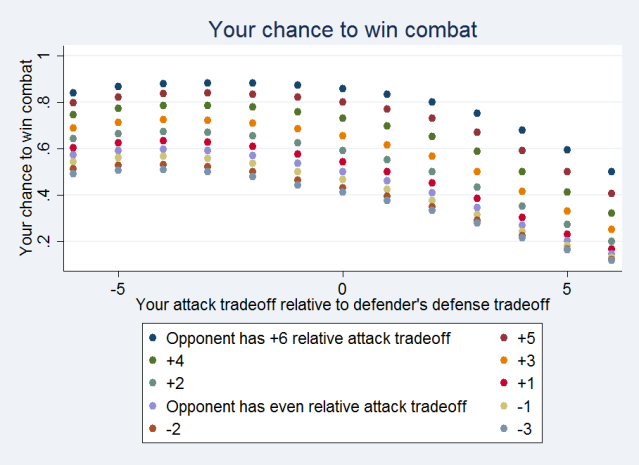 Things again get worse when you consider the Area or Perception damage, which bypasses defense entirely, Impervious which can make the attack shifted character unable to do damage at all, or the use of Feints to make an opponent Vulnerable, halving their defense. To add insult to injury, base defense costs 2 pp per rank while base Protection, which adds to Toughness, costs 1 pp/rank.

Well, one way to look at it is that the effect is really relatively minor except with extreme shifts. Another is to try to tweak the rules to increase the value of having an attack shift. I know that there were suggestions of adding 2E Autofire, where every 2 points you exceed an opponent's defense, you add another +1 of damage. Or, alternately, beating a target's defense by 10 counts as a critical, effectively giving the attack-shifted character more damage on those higher rolls. Both options obviously decrease the survival of all targets since we're adding to damage. And... I could swear that someone actually did those simulations, but I'm not finding it and my cold medications are kicking in.

Sorry for all of the natter. I felt like I had to explain what the situation is before I could ask my question. Namely, how can one make attack shifts less of a generally bad idea? Ideally, shifts should have little effect on overall efficacy (although I suspect extreme shifts will always be an issue), but I'm not certain if there's any easy way to do that. That said, after seeing some of the math on this forum, I'm confident someone out there can address this.

Honestly, I'm not truly convinced that there is a problem. As you say, the 'problem' only appears as a significant setback with extreme tradeoffs. A character at PL10 who is at 16 attack/4 damage is not someone who is supposed to be going toe-to-toe with equivalent PL opponents.

People who are attack shifted should have a thematic reason for the shift. This theme should also indicate how they can rectify the situation.

Batman, for instance, is attack-shifted. He compensates by having a versatile selection of attacks with varied defenses. He also uses things like Set-up and Teamwork to benefit other heroes (such as those unfortunate bricks who are heavily damage-shifted but can't land a blow on an agile opponent).

That said, the suggestions you give for 'fixing' this don't seem to be good fixes for me. Both are variations of having your cake and eating it too by letting accurate attacks deal more damage. Autofire, for instance, means that putting 2 points into your attack is strictly better than putting 2 points into your damage: you are both 10% more likely to hit AND your attacks do 5% more damage.

Mutants & Masterminds is a comic book-inspired Super Hero game. Not all characters are supposed to be able to do everything. If you are being presented with a foe that your typical attacks can't hurt, consider what your favorite super hero does in his/her comic when confronted with that situation. Spider-man doesn't complain that it isn't fair his punches can't hurt Rhino, he uses his combat advantages to make him charge a power transformer or get stuck in a wall and webs him in place.

You don't need a mechanical 'fix' for a 'problem' that is intentionally built into the system. If you don't want to be faced with a situation where your character can't damage his foe, don't play a significantly attack-shifted character.

You can mathematically analyze mechanics to your hearts content, but if you are doing that at the expense of a fun game, you're missing the point.

Addendum: One thing that attack-shifted people have going for them is MultiAttack. I was reminded of this by this question. Multiattack adds +1pp/rank to the cost of an Effect, and allows you to do additional damage to a single target if you exceed their defense (+2 or +5, depending on how much you beat them by). You still have to be able to damage them with the attack (so you have to beat their Impervious threshold) to do so, but it addresses the tradeoff issue in much the same way as Autofire does. It also gives you a few other combat options (hitting multiple people for a minor attack penalty or giving an ally a Defense bonus).

Edit: In response to this being called a 'poor answer that dismisses the question', allow me to elaborate on my reasoning for being 'dismissive':

Ultimately, the answer to this question is simple: work with your teammates to overcome your weakness. Watch an episode of Justice League where Batman and Superman work together. Watch Young Justice, and see what Robin does while Superboy is pummeling things. Watch Teen Titans and see why a young Nightwing is considered good enough to be on (and hell, LEAD) a team with a master of magic, a cyborg that can crush mountains, and an alien who can melt tanks from across the room.

When evaluating any system, you can't simply look at a single mechanic (in this case, trade-offs) - you have to consider the whole game.

Not the answer you're looking for? Browse other questions tagged house-rules mutants-and-masterminds statistics .

3
How does Multiattack work in Mutants and Masterminds 3rd Edition?

8
How can I simplify a series of rolls without changing probability too heavily?
3
Handling many modifiers on a probability curve
10
Game design differences between contested rolls and general attack rolls in combat
21
How can I convert D&D 5e Saving Throws into Defences?
6
What unfortunate side effects am I missing in allowing a feint as part of movement at a -10 penalty?
27
Looking for an alternative to my DM's favorite fumble table
5
Acceptable damage for Flame Blade
13
In what paradigm is +1 to hit the same as improving your chance to hit by 5%?
3
What is the average expected rounds to 1 Wound, and how is it accurately calculated?