What's the inspiration for the owlbear?

The standard explanation for the owlbear in-universe is "A Wizard Did It." Which is fine, as far as it goes, because the trope of "madman tinkering with bizarre mutations" is part of our speculative fiction ethos.

But what fractured mind actually came up with putting together the owl and the bear? In real life, I mean, as something to put in a D&D book? Mechanically it's just a funny-looking bear--it's big, fuzzy, has claw and bite attacks, and lives in the woods. What inspired the owlbear? If it was made up out of whole cloth, whose brain did it spring from? 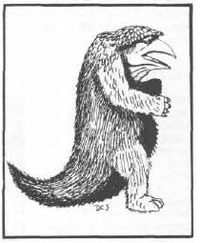 And why does it look like that? A simple image search suggests that's possibly the least frightening possible depiction of the terrifying blend of bear and owl.

It's based on a toy.

And that's all most sources will give you, because they're drawing from an article (Ed Greenwood's "Ecology of the Rust Monster" in Dragon #88, later quoted by another article of the same name in issue #346) which is actually about the rust monster, and only passingly mentions the owlbear. In fact, the original quote is so vague it's hard to tell if they actually mean to say the owlbear shares the same origin as the rust monster (a plastic toy).

But Tony DiTerlizzi gives us photos of the actual toy which inspired this freaky creature, and so here it is, the original owlbear: 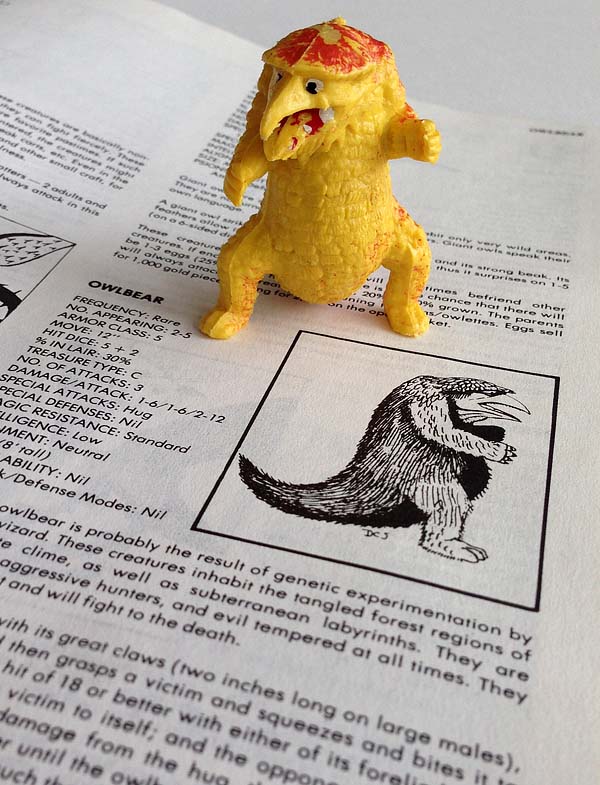 It comes from a pack of early 1970s cheap plastic toys depicting "prehistoric animals," most of them entirely made up. Look, you can see the bulette and the rust monster, too:

The origin of these toys is from Hong Kong, where they made these toys to resemble monsters from the 1960's famous UltraMan TV show. source

Not the answer you're looking for? Browse other questions tagged dungeons-and-dragons monsters history-of-gaming .

39
What's the origin of the Mimic?
14
Where did the first Dungeons and Dragons miniatures come from?
7
How big should the squares be on a battle map?
10
What are the origins of the Displacer Beast?