What Book was the Kender god detailed in?

In which book for 3.5e DnD was the god of the kender described? obviously it is in one of the Dragonlance books.

I remember reading somewhere the kender god was a really chill dude who wanted everyone to have a good time. I want to play a Paladin (of freedom) of him.

There doesn't seem to be a formal god of kender specifically, but some sources ascribe divinity to a figure named Uncle Trapspringer. He's referenced in the Notable Kender section on Wikipedia, and the Kencyclopedia (I'm not making that up) homebrews 2nd-edition-style specialty priests for priests who revere Uncle Trapspringer. An entire book, Tales of Uncle Trapspringer, remains available, and here's a list of quotations and a facetious Chuck Norris-is-awesome-style fan-made list of his possible inventions.

Most kender appear to revere Reorx or Paladine in the guise of Fizban the Fabulous, though.

I think that that would be the Dragonlance Campaign Setting. Cover shot of the book: 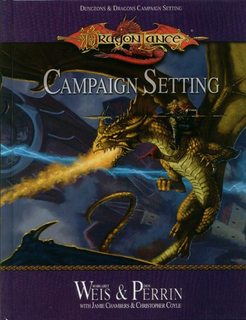 The only mention of Kender and religion in it is as follows (p. 30):

Though kender recognize all the deities (to avoid hurting any god's feelings), they hold Branchala, Chislev, Mishakal, and Gilean in highest regard. Reorx is viewed as a grumbling but benevolent grandfather, but kender do not specifically praise him.

The book further mentions that because of Tasslehoff, some kender also regard Fizban (one of Paladine's avatars) as a revered deity.

I personally am tempted to go with Branchala as the primary deity because the description of him fits the most with my idea of kender. The deity's description (p. 121) begins as follows, for instance:

The Bard King, Branchala, brings joy to the people of the world through melody and merriment with his unending song of life.

The idea of a god whose main goal is to make people happy seems to fit really well with the general wanderlust/careless nature of the Kender.

Not the answer you're looking for? Browse other questions tagged dnd-3.5e religions-and-deities product-identification books dragonlance or ask your own question.

11
How can I improve damage for a 2e rogue? (Particularly a Kender handler)
12
Where are the rules about what sources are primary?
6
Can someone identify this specific Dungeons and Dragons product I picked up at a thrift store?
7
Help me re-find this role-playing story
5
What is the name of the book describing a prestige-class called 'Hawk' (I think)?
9
Can any D&D god grant a Cleric spells?
68
My player wants to watch the world burn
7
What's a good build for a goliath sniper in Dragonlance?
7
What was corrected in City of Mist between the 2017 and 2019 printings?