I notice while reading the AD&D 1e manuals there seems to be a heightened importance on the tracking of time compared to when I was playing 4e. I agree with this, I think it helps the game world become more immersive.

But it seems to be quite the chore to calculate exactly how long the players have been wandering through this forest, dungeon, or town. I'm not sure which is the best way to track combat's segments and rounds, either.

As DMs, what have you used to keep track of time in-game in a simple and efficient manner?

You can also use this to track time left on spells, by having a separate pool of counters that you also take from whenever you add to the 'time passed' pile. When this pool is empty, then the time on the spell has run out.

If you don't have counters, you can use anything else you have to hand. Things like dice, unused minis, pieces from board games and the like are all good choices. I usually use tiddlywinks because of the small size and the large range of colours. Plus, they're flat so they are easy to store and you can stack them. 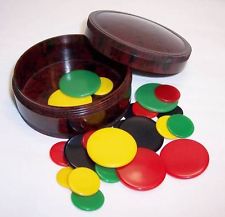 This may seem counterintuitive, but one thing I did that was both simple and efficient was to avoid getting too detailed about it when detail didn't really matter. If the scenario doesn't demand meticulous tracking of time, a ballpark figure will often work quite well and will save time and effort that you can put into more interesting parts of the game. So long as the players feel you're being reasonable, and not trying to waste their resources (say, torches for an underground jaunt) you're not likely to get complaints.

Also, in a typical 1e setting, you don't even have to be specific about "what time it is" except when PCs are in a sufficiently advanced town that employs (relatively) accurate timekeeping anyhow..."late afternoon" is at least as meaningful an answer as "4 PM", since it indicates that you're closer to sunset than noon and that daylight is going to be waning in a few hours (or less, if it's a winter-has-shorter-days world like our own).

I've used a middle ground among these answers: I ballpark time when it's not critical, and when it is (in combat, or exploring a dungeon) I track time meticulously.

Ballparking time is easy enough and doesn't require any paraphernalia. It feels somewhat awkward at first, but soon you get more skilled with estimates, communicating them clearly, and generally managing time that it becomes second nature.

Meticulously tracking time does benefit from tools. (I've not used chips/counters, but I expect they work about as well as the solution I settled on.)

Using the turn-tracker revolutionised my dungeon-running experience. Rather than having to constantly keep in mind how frequently bookkeeping needed to be done (e.g. making sure to remember "every 6th turn tell them to rest… hm, was that last turn the 4th or 5th since last rest?") and all the other details, the dial simply told me. All I had to do was remember to turn it a notch and announce the passage of time whenever an exploration turn of 10 minutes was completed (which was sometimes ballparked for non-standardised activity), and it reminded me of the bookkeeping tasks I would otherwise often forget and need to fudge later to make up for.

I noticed a corresponding heightened respect for the dungeon's risks in my players too—they were acutely aware of the torches and time passing, and the pressure of the occasional wandering monsters (made in secret of course, without revealing the schedule) gave them a keener appreciation of the risks entailed by spending unnecessary time in the dungeon. Rather than waltzing about the dungeon with relative impunity, they became alert and strategic, being careful at times and rushed at others according to their resources, situation, and goals. Rather than leaving it to me to decide for them what was "unnecessary" time, they could make that choice for themselves, underlining the strategic elements of dungeon-delving and increasing their ownership of their strategic choices. This in turn made me feel more impartial as the DM, allowing them more freedom to chart their own destinies.

It's a pay product, but I found it well worth it. For the price of a small cafe latte it had an disproportionately positive effect on both the game experience and on my own sense of organisation and competence running it.

Not the answer you're looking for? Browse other questions tagged tools adnd-1e time .

25
How can I effectively keep track of the timeline of a campaign?
20
How to handle time
8
How do I manage real-time progress effectively?