How to handle some new NPCs who enter a fight in progress?

I am GMing for the second time in my life, and do not know how to handle this situation: There are 5 PCs who walk through this map. In almost every room there are a couple of NPCs who might or might not hear fighting in another room. So far no problem. I roll some dice to decide whether they hear it or not. But IF they hear the fighting, they want to join the battle. So how do I handle this?

Scenario: The PCs and an NPC fight in area C19. Sometime during the fight, an NPC in C23 and another in C21 want to join the fight. 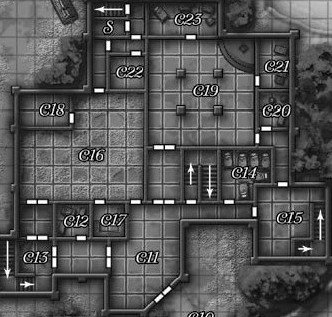 What would be the (new?) order of initiatives? Do these incoming NPCs have an attack of opportunity?

You're right that the basic initiative rules just kinda assume everyone's in the fight at the beginning of the battle and don't say more than that, so the addition of late arrivals requires some interpretation.

In general, as new arrivals become aware of and desire to participate in the battle, they should just roll initiative for the first round they're aware and then be slotted into the existing order.

There are no "attacks of opportunity" specifically granted by initiative or surprise; I assume you are referring to the surprise round of free single actions that happens at the beginning of a combat when some combatants are unaware of others, and during which unaware PCs are flat-footed both for the surprise round and until they act on their first round. The rules are written to describe the surprise round as only being at the beginning of combat, but it's certainly realistic to say that new arrivals might be able to come upon current combatants more or less unawares, even with the "360 degree sight" Pathfinder affords everyone.

What I do is, if the new combatants just want to charge in and fight, I just slot them into the initiative. If, however, they do want to sneak up on the fight and take someone unawares, then I use the standard Stealth vs Perception check to determine awareness from the surprise rules. If someone is surprised, I don't insert a surprise round, but I do afford flat-footedness to their unaware opponents till they act.

So for example, let's say Robilar (init 11) is fighting two orcs (inits 12 and 7). A pair of sleeping orcs, a shaman and a warrior, hear the fight in another room and go to join in. The warrior just runs into the fray, so he rolls initiative and gets a 13. At the top of the round, he runs in and chops at Robilar, with no special bonuses. The shaman decides to be sneaky and wants to peer through a door and snipe Robilar with a ray of exhaustion. He makes a Stealth check against Robilar's perception and wins, and rolls an init of 6. That's fine, Robilar goes on 11 but doesn't see him, and then the shaman zaps his flat-footed touch AC with a ray on 6, after which Robilar is quite aware of him (the orc doesn't have enough Stealth to try true sniper tricks with a hide at -20, so he just pushes the door the rest of the way open and fights normally).

In my opinion this merges rules compliance, speed of resolution, and realism of result.

I'm taking @mxyzplk's word that the official rules for Pathfinder offer no solution to your case and I'm going to cover the "what's the non official but good way to make this happen?" question.

D&D 3.5e (which PF is based upon) had this rule where people joining the fight later got to act at the initiative count they would have acted if they had rolled 1 more than the current combatant at the highest initiative count (Rules Compendium page 71, newcomers aware).
I think it's a good idea. Those guys have already been skipping some rounds, including the one where they realized something was going on in C19. It also helps you're not spending time to roll new initiative checks after the fight has begun.

My take on this would be the following (though I'm not sure whether the RAW dictates the same):

16
How do I handle initiative when a new force joins a combat that's already in progress?
14
Holding an NPC at knifepoint vs quick draw
2
How does Polymorph Any Object turn objects into creatures?

43
How do you handle verbal exchanges between NPCs without taking the PCs out of the spotlight?
6
How to stat up and judge the challenge of supernatural NPCs
20
How do I handle large conversations with multiple NPCs?
16
How do I handle initiative when a new force joins a combat that's already in progress?
17
How to subtly hint at “Boss Fight mechanics”
3
How do I determine the levels for some NPCs I'm building to fight the player characters?
0
Can you help me with some tips or experience on how to play a necromancer against a party of players?
4
How to make combat with a lot of NPCs more interesting and more manageable?
3
NPC Gear Advice