Are there no more elemental planes in 4th Edition?

Yes, there is now only the Elemental Chaos. The previous cosmology has been entirely scrapped. I don't miss it at all: I find the new cosmology far richer and more exciting and fascinating to work with, and D&D 4e's development team thoroughly succeeded in their mission at giving the DM more flexibility in their choices. If you want to run an elemental adventure, I suggest you seek out The Plane Below: Secrets of the Elemental Chaos, which contains all the details on the Elemental Chaos, its denizens and cities, and the all-consuming Abyss that lies beneath it.

There is still a way for your players to visit 4e's equivalent of the planes of water, air, and so on, however: it has domains. I'll describe them for you, because they're awesome.

Within this realm, the second most powerful thing to a Primordial - most of whom are in hiding or lost following the Dawn War - is a Titan. These Titans are born of an element such as Air or Earth, and many will endeavour to carve out great domains for themselves. An Earth Titan will actively grow his domain of earth by expanding its size and removing most that is not-earth from it, though if an earth titan needs air, he has no need to trade with any other domain or plane: he can carve passages through his domain and bring air into it.

Domains are not, however, constant. A Titan is a mere mortal creature (albeit an extremely powerful one), and a Titan with a domain is effectively building a sandcastle in a hurricane - it's a testament to their power they can even manage to do so. Their domain will change, it will be attacked by other elementals and titans, there are wars, and all domains eventually break apart again. Titans are creatures of Chaos: they do not like things to be constant and reliable anyway; that's something Gods prefer, being creatures of Law and order.

If your players wish to travel the planes, they should instead be travelling titans' domains. The Elemental Chaos is infinite, and domains can be huge, but they are finite. If you wish for them to have a relatively stable place to visit, that's possible. If you wish for them to interact with non-elemental creatures in the plane, that's possible too: there are some mortal species who've carved out their place in the Elemental Chaos. If you'd rather throw some chaos and turmoil into the mix, the Elemental Chaos is absolutely ready to let you do that, and is all too eager to offer ways for it to happen.

Correct, 4e removed the elemental planes. It vastly simplified the cosmology. Alot of the outer planes had to go with the reduction in alignments. The inner planes, were replaced with the elemental chaos, also as part of the simplification.

However very few mechanics in 4e force you to use the default cosmology. When I last played, (which was only a few years after 4e came out), there were none. Other than some fluff for abilities like the eladrin's teleportation power.

The cosmology is generally a setting detail.
Last time I DMed 4e, I pulled out a 2nd Ed Planescape setting book, and ran with that, without issue. 2e Planescape has a lot more planes than even 3.x's default setting. 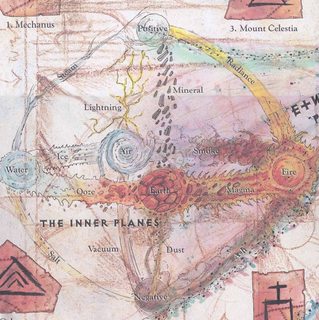 Correct - the Great Wheel cosmology was revised in 4th ed substantially. The Elemental Planes merged with the Abyss to become the Elemental Chaos.

There is a book called the "Manual of the Planes". It covers the following:

In each of the above it goes into further detail, explaining highlights in each of the above areas, depicting major cities and ports, places of worship, and other items. It also explains how there are thousands of other planes out there and gives you the rules support for creating your own.

Not the answer you're looking for? Browse other questions tagged dnd-4e planes lore or ask your own question.

16
What major differences are there between convention DMing and home DMing?
19
Is there any precedent for time distortion when traveling to other planes?
7
What happened to the Barrens of Doom and Despair during and after the Spellplague?
8
What is the Elemental Chaos like?
7
Are there any elemental plane rules or details?
6
Does Astral Projection spell fail if cast while on the Elemental Planes or Material Echo Planes (Shadowfell, Feywild)?
7
Is it possible to move between the worlds of the Material Plane by travelling through the Border Ethereal?