Meaning can a PC use the severed head of a medusa or basilisk as a weapon to petrify his opponents? 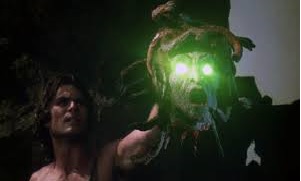 3.x is bizarrely... quiet on the subject of death

There’s lots and lots of text and rules about what does or does not kill things, and when and why things die, and on how to fix that, but very little about what being dead actually means for a creature, mechanically.

Notoriously, nothing actually says a dead character cannot act or is otherwise inhibited by being dead. Obviously, that particular statement isn’t really necessary – not even theorycrafting char-op folk accept the idea that dead characters can still act – but it is illustrative of the problem here. Death is largely undefined in its scope and effects. For another example, this question hinged on whether or not dying turns a creature’s body into an object under the rules.

So when I say that no rule actually states that special abilities in general, or gaze attacks in particular, are turned off by death, that should not come as any great surprise, and it might be a mistake to read too much into that silence; it’s part of a wider picture that is, on the whole, silent on this topic.

Now, that said, there is a feat, in Dragon Compendium, called Heads Up, which explicitly allows you to do this. You have to take the head within an hour of the creature’s death, and you only get to use the attack actively, and that only three times within the next 24 hours. It’s a ludicrously limited feat, but the fact that there is a feat might imply that without it you cannot do this. But that depends a lot on how much credit you want to give to Dragon...

Anyway, generally speaking, as a DM I probably wouldn’t allow the corpses of creatures to be used to activate that creature’s special ability. But then there’s a pretty good chance I wouldn’t use a medusa in the first place. I’m not a fan of instant-death effects, either used by or used against players. But that’s just me. For yourself, you have to consider the ramifications of allowing players such easy access to such a devastating effect.

If you do want to allow this sort of thing, the game does have a pretty solid way of “balancing” things like this: treat the head as an item, with a value, and consider that value a part of the players’ wealth when deciding how much more to give them. As an item, I’d guess something like this:

The severed head of a medusa, whose glassy eyes retain some of their deadly gaze. To use a medusa’s head, it must be held in hand, as a weapon or shield might, and it has a gaze attack. For the purposes of areas, ranges, and the like, treat the wielder as if it were the one with the gaze attack. The wielder may even hold the head up and focus it on a particular foe, as a living medusa might her own gaze.

The gaze’s DC is a mere 8, however: as the life has left the medusa’s eyes, it has no Charisma to speak of to enforce the power in its gaze.

It’s effectively a use-activated item of flesh to stone with a heavily-discounted value since the DC is so low and because of the relatively high odds of a friend getting stuck with it occasionally. The DC is equivalent to that a medusa’s gaze would have at Charisma 0. Still, even with the low DC, natural-1s automatically fail, and everyone who can see the wielder has to save every round, or else avert their eyes and grant the wielder concealment or total concealment (both of which are very useful to, say, a rogue). Ultimately, it’s not that great an item, but it’s simply too dangerous to evaluate much lower than it is (a proper use-activated flesh to stone would cost 132,000 gp).

Note that medusas are a CR 7 creature, and a 7th-level character’s wealth is expected to be at around a mere 19,000 gp. The fact that this item is worth so much more than that is, itself, a good reason not to allow this. Or perhaps require some kind of ritual be enacted on the head, one that they cannot do the same level as they actually kill the medusa, to delay it at least until levels at which flesh to stone and stone to flesh are actually available.

I'm going to say no, on several grounds:

However, it is possible to allow it in a limited form. I suggest the following:

A severed medusa's head holds only a brief remnant of the original creature's power. As a standard action, a character holding a medusa's head can target a single creature within 30 feet. That creature must make a Fortitude save (DC 15) or turn to stone. A severed head only holds power for three days after the medusa is killed.

A medusa's head can only be activated once in this manner before the power fades entirely. A character may attempt a Use Magic Device check (DC 20) to coax up to two more uses out of the head, but on a roll of natural 1 the head's snakes jump to life and bite the holder (+8 melee, 1d4 damage and poison, Fortitude DC 14, initial 1d6 Strength and secondary 2d6 Strength).

Price: 2,600 gp1. Since an EL7 encounter typically gives 2,600 gp of treasure and a medusa is a double standard treasure creature, half of the value of its treasure is in its severed head, with the rest typically in jewelry, magic items, etc.

1. Pricing guidelines on this item: A use-activated item of flesh to stone costs 2,000*6*11 or 132,000. An item with 50 charges is half that, setting the value of one charge to 1,320 gp. A staff of the same spell is 49,500 gp or 990 gp per charge, or 1,782 gp for two charges that need Use Magic Device to activate since it's spell trigger. We give it about a 15% discount for drawbacks: the snake bite, the expiry date, and the fact that you might miss the treasure entirely... but mainly because it makes a nice round number.

It's unreasonable for the head to be more valuable or powerful than this, since 5,400 gp means no medusa can carry any other treasure of its own, and the medusa is an intelligent humanoid who ought to be able to buy and use weapons, armour, etc and collect gold. A value above 5,400 would exceed the encounter level's recommended treasure, and that would require always siphoning treasure from other encounters' budgets, to increase the value of a treasure item many players won't even realise they can take.

Even so, the item is still probably underpriced, considering that a potion as a benchmark would be 6*11*50 or 3,300 gp for one charge, although the spell DC would be higher. Given this, it's probably unreasonable to make a medusa head more powerful than a few targeted shots. Retaining its full gaze attack with unlimited uses is something like a quickened mass flesh to stone every single round, and even at a reduced save DC it goes way beyond 50,000 gp, let alone the 5,400 gp practical limit for medusa treasure. That kind of item is at least low-end epic level gear.

Not the answer you're looking for? Browse other questions tagged dnd-3.5e pathfinder-1e monsters or ask your own question.

16
Animate Objects vs Animate Dead - is there anything stopping the Good-aligned 'Necromancer'?
12
Can you be afraid if you're dead?

31
A medusa and a beholder look at each other. What happens?
11
Can a basilisk turn another basilisk to stone?
5
How does a gelatinous cube's special ability engulf work?
7
Does freedom of movement protect you from a basilisk's gaze?
10
Creative ways to resolve Robe of Eyes and a Basilisk's Petrifying Gaze
32
Can a Medusa's head still be used to petrify after it's dead?
6
How wide is the arc of the medusa's Petrifying Gaze?
16
Can a cockatrice's severed head still petrify?
3
Does looking at a gaze attack indirectly still trigger the effect?