How can a land-based Druid have a Shark (or aquatic) animal companion?

A recent question asked if a Druid could have a Shark for an animal companion on land, to which SevenSidedDie responded:

If you can somehow overcome its suffocation problem and its flopping-around-uselessly problem, only then would it be useful (and likely terrifying) for a land-based druid's adventures.

Sounds like a problem worth solving. What is the most effective way for a Druid to have a common shark for an animal companion, and have it survive and be effective on land? (Actual landsharks, whilst awesome, don't count.) You are allowed to use any items, spells, feats or other features and mechanics that Pathfinder and D&D 3.5e have to offer, with the following objectives:

Solutions should preferably be affordable as early as possible, performed at as low a level as possible, and require low maintenance: a spell cast once forever is better than one cast once/day. Improving measures later on is encouraged, such as using a once/day spell until an expensive item can be afforded.

Bonus points apply if your answer works for aquatic animals in general, such as an octopus.

I'd use custom items to accomplish this. First is an item to allow your aquatic animal to walk:

When worn, this item allows aquatic creatures to grow legs and gain a land speed, exactly as the spell fins to feet.

Since all aquatic creatures either have a belt slot or a land speed (at least, all the ones I know of do), this works on all non-walking aquatic creatures. Before you can afford this item, you can use the Fins to Feet spell, which is a level 3 wizard, witch, and druid spell.

For the ability to breathe, there are a few options, depending on how much you want to stick to RAW.

First is a custom magic item of sea steed (18,000 GP). This is intended to allow land-based animal companions to work as sea-based animal companions, but it works just fine either way. This gives the animal the amphibious quality, allowing it to breathe on land as well as under water. This spell doesn't last long enough to make it practical as something to cast regularly before you gain access to the item.

Second is the Waterskin of Woe (80000 gp). This item lets you remove all the water from a creature, and "does not need to breathe, eat, drink or sleep and is immune to non-lethal damage." Since it doesn't specify what you no longer need to breathe, it should work on your shark just fine. The problem with it is that it deals 1 point on Constitution damage per day that it was used once you stop using it, and can only be used for a number of days equal to your Con score. However, there is no limit to the number of times you can use it per day, so you could easily turn it off at night, heal any Con damage with lesser restoration, and turn it back on while the aquatic creature holds its breath.

Third is the Necklace of Adaptation (9000 gp). There are a few problems with this as written. For one, it is a neck slot item, and the magic item slots for animals guidelines say that neither sharks nor octopi have neck slots. However, you might be able to make the argument that you could put it on a belt slot instead, possibly for a higher cost. Next, it specifically talks about creating a "shell of fresh air" around the user, which doesn't really help aquatic creatures. Again, I think the argument could be reasonably made to allow a shell of fresh (or salt, I guess) water to be used instead, if the item is made for aquatic creatures.

Fourth is a custom magic item of life bubble (56,000 gp). This effectively works like water wreathing, but it doesn't specify that it lets a creature breathe air, only that it lets a creature breathe comfortably. It actually creates a 1 inch shell of "tolerable living conditions", which could be fresh or salt water as easily as air. For a shark, it's probably moving water, which will likely be a tad inconvenient.

Since fins to feet is 3rd level, and life bubble is 4th level, you can have a land-based shark or octopus by 7th level for the cost of 4 spells per day. 2 castings of fins to feet will get you through an adventuring day, and 2 castings of life bubble will get you through the 24 hours that you need to keep your animal breathing. Since most aquatic creature have limited equipment slots, you will likely need to put two of these effects on the same item, likely a belt. This will cost the same as the added cost of the two effects, plus half the cost of the cheaper ability (or the new ability, if created in play).

IF you want to go the super-expensive route, you could also gate in a Personification of Fury every morning, since it has a special air breathing spell-like ability, which works like water breathing, but lets aquatic creatures breathe air.

Ruins of Azlant Adventure Path (book #2, page 29) introduces a new magic item that solves all these problems in a single solution, the Necklace of Air Adaptation: 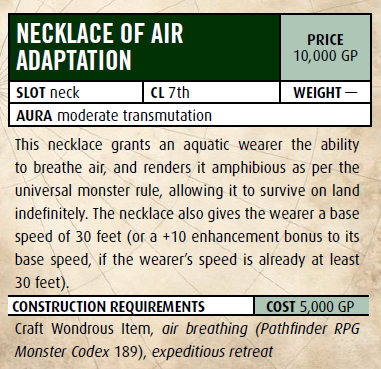 The sea hag Helekhterie designed these amulets to grant her minions the ability to breathe air and increase their mobility on land. In addition to these benefits, the necklaces allow the wearer to slip past a trap protecting the secret entrance of her lair.

The item is still not available on online resources, though it likely will make it to the Archives of Nethys in time, and maybe even the SRD.

Keep in mind that piscine and octopi do not have the Neck magical item slot, according to the magical item slots for animals table. Which means you would have to discuss with the GM for a possible adaptation of this item, most likely as belts instead of necklaces.

The Aquatic Adventures Campaign Setting book (SRD) adds many tips for aquatic creatures surviving on non-aquatic environments, though most of those are for humanoid creatures and magical solutions (such as Crystal Helm), the Elixir of Two Worlds can offer a permanent solution to any creature.

The Blood of the Sea Player Companion book also gives us the Land Limbs (non-magical) item, which could possibly be used by a slow land-speed aquatic creature (like the Electric Eel) to actually move on land with a 20 feet land speed.

If you have a witch in your group (or multiclass), the Water Lung hex will allow an aquatic creature to breathe air for 1 minute. But unlike many hexes, this isn't limited to once per 24 hours.

First, a few notes on simple ways to do this...

THE BEST WAY I KNOW TO TURN AN AQUATIC COMPANION INTO A LAND/VERSATILE ONE:

First, get an Aboleth Graft of Amphibious Skin (30,000 gp). It turns your aquatic companion into an Amphibian. The problem here is that Aboleth Grafts wither on most creatures after a few days. Not to fear! A solution is here!

Buy Dukar hand coral (CoV pg 64, 2600 gp) for you companion. This melds into them, so it's permanent, and grants regeneration abilities, boosted healing, and the boosted holding of breath. Per the text, withered Aboleth Grafts can be restored with regeneration. This means that your cheap piece of melded coral will keep your graft permanently in good shape! (If you don't want this for some bizarre reason, the Aboleth Mucus Sheath graft for 5,000 GP will also preserve your handy Amphibious Skin with a few bonuses).

If you companion doesn't natively have a land speed, there are many ways around this. Spells and items to grant flight are common and easy to get in both temporary and permanent forms. If you want the best permanency, again turn to Grafts. The following are the best, IMO:

Now, the reason I tend to go with grafts for this is that they are as permanent as you can get. I tried the magic/item method once, and the DM hit me with an enemy that was using Disjunction and Antimagic...and my companion quickly suffocated and died. Not pleasant.

Since you are a druid, the easiest way to make sure you can get Aboleth and Illithid grafts is to take the Aberration Wild Shape feat (which is awesome anyway) from Lords of Madness page 178.

Ghostwalk (which did have a 3.5e update for the original 3.0 text) has an unusual spell called Ghost Companion:

The touched creature dies painlessly. Instead of passing immediately beyond the Veil of Souls, the creature's soul remains on the Ethereal Plane and attempts to enter the Material Plane as a ghost. ... When the spell expires, the ghost creature dies the true death and its soul passes beyond the Veil of Souls. It can be raised or resurrected before the spell duration expires.

What is unusual here is that last line -- "it can be raised or resurrected." Normally Raise Dead and Resurrection do not work on ghosts (which are undead), but this spell obviously precludes that to a certain degree.

Getting all the spells on the same list isn't particularly difficult with PF rules. The other two spells you'll need (Raise Dead: preferably the PF version | Restoration: preferably also PF version) are both cleric spells from a domain/subdomain. Any method of gaining domain spells will work (Domain Icon from FoE, Domain Staff from CC, level dips in Contemplative, etc).

You'll have to be level 9 for this to be viable, but at that point this suddenly becomes extremely powerful.

Of note is that "Ghost Companion" is a days/level spell, which is what makes this work. Also note that Raise Dead has a days/level limit, which means the two will ALWAYS be in sync.

Pair these with as many CL boosters as you can for better durations.

Now, here's why this is worth the effort:

Demo: My personal preference is to use this on a Giant Squid with my druid. In addition to the normal collar qualities I like to use on it, I almost always give it an Amulet of Natural Attacks or Amulet of Mighty Fists. The Enchantment I use is Ghost Touch to retain its full melee power. I then turn it into a Ghost. Suddenly my companion has 10 stretchy reaching touch attacks that are inflicting its various touch-related powers on top of its normal damage.

Tossing this on an octopus also works great, no matter the size, because Ghosts, ofc, aren't really impacted much by size except in matters of reach and (and a few save DCs).

Use an Apparatus of the Crab filled with water, modified to have an aquarium filter. Stick the shark inside and let him drive the thing around :D

Decanter of Endless Water, for endless water supply (can be salt water), in case it spills out. Bowl of Commanding Water Elementals could be used to provide a constant flow inside the tank. Or you could summon an elemental to carry the shark inside :D

Not the answer you're looking for? Browse other questions tagged pathfinder-1e dnd-3.5e druid animal-companions or ask your own question.

11
Witch - Octopus Familiar
13
Does Life Bubble preclude the need to add legs to sharks?
1
Can you have a shark companion out when not in water?