Ways to minimize the negative effects of miniature use on immersion

Quite a number of games recommend and support the use of miniatures for combat to provide players a tactical view and tactical options. However—besides obviously having its distinct advantages—using miniatures hurts immersion: it takes you out of character (first-person view sustained throughout the rest of the game) and places you into a practically all-seeing position above the battlefield (third-person view that quite strongly supports metagaming).

What are the best practices to minimize the negative effects of the switch of viewpoint from first-person to third-person during miniatures combat?

Note, please, that the question focuses on players who prefer first-person view and deep immersion but are willing, obviously, to use miniatures from time to time. It's about keeping the pros of miniature use while minimizing the cons.

Miniatures don't have to be metagaming. They also don't need to be used for every battle or encounter. Here are a couple ways that support a few different game types.

There are many games and situations where miniatures can be treated as an in-game tactical planning tool which coincides with the battle through a "forming a plan" montage like in every spy or Fiasco movie you've ever seen. The players plan their actions through the miniatures like they were at a battle board planning the attack, and the actions play out immediately after like the voice-over explaining what is happening on screen in the movie.

This would work well for any kind of heist or thievery encounter where the players would have the chance to plan ahead for the encounter. It works in play the same as it does in the movies and if handled well it doesn't break immersion because both situations are in-game even if being experienced out of time order.

Especially in sci-fi games, but potentially in modern or magical games (through magical means) the tactical grid can be a technological/magical tool that is a literal in-game asset to the players. It is a visor, brain-interface, or psionic tool that enables them to see the battlefield as a whole in an abstracted way.

You can suck the miniatures game into the world of the game itself wholesale.

It sounds like the thing you don't like about miniatures is the mental perspective change caused by seeing (a figurine representing) your character "from the outside".

If so, my suggestion would be to replace the miniatures with something more abstract that serves the same practical function — providing a shared tactical view — while being deliberately abstract enough to avoid the loss-of-immersion effect. Basically, something that doesn't instinctively say "that's my character there" but simply "that's a map of where my character is."

There are several possible options that you could consider. For example, if you like the precision of a gridded battle map, you could keep it, but just replace the figurines themselves with abstract markers like, say, colored plastic / wooden blocks, unit markers from a strategy game, spare dice or just pieces of paper (or post-it notes) with character names written on them.

Alternatively, if you prefer a more free-form tactical representation, consider using a whiteboard and just sketching character positions and relevant environmental details on it, something like this: 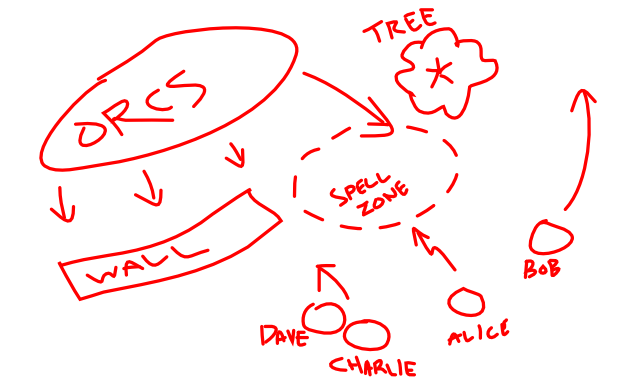 Of course, you could just use a sheet of paper for this, but a whiteboard is more convenient, in that you can keep erasing and redrawing it as characters move about.

From a tactical / metagaming viewpoint, the nice thing about using a whiteboard like that is that you can include just as much or little detail as you like. For instance, if there's a hidden NPC in the bushes, and the PCs hear him moving about, you don't have to place an actual miniature in some specific position on the map to represent him (or leave him unrepresented) — instead, you can just write "rustling" in the general area of where the sound came from. (Of course, you could also do the same thing on a dry-erase grid mat, if you prefer.)

All of this is kind of the opposite of the usual trend in miniature gaming, where most people would prefer to have more detailed and realistic miniatures. But if you really feel that seeing your character from the outside hurts your immersion, this just might be a solution.

Acknowledge Metagame Plays and Develop Practices to Counter It

In my humble experience, the best way to minimize the effect of any form of metagame is to first acknowledge what practices are metagaming and which ones are not. Some groups allow more metagaming than others, and your tolerance for it will determine your efforts against it. For instance, miniature combat may involve "seeing" around corner, but would the characters not hear something around the bend? Is acting on the knowledge of their position metagaming, or a character using their intuition? Once you have decided what level and actions of metagaming is acceptable/not acceptable, you can go something about it.

Fighting the meta-game plague requires players and the GM to ignore certain pieces of information, because acting on them would be metagaming. In the case of miniatures, you would need every person to dedicate themselves to "seeing" what their mini would see. You may also need the DM and the players to point out metagame plays during tactical combat. This could be an explicit part of the social contract for a group, but there are risks associated with this as well.

This May Kill the Fun of Playing

One of those risks is the threat of players and DM arguing about which plays are influenced by metagame information; this can easily sap all the fun out of playing. For instance, consider barging into a room because you heard a scuffle; can you position yourself advantageously when running in, because your character can see obvious things (like who's who and who's doing what), or do you need to make some sort of observation check before moving? Perhaps your character is about to get flanked. Does your character hear the people coming up behind them above the din of combat, and can they reflexively react, or must the player direct their character to do so? This argument can quickly get heated, especially if your character is running on critically low hit points!

More issues may arise, but some house-ruling and experimentation could lead you to a satisfactory set of rules to prevent this kind of meta-gaming. You must establish what information can be acted upon, and what information can not. It will require a dedicated effort on the part of your group. Moreover, your group needs to answer; is this worth it? (Alternatively: does countering this specific type of metagame plays sap the fun or usefulness out of using miniatures?)

One option is don't use miniatures. You are praising miniatures for presenting tactical options clearly, but also criticizing them for having an all seeing eye.

If you feel that it is more important to representing the lack of absolute knowledge, then just describe the combat.

GM: "There are a bunch of guardsmen coming in through the door, while the thief who stole back your stolen good is heading for the window."
... few rounds later ...
Player1: "I attack the guardsman that is most wounded. So I am next to [PC2], right?"
GM: "Yes, you will be however you are quite a ways away, when you went after the thief, so that is a charge action."
Player2: "and he is going to provoke an attack of opportunity from the rest of the guards right"
GM: "Yeah"
Player1: "But it will be worth it, my defence is good and then we can flank"

If things get too confusing, eg a player can't quite understand what is stopping him from walking out the door. Then a quick sketch on a whiteboard or some paper with x's for player positions is fine.

Sure the occasional chance to flank might be missed, or the occasional attack of opertunity, but being in a big fight is confusing. people don't always get off there attacks of opportunity etc. In many games this kind of thing is not an issue (Eg Attack of Opertunity is actually a really rare mechanic.) If it is a big issue then this might not work so great, and it depends on your play style. How used to being flexible/vague the GM and players are. It can take practice.

Not the answer you're looking for? Browse other questions tagged system-agnostic combat miniatures or ask your own question.

16
What does the symbol on the bottom of a WotC miniature mean?
37
What ways are there to anger the PC's without angering the players?
7
Simpler ways to keep track of the player's wealth/purchasing power?
9
How can a GM aid switching between the immersion and the meta level?
16
What are the best ways to move and full-attack in the same round?
35
How can I bring a player back to immersion and away from the distraction he brings to the table?
67
Players playing weird characters breaking the immersion of my group
17
What is the origin of the name for the tabletop miniature company “Ral Partha”?
15
How to retain a player who resents another player?
11
How to Roleplay an Intimidation-Oriented Character Without Being a Net Negative for the Party