Can a character without limbs use the monk's abilities

This is related to another question I asked a few days ago about odd races as characters. One of the player's has a flail snail character that he has made that has levels in monk. Looking at the monk's unarmed strike ability it mentions that,

A monk's attacks may be with fist, elbows, knees, and feet.

Obviously, a snail does not have any of these appendages. Does this mean that the character does not benefit from many of the monk's class abilities that require unarmed attacks, or are there rules to allow a character like this to substitute their natural attacks?

A flail snail is not a playable race in the first place. As a result, this and about 100 other questions about how they fit into the rules and how they manage to adventure will have to be the result of GM discretion. I don't see any value in trying to answer them one by one because they are going to be by nature arbitrary - if the GM is set on allowing this character, then he'll be forced to let things like this work to "make the character viable" regardless of RAW or good sense. If he wants to play a flail snail, and then he wants to play a flail snail monk, you're just a big ol' meanie for preventing it, so you are constrained to allow it. Y'all have made your bed, now you have to lie in it. He just smacks people with his tail or shell or eyestalks or whatever. Done.

Oh, and of course he can grapple too. Stop trying to control my character! 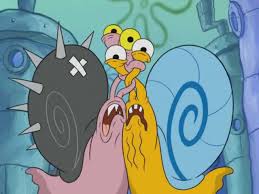 Unfortunately, yes, though this is a strictly 3.5 answer. Having limbs isn't necessary to be a monk, so long as one is mobile.

Wizards itself has published the Gelatinous Cube Monk 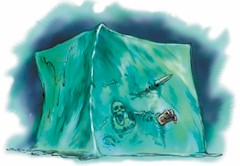 This highly improbable creature is the result of taking the rules to the very limit. Giving an ooze class levels is usually impossible because these creatures don't have Intelligence scores. However, the fiendish template provides this cube with a 3 Intelligence, and off we go.

Monk levels seem to fit very well with the gelatinous cube's other abilities, and the monk class gives the creature some really humorous powers, such as deflecting arrows. Barbarian or fighter levels would work too, but a gelatinous cube is limited in its use of feats became of its generally low attribute scores.

The real question with this creature is where it could learn any monk skills. Ooze monasteries aren't exactly plentiful, after all. It must have studied on its own, just like Miyamoto Musashi did.

And here's some tedious discussion of that article on the nature of how a cube can do monky stuff. Short answer is with a large amount of handwaving.

Yes, you are right that something without a fist, elbow, knee or foot (which excludes quite a lot of things unless you include claw as fist, hoof as hand etc) cannot be a monk.

But, a flail snail HAS a foot, as do regular snails, so they can make attacks as a monk. From your Flail Snail link:

A flail snail's foot adheres to surfaces so well that its 10-foot climb speed applies even to perfectly sheer surfaces and ceilings, with no chance of the flail snail falling off unless it is actively pinned and peeled away as part of a grapple.

Wikipedia agrees that slugs have feet.

Answering in the spirit of your former question Players playing weird characters breaking the immersion of my group :

"This race has no limbs. Its natural attack is to spit slime (or whatever, I don't even care to read its description). You won't get a functional and mechanically desirable result. If your idea of fun in a RPG is playing something dysfunctional (even if for role-playing reasons), then here you go: A fully dysfunctional snail monk. You can pray all you like, but not bend your non-existant knee. And you will fight like every other snail unless you find an ability of the monk that really fits, e.g. fully mental feats."

Major part of RPGs is about consequences:

You go around killing. Guards will try to capture you for murder.

You are a psychopath from a peaceful elven tribe. The tribe will ban you.

You are a snail. You can't hit or kick.

If you're a player: Support the GM in the decision. Demand for the consequences. Tell him what IG consequence your character will draw, if the snail hinders your character. E.G. abandon the snail. Even a paladin might reason "It is more of an animal than anything else, so the rules of my order do not apply". After all if there is no consequence for the snail-player, why should there be consequences for you?

You will see, if those players will stick to the dysfunctional race, because they like the totally different role-playing experience. If so they might earn a certain respect for it. But I'd expect them to drop it and go for another munchkin idea of disruptive egocentric stuff that combines with power gaming.

67
Players playing weird characters breaking the immersion of my group

3
Does the number of unarmed strikes increase with BAB or limbs?
0
Holy brawler for Wrath of the Righteous
4
How many attacks would be in a full-attack with this Ratfolk Monk/Ninja?
3
Monks, natural and unarmed attacks, and Feral Combat Training
1
Does ki leech and ki focus bow require a swift action to activate, or are they like ki strike?
6
Can I mix ranged and melee attacks in a Full Attack?
6
Can a the caster of Magic Fang designate a natural attack the target doesn't have?
2
Does a Sacred Fist stack Monk for Unarmed Strike?
7
Does Monk's Robe affect a Monk of the Silver Fist's gauntlet damage?
0
Determining Genie Style AoE damage