What is the maximum altitude an Aerodyne can fly?

After many years without narrating one single Cyberpunk 2020 adventure, I decided to try a one-shot adventure for a monthly get-together RPG session we have here.

I have almost everything set as for revisiting the rules, but one thing escapes me completely: what is the maximum flight altitude that Aerodynes can reach? I have only the corebook, so I don't know if this is covered in another book, or if there is errata somewhere that covers it.

This will impact in one scene in particular, which can be changed if no one knows. However, I'd like to be true as possible to the rules as written and setting. I can change the scene, but it would be nice if I could use one of these "flying cars" to add some fun for the players. Specially because there is a high probability of people that aren't familiar with the setting taking part.

If there is nothing official in any supplement, does anyone have any house rule for them? Or if there is a rule of thumb among Cyberpunk 2020 players?

In the past I never really cared about it, but nowadays I tend to make less fantastic plots and stories to build a better flow into the adventure, no matter what scenario I'm using. I believe attention to detail can result in a better experience for players.

Cyberpunk 2020 claims to portray a dark, gritty and relatively realistic future, so let's try to extrapolate from there.

There's no spec regarding the service ceiling of AV's in Maximum Metal, which is supposed to be the definitive guide on such equipment. However, there are a few passing references that identify the powerplant of an AV-4 as a future variant of the Rolls Royce Pegasus turbofan engine, which powers the Harrier Jumpjet today.

The Harrier is a fixed wing aircraft which can only hover for mere minutes, as the engine is put under great strain, so it always reaches its operational ceiling of ~15.000m (~50.000ft) flying like a conventional jet. So I assume we cannot take that number as a reference for the AV-4's flight ceiling, as it has "the aerodynamics of a brick" (Maximum Metal as I remember), because it only generates lift by engine thrust alone.

This article on the hover limits of the Harrier explains why the hover performance of the aircraft is a complex equation that depends on multiple external factors, but there's no definitive conclusion regarding a ceiling or hover time.

We must assume that since the AV-4 flies by engine thrust alone, the Pegasus variant it has must be free of the critical performance constraints of the original, especially the need for water cooling under full vertical thrust. It either runs much cooler, or has other means of active cooling, or can withstand much higher oprational temperatures (which is inherently quite dangerous to fly and land in an urban environment).

Putting that aside, we can assume that the AV-4 or any similar aerodyne can continue to rise (much like a rocket) as long as the engine can provide thrust in excess of the weight of the aircraft (plus the drag created by upward motion but let's disregard that for now). However, the thrust of jet engines are affected by the amount of air they can suck in, which decreases significantly with altitude. This could let us calculate a theoretical service ceiling for the AV-4

The latest Pegasus has a thrust of 106kN at sea level, more than doubling the original 1960's engine that produced 51kN. Let's assume our future Pegasus is even better, producing something like 120kN at sea level. This is much higher than the 36kN of force required to hold a 4-ton brick aloft, but it drops rapidly with altitude. Lets assume with a scrimpy safety margin that we need at least the third of the engine thrust at sea level (=40kN) in order to maintain hover at altitude. The thrust of the engine is somewhat directly proportional to air pressure, and air pressure drops to a third of its sea level value at around 8.400m/27.500ft. A conventional jet performs better due to forward motion ramming more air into its well-designed air intakes but this is not a factor when hovering.

However still, there's the issue of actually reaching that altitude before hovering there. As the engine thrust drops, the vertical velocity would drop as well. At maximum thrust, our future Pegasus could actually be burning more than ~2kg/4lb of your favorite future fuel every second. Assuming a max fuel load of 1000kg/2000lb, our AV-4 has about 500 seconds to do what it will at max thrust before becoming a 3-ton brick in the sky. (FYI, I'm assuming a 1-ton airframe, a 1-ton powerplant, a 1-ton fuel load and a 1-ton payload, including the crew here)

A further complex calculation with these parameters reveals that with a direct vertical full-throttle jump start from the ground, the AV-4 can launch itself to above 9.000m in about 150 seconds, spending a fifth of its fuel, but it cannot maintain that altitude and must drop back to around 8.000m before it gains enough vertical velocity to recover from the fall. The experience for the occupants is quite like a rocket launch, where they experience 3 g's at liftoff and weightlessness at the apogee. 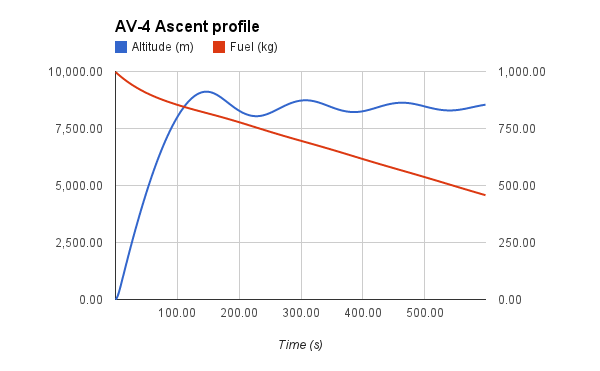 The AV-4 spends half its fuel by the 9-minute mark just trying to stay up there. And it can barely move sideways as all its available thurst is spent on maintaining altitude. 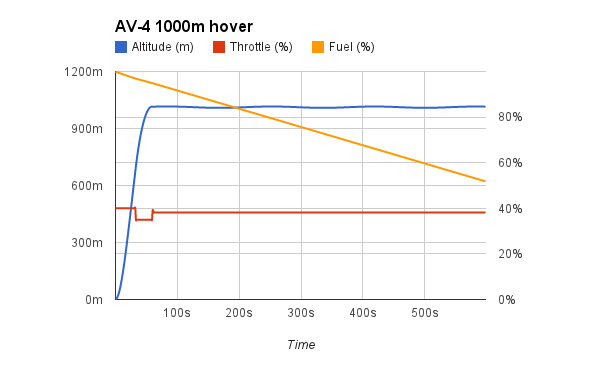 A more realistic urban scenario of popping up to 1000m under 40% throttle and keeping station there fares only slightly better. The AV-4 hits the halfway mark on the fuel tank just a bit after 10 minutes. And the throttle is very touchy. It takes precision throttle adjustments in 1:10.000 steps to properly keep a stable hover altitude. A fly-by-wire avionics system can handle that but don't lose it. If you do, then you are a 4-ton brick in the sky with lots of fireworks bolted on.

As you can see, just the fuel requirements of thrust-only flight would in fact make the AV-4 a very infeasible aircraft.

So the real fact is either very convenient or very disappointing depending on your perspective: The AV-4 flies under fictional power. It has a fictional performance envelope, with critical parameters just on the edge of where the story is occuring.

So if you have a critical scene on the roof of the Arasaka tower, that is the exact altitude that an AV-4 can barely hover. Of course Saburo has a modified aerodyne that can conveniently exceed that constraint so that he can come visiting as needed.

I found this article about some (expensive) real flying cars. That could be some base numbers to start with.

Not the answer you're looking for? Browse other questions tagged cyberpunk-2020 or ask your own question.

29
Justifications for the existence of cyberpsychosis
8
What does a weapon's ROF mean and how do I use it when shooting?
10
Where is the damage rule for hot loads of .357 mag cased ammo?
9
Are the Increased Stat borg option’s listed maximums in Chromebook 2 the maximum you can buy or the maximum for the stat?
2
What are the Costs of Offensive Drugs and Poisons?
7
Can a Medtechie use Medical Tech for First Aid checks?
12
What are the difference between Cyberpunk 2020 and Cyberpunk Red?
4
Can you be detected while invisible?
8
As a player, how can I avoid stifling new players but also avoid letting things stall?
7
A Netrunner using a stealth program, apply the stealth effect only to his icon or also to all his programs active in the Netmap?