What are the planes of D&D 4e? Where did they come from, and how are they connected?

I understand that in D&D 4e's default setting there are planes, and I know a bit about them: the material plane is where the people generally are, and there's a "feywild" where the Eladrin and other weird things are from. What are the others? How do they connect with each other?

This is a preservation of the original version of another question, before it changed completely.

There are several fundamental planes: the Astral Sea, the Elemental Chaos, the Mortal World, and the World's two echoes: the Feywild (from which the Eladrin came), and the Shadowfell. And then there's Sigil, the city of doors, a plane which doesn't quite fit in anywhere and may not rightly exist inside this particular cosmology at all.

There's also the Far Realm, which exists outside all of that.

Wizards provided a marvellous map of the planes in this excerpt on the planes. It contains a lot more detail of what's in the planes, but you can glaze over that for now and focus in the big bits: 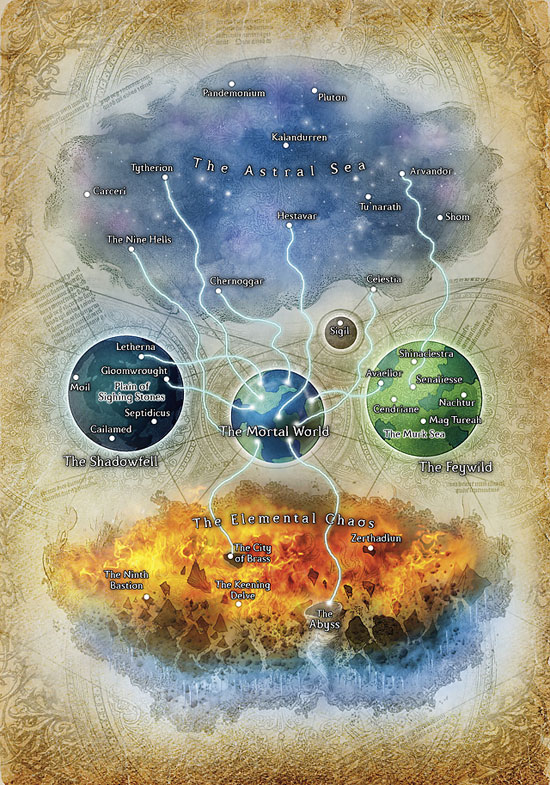 A full understanding of the planes is inseperable from how they came to be. Bear in mind, all history of the default Points of Light setting is (mostly) from the perspective of living mortals, so all the details are fuzzy and there's a couple of versions of everything. That's deliberate and works to your benefit as DM: you have plenty of room to make stuff up and come up with alternatives. The important parts of the history are clear, though, assuming they're not lies.

A Brief History of Life, the Universe and Everything

Citations in this section are from the Manual of the Planes (abbreviated to MOP), the Dungeon Master's Guide (DMG), and The Plane Below (TPB), the sourcebook for detail on the Elemental Chaos. (For further reading there's also The Plane Above for the Astral Sea, and specific sourcebooks like The Shadowfell and Underdark, but I'm not quoting those here.)

The Astral Sea and Elemental Chaos

Once upon a time, there was only the Elemental Chaos and the Astral Sea. Nobody's sure how these came about, because this happened before all mortal or immortal life.[DMG 160] In the former arose the Primordials, the embodiments of Chaos.[DMG 160, MOP 70] In the latter arose the Astral Sea's version of the Primordials: the Gods you probably know well, and the embodiments of Order.[DMG 160]

Birth of the Mortal World and its Echoes

Eventually, the Primordials wanted to create something altogether new. They took some of the infinite stuff of the Elemental Chaos and crafted the elements into a great, spherical world - the Mortal World in its earliest form was born, then still just as hostile and chaotic as the Elemental Chaos itself.[MOP 70] The Primordials further stripped away the brightest parts of the world, and the darkest shadows of the world, and cast them aside. They would eventually recoalesce: the brightest parts gathered together and became the Feywild, and the darkest parts became the Shadowfell.[DMG 161]

Later, the Gods would take notice of this experiment. They visited the Mortal World and stabilised it, separating it into seas and land masses, and sprinkling it with life, making it what we know now.[MOP 70] The Primordials eventually discovered this, found their work of art desecrated with Astral life and stability, and wished to return it to the chaotic thing it was before.[MOP 70] Thus the Dawn War was fought between the Gods and Primordials over the fate of the World.[MOP 70] The Gods won, and the Primordials who survived the conflict were imprisoned or scattered far throughout the Elemental Chaos.[TPB 65]

The three planes, however infinitely large they are, are only a small bubble in a greater and unknown cosmology. Beyond all we know lies the Far Realms, the origin of many aberrant creatures who are strange and alien and generally seem to want us dead or just make us end up that way anyway.[MOP 30] Please do think of Lovecraft, and think of it as only the least of what the Far Realm may have to offer.

If there's anything that actually knows how the planes came to be, it's probably from the Far Realms, but it's unlikely you'd be able to communicate very effectively with whatever ancient thing witnessed the birth of the cosmology itself.

This demiplane serves a role as hosting many secret gateways between the various locations in the 4e cosmology. Elsewhere in a comment on a now-deleted answer, Wesley Obenshain summarised this plane very well (and with more knowledge than I have about it):

Sigil originates completely outside the 4E cosmology. The City of Sigil was a demiplane controlled by the Lady of Pain which itself was located inside a torus on top of the infinitely tall Spire at the center of the plane known as the Outlands which is, in turn, the primary access point to the various aligned plains. Sigil and the Lady of Pain themselves have no confirmed origin.

More info can be found in the Manual of the Planes on page 25.

How are they connected?

Sigil, the City of Doors, is connected to assorted doors everywhere.

The Mortal World, Shadowfell and Feywild are intimately connected. Wander through the brightest, wildest places in the Mortal World and you may find yourself stumbling into the Feywild,[MOP 34] and likewise for the deepest or darkest places.[MOP 50] Connections come and go, and people do get lost there, just as things there may get lost here.

Of course, creatures who know the proper rituals, possess the proper powers, or who know where the breaches between the planes can be found, can easily traverse the realm. There are several of these methods in the Manual of the Planes.

There's a few, but here's two. The nice thing about how D&D 4e's lore is handled is that fan theories can pretty easily be adopted as truth in your campaign's lore.

The Shadowfell and Feywild: our past and future

The Feywild and Shadowfell may represent the past and future of the Mortal World: the former is the World an eternity ago when it was young and teeming with life, while the latter may be the World's distant future, when it is ancient, barren and dying.

The planes are an impurity in the cosmos

It's possible that rather than aberrant creatures from the Far Realm being the intruders, we are. Our small bubble of creation may actually be an impurity and infection in the greater cosmos, and the aberrant creatures are the white blood cells working to cleanse it.

(Both of these I picked up from another of our members, BESW.)

Not the answer you're looking for? Browse other questions tagged dnd-4e planes lore cosmology .

3
How are the Planes in 4e connected?
4
How many planes are there?
3
World Axis Cosmology

5
Where did the Eladrin come from?
28
Are elves native to Faerun/Toril, or are they immigrants from elsewhere (like the Feywild)
17
Defining Realms, Worlds, Kingdoms, Planes, Dimensions and the Multiverse
22
Does any lore text explain why the planes of Acheron, Gehenna, and Carceri are the alignment they are?
13
Are there any lower-level means of travelling between planes of existence?
9
How can a PC determine what planes a Cubic Gate is linked to?
5
How is a soul different from the living creature that it came from?
8
Which Planes Border the Astral Plane in the Great Wheel Cosmology?