How fast do PCs tend to level?

I'm planning out a campaign to run with some friends. None of us have played D&D before so this means a few questions are presenting themselves. The campaign itself is set in a custom world but will utilise the D&D 4E monsters and mechanics to make things simpler. The basic synopsis is that the players will make their way to the top of a large mountain to fight a dragon, having lots of adventures on the way. I'm worried however that a dragon may be too powerful for my adventurers, and was wondering what I can do to counter this, if anything. My first idea is ensuring the trip up the mountain levels them up enough to fight the dragon, but I don't know how long that means the trip must be or for that matter, what it will entail.

To fight a dragon, what level should the PCs be, how long will it take them to get there and what do I need them to do for them to make it?

In DnD 4e, characters tend to level every 8-10 or so encounters. Depending on the exact Encounter Level of each fight (or noncombat encounter (eg Trap). Faster if the encounters are above their Character level, slower if below, Also faster if they are getting XP for completing a story/dungeon/quest, and if you have any house rules like XP for good roleplaying.

I personally find calculating Encounter Level, and XP per encounter to be boring and pointless, and I just tell the party to level up when I feel it is appropriate. Generally I like to do it every 4-6 encounters (which corresponds to every other session or so), but that is perhaps a little more rapid than most like. This is a house rule.

A Dragon (or any enemy) can be as tough as you make it to be. Even if you don't want to modify its stats yourself, there are a large variety of dragons in the monster manuals.

In the core monster manual , there is a Young Black Dragon, which is "Adventurers First Dragon". It is a Encounter Level 4 Monster on page 75. I'm sure since I last looks there are lots more dragons in the new monster manuals.

In the monster manual or in a adventure module, each monster, or group of monsters has a Encounter Level listed for it (see below). Eg there is a Encounter Level for a gang of goblins with a goblin boss. This is listed with the Role, for PC's the Black dragon is a Solo Lurker. Solo means it is a valid encounter all on its own, Instead in this spot it might say Leader indicating it buffs others, or nothing, indicating it is designed to be part of a Encounter Group. A solo monster is extra tough to take into account that it gets to make less actions -- it has one turn to act, while the party has one turn each to kill it. (No Solo monsters will get destroyed almost instantly if the party can encircle them and all just beat down on them)

Lurker describes its its Roll -- like Leader or Controller, more details on the in the DMG.

There is a formula to guide you in calculating your own Encounter Level it is on page 56 of the DMG (As I said I don't bother, but it is probably worth it when your starting out and can't judge the difficulty by eyeballing it and fudging/modifying stats on the fly). If you just combine monsters into a encounter group, you can just add up the XP. Most of this stuff is convered in detail around page 56 of the DMG

A Single Monster from the Monster Manual:

Thanks @kviiri and @Tobold for the corrections (see comments).

Simply put, Take the total XP of an encounter, divide it by the number of PCs, and you are left with the amount of XP each party member will receive for defeating all the monsters in an encounter. If you are planning a straight-up murderfest then thats all there is too it. Calculate the XP required to raise each character to the same level as the dragon (I assume a solo monster) and make sure there is a enough XP in the encounters leading up to the dragon to ensure PCs level. If your players fight more monsters at once/monsters worth more XP then they will simply level faster. A word of caution though, PCs should only fight monsters a level below, the same level, or 1 level above from them. Any wider difference in levels will result in fights that are either too easy (monster level too low, monsters missing the PCs all the time) or too hard (monster level too high, monsters hitting the PCs all the time and the PCs missing the monsters a lot).

The table below has a nice example of exactly level appropriate XP budgets (remember you can always increase them to make it tougher/have the PCs level up faster). 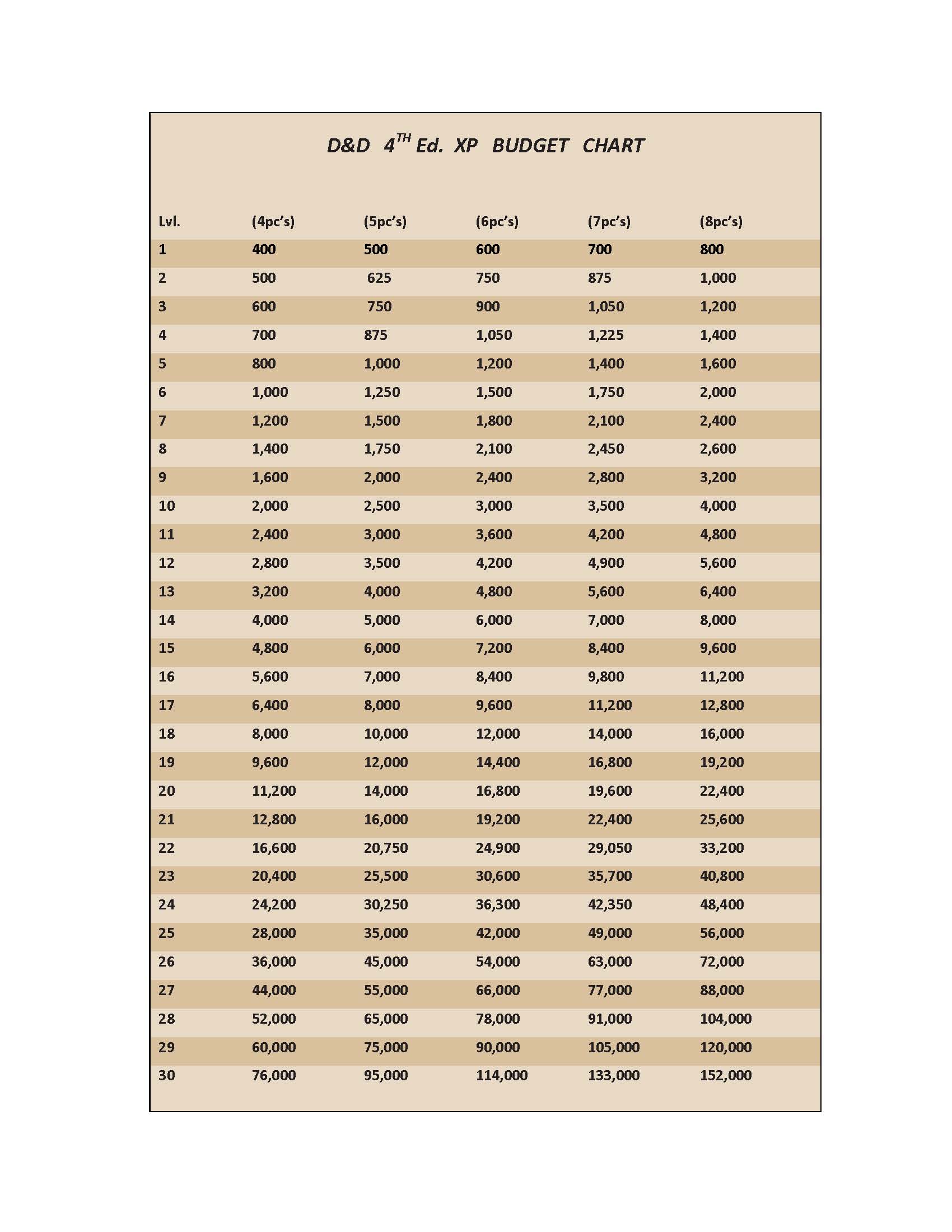 You can give XP for things other than combat encounters

There is no rule in 4e that states players only receive XP for killing monsters, PCs can also gain XP for solving puzzles and completing quests/objectives as well as disarming traps. This is quite a common feature in official 4e modules/adventures published in Dragon magazine and one I've used heavily in home campaigns.

Level PCs when story appropriate or after X number of encounters

PCs level up when they need to or after achieving an objective. Alternatively you can just level the party every couple of sessions. I would suggest at least 4 sessions between leveling because I've seen first hand how PCs leveling too rapidly can result in players forgetting a lot of their newer powers and features and combat slowing to a crawl as everyone takes long turns to evaluate all of their options.

Not the answer you're looking for? Browse other questions tagged dnd-4e character-advancement .

8
How should we choose classes as a new group of three players?
10
Handling a dragon lair's treasure consistently with treasure parcels
4
How can I use the updated Dragons against my players without absolutely killing all of them?
4
What effect on the advancement math comes from re-tooling the experience system in 4e?
10
My campaign calls for characters of a certain level for the final boss fight. How do I best get them there?
12
How can I balance practical spells with RP spells?
3
What +hit and +damage should my campaign's PCs have around level 11?
14
What do characters need to do to level up?
12
How to get from 3rd to 5th level in "The Forge of Fury" using XP?