The rules for Upgrading Magic Items states that you can add new abilities to your items by paying 50% more gold. It does not put any limit to how many abilities you can add to items such as wondrous items while Weapons and Armor are limited by the +10 enhancement limit.

Aside from price limits is there anything stopping Magic Item Crafters from making something like a belt with the power of every belt?

It 'might' be something Pun-Pun has created in his infinite boredom and munchkinry, but otherwise, its not really plausible.

A lot of the features from your belt conglomeration will cancel each other out, though, as almost all of them count as enchancement bonuses, which do not stack. Dodge, circumstance, and a few others that are explicitly stated are the only kinds of bonuses that stack in Pathfinder. In the calculations portion, I'm going to exclude these kinds of redundancies and only look at items that will provide unique or the highest benefits per bonus type/application.

Purely mechanical RAW? No, the price element is the only major deterrent there if you're just buying this such an item.

However, the amount of time spent crafting such an item is also dependent on the cost: 1 day per 1,000gp. The proposed 'omni-belt' we're looking at creating would take a person a very long time to craft, as well as requiring knowledge of (or at least access to) all the spells and specific prerequisites (like being a Dwarf for the Belt of Dwarvenkind).

The Bladed Belt turns your omni-belt into a masterwork slashing or piercing weapon of your choice. This gets weird really quickly when comparing it to weapon enhancement limits.

This omni-belt can turn into a snake, constrict, function as a tail, a sword, has special firearm loading pockets, allows you to swim, generate a plague, and do many, many, more things.

I attached a screencap of the sheet that I just ran the numbers in, but in short, the cost comes out to 460,275gp when crafted, or 920,550gp sale price. This takes 461 days to create (much less time than I initially thought it would!). I'm also using the Belt of Physical Perfection instead of each of the three individual +6 stat belts, as suggested by the Magic Item Creation FAQ, and only using the best variant of belts with different levels (lesser, greater, etc)

It's possible, but far from ideal, from the cost issue alone. Keep in mind, a crafter makes things to sell, and something like this would sit on a shelf for a long, long time. 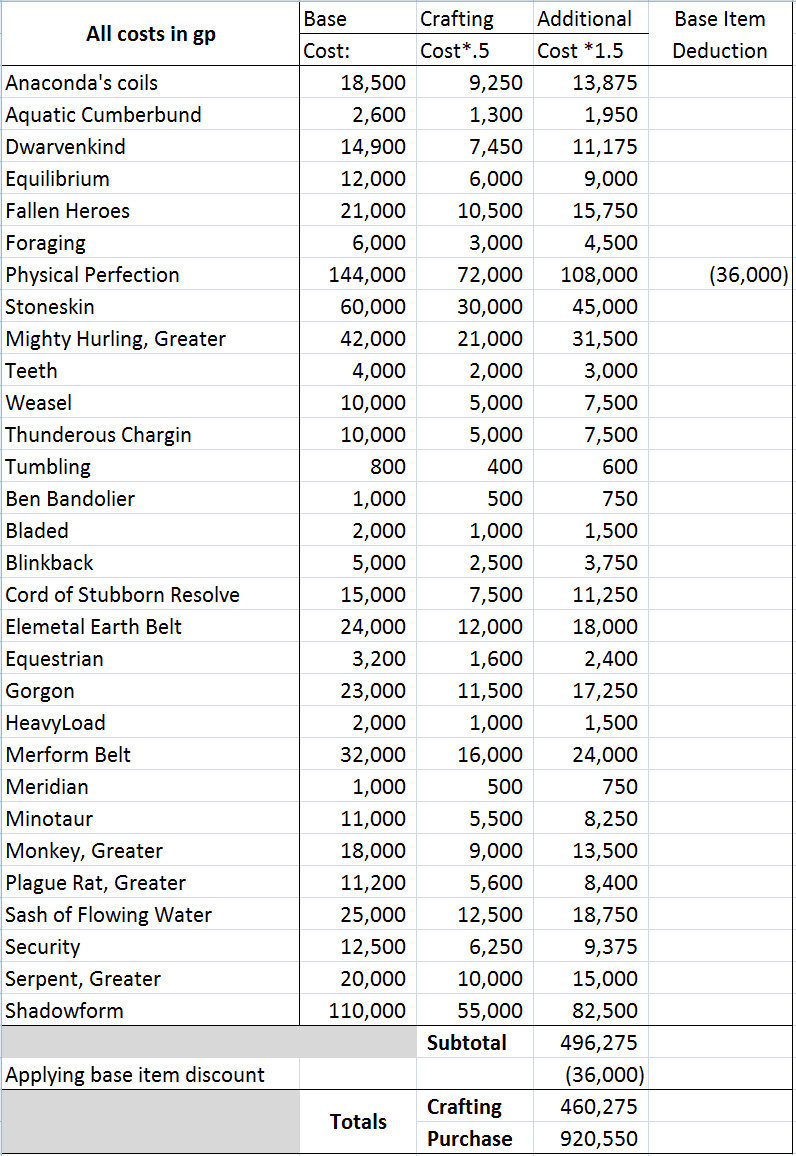 Not the answer you're looking for? Browse other questions tagged pathfinder-1e magic-items .

3
Imbuing an item with Owl's Insight
4
Final Caster level of a crafted magical item with multiple abilities
2
Does Accelerated magic item crafting increase the daily cap?
6
Is adding common item effects to magic items dependent on caster level?
1
Cost of custom crafted item with multiple enhancements spells?
2
What are the rules for upgrading existing magic item?
3
Is this player correct as to how magic item creation works?
0
Magic Item Creation, Use Table 15-29 estimate magic item gold piece values
53
Why is this uncommon magic item better than this rare magic item?
2
What determines whether an item can be considered "epic"?