I've got a robilar knockback dungeoncrasher build and I want to fully understand how does it work.

So, let me get this stright:

Jack the barbarian has a sword on his hand and both feats in the title in addition to combat reflexes. ...and a line of enemies is at each side of him making a kind of hallway. Let's say he intentionally runs through that hallway.

At the start of your action, you can adopt a fighting stance that exposes you to harm but allows you to take advantage of your opponents' exposed defenses as they reach in to attack you. Anyone who strikes at you gains a +4 bonus on attack rolls and damage rolls against you. In return, they provoke attacks of opportunity from you each time they swing. Resolve your attack of opportunity after your foe's attack.

You can make an attack of opportunity against an opponent that hits you in melee. On you action you choose to take a -4 penalty to your Armor Class in exchange for the ability to make an attack of opportunity against any creature that makes a successful melee attack, or melee touch attack against you. The opponent that hits you must be in your threatened area, and this feat does not grant you more attacks of opportunity than you are normally allowed in a round. You specify that you are activating this feat, and the change to Armor Class and your ability to make these special attacks of opportunity last until your next turn

2.- Does succesful tumble check prevent him from makin one or both of the AoO's against each enemy?

3.- Can he intentionally not use a AoO to make it later against anothe enemy in the "hallway"?

4.- Is there a feat that rewards you if you decide not to spend your AoO but neither spends it?

You never have to take an attack of opportunity, either Jack or his opponents.

This chart may help: 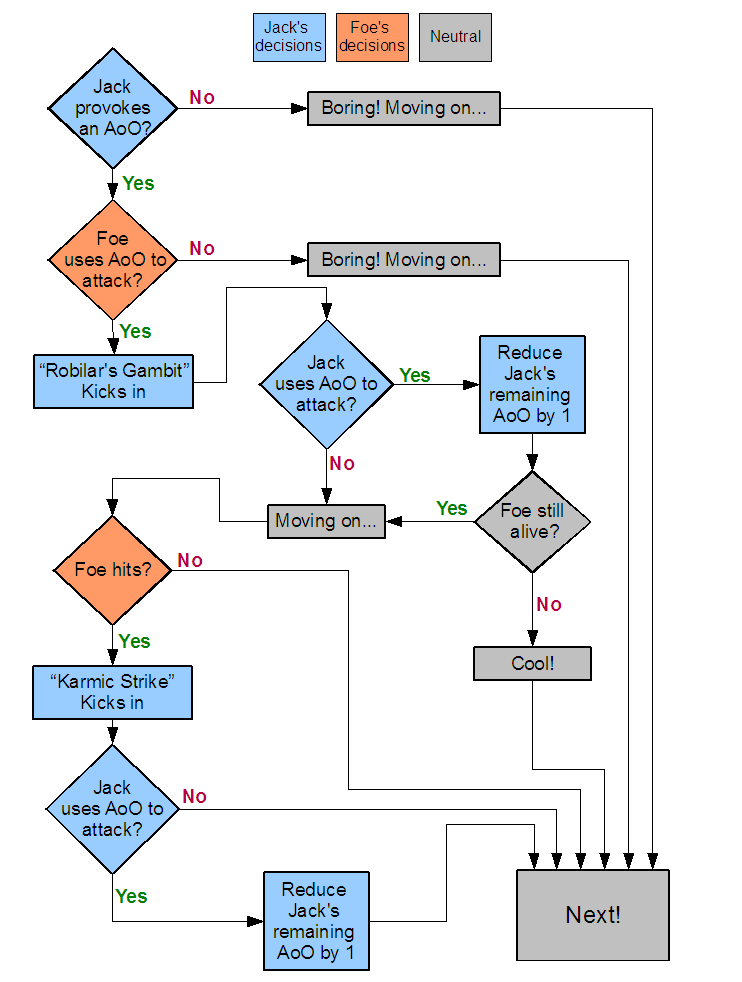 Not the answer you're looking for? Browse other questions tagged dnd-3.5e opportunity-attack .