What is a good gaming system for running a 'con man' game? [closed]

What gaming system would work the best for running a 'con-man' scenario?

I'm thinking of a team of people who run a con on greedy rich landholders or merchants. Most likely in an urban setting. I like the pseudo-medieval feel of Dungeons and Dragons, so something with that kind of environment/worldview would be nice. 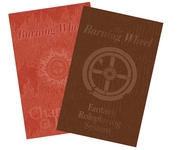 Leverage The Roleplaying Game is specifically designed to do a con or heist, and the system is pretty awesome too. It's easy to get into, has several methods of quick and collaborative character generation, and once you get into play the mechanics are well thought out, streamlined and flexible. The only tweak you'd need to do is to the Hacker, who would end up being a Locks & Traps type of Thief in AD&D terms. Everything else fits as is for a fantasy setting, and the mechanics don't need any alteration.

Try The Dying Earth RPG. That's set in a fantasy world, so it hits that button.

It's based around arguing. That is, it's a game of conning and fast-talking and persuading. The main mechanic is a back-and-forth dice mechanic, in which people fire arguments back and forth, until one of them loses.

Any game with a social combat mechanism should work.

At the light mechanics end, Traveller and WFRP 2nd Ed both have reaction rolls and the ability to change people's reactions via game mechanics use of interpersonal skills. (Traveller, while Sci-Fi, has two adaptations to Fantasy...)

At the heavy end, any of the Fate games can use Diaspora's social combat mechanics.

In between are the Burning Wheel and Mouseguard systems, which have a social combat system.

Several D20 games have social combat systems as well, but I can't recall which ones.

Not the answer you're looking for? Browse other questions tagged game-recommendation fantasy or ask your own question.