How should I restrain myself when both playing a character and DMing?

I'm currently playing an IRL game with two of my friends. As you might imagine, I was worried that they weren't powerful enough to take on the higher level encounters so I made a character to help them out. They were both new to D&D so I didn't want to overload them with a gestalt character. However, now I'm worried that I might use my DM powers to make my character more powerful than the other two.

I just want to know something to help prevent myself from using my magic DM powers for evil.

Right now, we have a sorcerer and monk so I was considering making a tank-ish cleric.

To Join the Chorus of Don't Do DMPCs

So, let me start by joining the others and saying that generally DMPCs are not a good idea. I have seen it work (and will get to how shortly), but generally I recommend avoiding them. As others have said, it is far too easy for the PCs to rely on the DMPC even if you have successfully bordered yourself. It is also hard to resist the temptation to let the DMPC shine, or have him figure things out for the other players.

If the problem is that the group is underpowered, there are better options including lowering the power of the opposition, tailoring the the quests to their strengths, showering them with magic items to make them more powerful than their level would suggest, etc. You could also consider letting them play more than one character each at the same time (though their inexperience might be an issue).

But you asked how to do it

But you didn't ask us if you should, you asked how. And I have seen it done in ways I would consider successful. The key thing is to make sure the real PCs are firmly in charge and that the DMPC rarely if ever outshines them.

To do this, consider the following options. You don't need to use all of them.

I would be very careful with the introduction of a DMPC.

If you do decide to do so, make a character in a supporting role. If you have a pair of fighter PCs, roll up, say, a persist buff cleric or a bard to heal and support them—but don't kill things for them. Don't build a character to beat the monsters for them, build a character that makes the players stronger.

Alternatively, consider one of the following options:

Buff the Players: If your encounters tend to heavily outnumber the PCs, I would actually consider giving the PCs extra actions. This gives them more agency and damage without requiring them to learn more mechanics. If they would tend to get taken out quickly through HP damage, give them more HP or reduce enemy attack rolls. You might accomplish these through magic items, or you might just implement them as purely mechanical changes.

Leadership: While this can be hard to deal with for some, it's good for upping PC power. I recommend not statting the followers up as PCs, but instead as Warriors, Adepts and Experts to simplify building them. These might be redshirts, or they might be a loyal, competent band of followers that aid your PCs.

Tone Down the Encounters: If you don't want to increase their power, make your encounters less challenging. If they want to fight the high level monsters, you might try toning them down mechanically while still calling them the same thing. If your players are as inexperienced as they seem, they won't notice the difference.

Don't add an NPC in, especially one with higher capabilities than the players.

Instead of providing higher level encounters, lower the encounter difficulty and the scope of the game and let their capability and system mastery grow naturally.

At best, you'll have him treated like a bazooka: 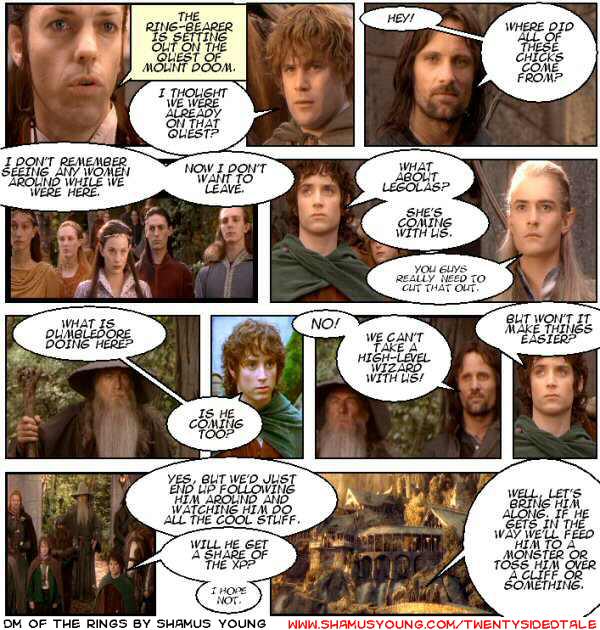 And at worst, it's "let's tag along and watch the wizard do everything."

It's perfectly fine to DM and play, just make them a support character and don't min max.

Human, full cleric levels, no divine meta magic, tithe 30% of your money to the church, and spend the rest on metamagic rods to help you heal or just protective items.

Skills should be knowledge that the party lacks.

Do not take diplomacy, sense motive etc, and do not have high charisma. Without using DMM, a cleric doesn't want charisma anyway. The last thing players want to see is the DM talking to themselves.

There will be a lot of suggestions on 'the role the DMPC should play' and how to keep him from overwhelming the players.

Game agnostic, here's the answer for my part:

First: Make sure the focus for you AND for the players is on creating a story together. If the players view it as 'overcoming a challenge' on their own, then your GMPC will always and forever be a game-breaker, no matter what you do.

For instance, I once had a bard that followed the party around. "Inspire Courage", cure spells, and the occasional bardic knowledge exposition. Wasn't even a DMPC, per se - it was supposed to be a holding place for a fourth player that was constantly unable to show up. The players HATED her, because they felt like it meant they couldn't do it themselves.

Which leads to the second: Talk to your players about it.

A DMPC is nothing but a full-time NPC. As with any other friendly NPC, the goal is to give the PCs information and assistance. That said, don't make things too easy for your players, don't lead them to depend on the NPC, and don't let the NPC come between you and your players.

Consider using multiple NPCs for the same purpose. The first one might wander off on "personal business" and show up again as needed. If/when the mission changes, introduce a more appropriate NPC. Let the PCs take on henchmen. Put the focus on the adventure, where it belongs.

Not the answer you're looking for? Browse other questions tagged dnd-3.5e gmpc .

6
How to GM and Play a Character fairly
67
Can the dungeon master have a player character?
53
How can I use powerful NPCs without overshadowing the player characters?
33
Does having a recurring NPC ally incur the same risks as having a GMPC?
11
Is two-person D&D feasible for any edition?
21
My GM has created a Mary Sue NPC. What can I do to persuade the GM to make her less powerful?
16
How can I play as a DM, and still have a character who keeps up in levels and can influence the story?
5
Is this wolf DMPC overpowered or underpowered?
7
If my team-mate absorbs a creature we have been fighting, will the rest of the party still gain EXP?
0
Is it reasonable to have an extremely overpowered GMPC accompany the party early on to let them with enemies that they can't overcome on their own?
See more linked questions

14
Balancing a monk variant with full base attack bonus
28
How should I handle a ruling that really hurts my character?
16
How do I protect myself from harm and wrack?
4
How can I run a game for a group of 3 players that doesn't include a healer?
2
How can I improve the AC of my goliath warblade?
8
What are good options for a frontline melee with very limited source material?