Does a reach weapon allow you to threaten squares 10 feet away or not?

There is some confusion because PHB p.147 says that a reach weapon adds 5 feet to your reach when you attack with it, which can be interpreted to mean that, if an enemy is 10 feet away on his turn, he isn't actually in your reach (since you aren't attacking with the weapon yet) so you don't get an Opportunity Attack. Is this interpretation correct and you only threaten 5' away, or does a reach weapon always increase your reach for the purpose of threatening distance?

Reach (p. 147). This property also determines your reach for opportunity attacks with a reach weapon.

Most creatures have a 5-foot reach and can thus attack targets within 5 feet of them when making a melee attack. Certain creatures (typically those larger than Medium) have melee attacks with a greater reach than 5 feet, as noted in their descriptions. - PHB, p. 195.

Searching through all the creatures in the PHB at no point was Reach 10 ever specified, nor a feature having anything to do with reach. This might be something featured in the DMG or the MM though.

Firstly, there is no concept of "threatening" in D&D 5e; you can make opportunity attacks when a hostile creature moves out of your reach.

As for reach weapons, the errata for the PHB clears this issue up once and for all:

This property also determines your reach for opportunity attacks with a reach weapon.

So yes, a reach weapon allows you to make opportunity attacks when a creature 10 feet from you moves away from you.

You can make an opportunity attack when a hostile creature that you can see moves out of your reach.

This seems pretty clear to me. A creature using a reach weapon has a larger reach than normal for the purposes of weapon attacks, which an opportunity attack with a weapon is. Do recall that you can attack adjacent foes with reach weapons in 5e, so characters with reach weapons no longer get a free attack when a foe moves adjacent to them, since they haven't "left their reach".

The emphasized portion of the above paragraph is a reminder that their barehanded reach isn't any longer than normal, since the grapple rules state they work on someone "within your reach" but go on to clarify "using a free hand", so no one can say my interpretation allows ranged grapples.

The Following is an analysis based on a strict reading of the rules, and ignoring designer intent and their use of language. The lead designer for 5e, Jeremy Crawford, had this to say about Reach weapons:

@JeremyECrawford I notice people have different interpretation, does polearm increase reach always or only when attacking with it?

@Plaguescarred The reach property applies only when you attack with a weapon. Any use beyond that is up to the DM.

Rules for Opportunity attacks and Reach weapons don't make (narrative?) sense, but they are consistent. Reach is always 5 feet when not actively making an attack, and not the weapon being used.

To understand how/why this is the case, we must first work with the assumption that it's possible and logical that a person with a 10 foot reach weapon when they attack, is going to have a reach of 10 feet for the purpose of opportunity attacks.

However, when using reach weapons, this seemingly falls apart, no matter which way you interpret the rules. 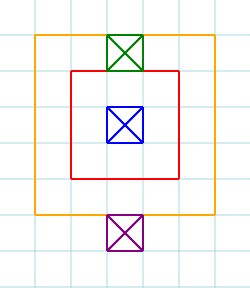 Scenario 1: Reach for opportunity attacks is 5 feet.
In this scenario, you have just finished attacking the green monster. It is now the monster's turn. You engaged them in melee combat, but he can now step away from you and go off and do something else without any penalty. Purpose 1 of opportunity attacks has been subverted. It's arguable that this isn't really the purpose of opportunity attacks, but I think it's the basic assumption for most people, and it's consistent with the rules for 5 foot reach weapons.

That is the situation with your run of the mill opportunity attack. But now let's include the polearm master feat. (Page 168 of the Players Handbook)

Polearm Master
You can keep your enemies at bay with reach weapons. You gain the following benefits:
• When you take the Attack action and attack with only a glaive, halberd, or quarterstaff, you can use a bonus action to make a melee attack with the opposite end of the weapon. The weapon's damage die for this attack is a d4, and the attack deals bludgeoning damage.
• While you are wielding a glaive, halberd, pike, or quarterstaff, other creatures provoke an opportunity attack from you when they enter your reach.

And now looks more closely at the wording of the opportunity attack rule.

Page 195 of the Players handbook
The attack interrupts the provoking creature’s movement, occurring right before the creature leaves your reach.

If we edit the rule with polearm master in mind it would read as follows:

The attack interrupts the provoking creature’s movement, occurring right before the creature leaves or enters your reach.

The alternative is assuming that the rules are wrong and lots of errata is needed all over the place to "fix it".

Most creatures have a 5-foot reach and can thus attack targets within 5 feet of them wh en making a melee attack. Certain creatures (typically those larger than Medium ) have melee attacks with a greater reach than 5 feet, as noted in their descriptions.

Of course, if your table decides to play things out differently, you may do so, but be consistent if you do.

All that being said, in the end, the intention of the rules is that an Opportunity Attack is an attack and so the reach property applies to the conditions that allow you to attack as well. As can be seen from this conversation on Twitter:

@JeremyECrawford Why distance discrepency OA provoke base on weapon? You said earlier reach weapon dont increase if not attacking? #Confuse

@Plaguescarred Yes, OA (an attack) is based on your reach with the weapon you're using.

For creatures, you will see that different attacks have different reaches, and so an Ancient Red Dragon for example will have one reach domain for it's claws and another for it's bite, giving it a greater "threat area".

@maplealmond none - only if you move away, dragon picks which one to use. claws make most sense.

The question seems to be,

1: Can I opportunity attack things when they go from 10 to 15 feet?

And the answer is yes. The errata say so.

"This property also determines your reach for opportunity attacks with a reach weapon."

2: Can I still make an attack when something goes from 5 feet to 10 feet?

The general consensus is no. Because your reach is now 10 feet, and opportunity attacks only trigger,

"... when a Hostile creature that you can see moves out of your reach."

Open and shut, right? No, and I'm about to grognard so hard.

You have more than one reach.

"Instead of using a weapon to make a melee weapon Attack, you can use an Unarmed Strike: a punch, kick, head--butt, or similar forceful blow."

Your unarmed strikes are not reach weapons, and you don't need a free hand to have the option.

Opportunity attacks can be made by any melee weapon attack.

"To make the opportunity Attack, you use your Reaction to make one melee Attack against the provoking creature."

I guess the new question, sense I craked this open, is, if you're a polearm master, do they provoke going from 10 to 5 feet?

"While wielding a glaive, halberd, pike, or quarterstaff, other creatures provoke an opportunity attack from you when they enter your reach."

I am wielding a polearm. They did enter my reach. As a DM, I'd say no, though I have no real leg to stand on, other than feel.

It's pretty simple at my table.

Scenario: You have a reach weapon and it's your opponent's turn. At what point do you get the Opportunity Attack?

Answer: When the opponent leaves your threatened area.

Problem: You threaten at two levels, 5' away (1 square) and 10' away (2 squares). So, we count both levels separately, but we don't count going further into your reach as provoking. Thankfully you only have one reaction.

Example 1: If an enemy enters your 10' reach and stays 10' away from you, then when they leave your 10' reach by walking away without using disengage, it provokes an opportunity attack.

Example 2: If an enemy enters your 10' reach, and then enters your 5' reach, they don't provoke an opportunity attack as they are going further into the battle.

Example 3: If an enemy has entered your 5' reach and then leave to your 10' they provoke an opportunity attack.

I houseruled that this is actually your reach rather than 5' it adds a huge protective element to using a polearm that I think is generally lacking.

Many RAW (rules as written) seem to weaken reach weapons. They already deal less damage than most 2-handed weapons. They're heavy so cause disadvantage for small characters. You can't use a shield with them unless you're mounted with a lance. So, most abilities that say 5' I changed to within your reach as a house rule. Honestly, it almost never comes up in my games, but it's something I want.

I rule personally that if a creature moves from inside your square to outside moving through your space as difficult terrain that you provoke an OA, on this basis and other evidence i rule that 10' to 5' is also leaving a reach and entering another so it also trigger an AO. but moving without changing reaches

So lets look at a polearm. Perhaps it's the same. I know I can attack at 5 feet with halberd. But I also have reach of 5 (threatening 10). So if you leave my area...EITHER at 10 feet or at 5 feet, I should get an opportunity attack. You only get one reaction (right?) so it doesn't matter if you go through both distances in one move (still just one OA).

Untitled image by GMNoob is licensed under CC BY-SA 3.0

Not the answer you're looking for? Browse other questions tagged dnd-5e weapons opportunity-attack reach .

51
When are Opportunity Attacks provoked while holding a reach and a non-reach weapon?
11
War Caster, a whip and a dagger, and provoking Opportunity Attacks
11
Which is likely to provide more chances to opportunity attack, Polearm Master or Sentinel (with War Caster)?
5
Is a creature's reach linked to the reach of its attacks?
5
Does reach apply to non-attack triggers?
5
Help me optimize a controller-warlock that doesn't just spam Eldritch Blast
6
Do you get an Opportunity Attack with an unarmed strike at 5ft. when holding a 2-handed reach weapon?
4
How do opportunity attacks work when wielding weapons with different reach?