How do I make it absolutely clear that I'm shooting you in the face?

I play live action roleplaying games (LARPs), where myself and the players around me adopt actual physical characters.

I've had a problem in the past where I hold a gun and want to shoot someone, but don't have their attention. Probably trying to shoot them in the back or something. If I shoot them, they have very little way of knowing and don't really have time to reasonably respond. This breaks game immersion, and is a serious problem.

This problem isn't restricted to guns. If I want to punch, shoot, kick, perform spiritual magicks on, slap, or otherwise nonvocally interact with someone when their back is turned, they might not (read: probably won't) get the signal.

Short of shouting at them "Hey, snotface!" to get their attention before shooting them, how can I let them know so they can respond appropriately?

In order to be a successful solution, the signal must:

This works great if I have their attention and brief eye contact - just point, shoot, and say "bang." But what if you're not paying attention? How do you know that I've shot you?

You could also consider Nerf guns. They won't require eye protection like paintball and airsoft guns do. Projectiles are cheap and guns seem to be in a similar or lower price range compared to a latex sword. 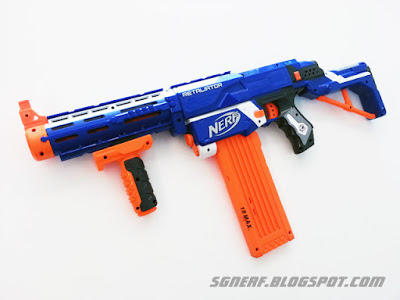 With some creativity and a splash of paint their bright colour schemes don't need to break immersion (although I would advise against "open-carrying" real-looking toy guns): 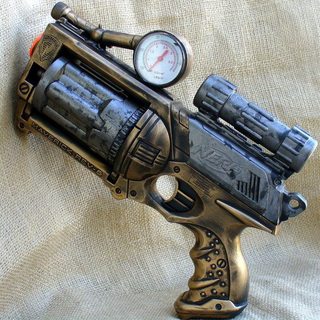 The only drawbacks are limited range (especially outside, in windy conditions) and the need to collect your projectiles after firing them (although you could try making your own biodegradable nerf darts).

You have contradictory requirements

I feel that there is nothing that fits the whole list that you are proposing - many larp groups have tried, and in the end you must choose to go either with the simulation way, keeping in character; or with the roleplaying way where game mechanics involve obvious out of character actions.

One option to deliver a shot is by delivering an actual hit. The problem is that all the reliable ways of doing so seem to be out of your budget - it's airsoft, paintball or lasertag with the laser detectors. Airsofters and others have long tried to make it as cheap as possible, and it doesn't go any lower than it is. In addition, involving airsoft or paintball (even for a single or few characters) generally would require that 100% of players and GMs wear eye protection at all times as part of their costume, which has to be included as part of the LARP setting to keep the atmosphere suitable.

If you don't actually get hit by a shot, well, then you won't get your criteria of not breaking atmosphere and having the target react as intended. There are gameplay mechanisms to do so, however the more effective they are (as in, telegraph successfully; allow for features such as sneaking or target selection) the more obviously fake they will be.

For example, the old approach of simulating ranged wizard spells by throwing soft objects would also work for such shots. Put a hand catapult on a pistol-like handle - something like http://www.bladesandbows.co.uk/vitesse-catapult-200-p.asp or homemade equivalent.

For sneaky long range effects, involve a GM that can "invisibly" walk to the target and explain that they have been hit by a sniper from unknown direction. Or the great suggestion of using mobile phones to deliver targets info - it's clearly OOC, but it's functional.

Clearly OOC mechanics are probably okay - LARPs can work if there's a very clear distinction between the IC and OOC actions, it's better than if OOC actions look almost like IC and you can confuse if some event has or hasn't a game mechanic effect.

In the end, you'll have to choose, it's generally a tradeoff between proper atmosphere and theatrics versus cheap&functional gameplay mechanics.

Collude With Your Target

Before the scene begins, inform your target that you're going to shoot them at some subtle cue. If there's a competitive aspect to your game, you need to trust your target not to metagame and avoid it.

You lose your target's OOC surprise, but everyone else will be caught off guard and probably rather unsettled by the sudden noise (yelling "bang!" or "gunshot!") and having the target just topple.

There is literally only one things that fulfills all of your criteria - and that is, good stage presence.

Being able to single a person out of a group with body language, being able to take an imitated action with a stage prop and run with it, these and other things in your list are improvisational acting skills.

You want to be talking to an actor about this, not roleplayers. They have already found the limits of this sort of interaction by extensive, skilled repetition and innovation - you are trying to reinvent a wheel that is rubberized, air pressured, and rolling down roads all around you at this moment.

What you need is not a magical prop, but rather players able to read and put forth cues like 'I am shooting you' 'I am being shot' in a relatively skilled manner - ergo, run classes. It's usually not hard to find someone with serious improv experience in a larp group - a few quick lessons in how to accept cues will not only improve the 'shooting' situation but also the play experience in general.

If someone gets suddenly sniped by a hidden sniper, that's not something you can solve with improv acting - or a prop. That sort of thing should be handled by a GM handing the player a note, a text message on a mobile device, or a cue card waved at them from 'out of scene'. You can probably create more byzantine methods like trying to hit someone with a nerf sniper rifle or something but, none of that sounds likely to work.

The Argument Against Interactive Props

At no point will a prop that can simulate some of the effects of a gun firing (pop gun, airsoft gun, laser pointer, nerf gun) not break versimilitude without still leaving significant amounts of mystery as to what is going on. Actions like 'killing someone with a pistol' or 'paralyzing someone with a spell' are or should be rare enough in a larp environment that automatic associations between laser pointer = I just got shot will not happen, and the reflexive moment of 'hey is jim pointing a laser at me' and looking down at chest to see who he's pointing at etc will interrupt roleplaying in a significant manner.

Airsoft weapons also will drop into the uncanny valley of versimilitude - too similar to real thing to be taken as an iconic representation, and not similar enough to 'seem real'. Nerf guns are designed to look as non-gun-like as possible, even painted. Plus, both of these options have the problem of accidental injury. And missing, unless you are playing a boffer larp, will leave people thinking you just intentionally shot Bob when you meant to hit Jim.

To my knowledge, including the suggestions in the answers to this question, there is no good prop option that does this for you. It's a skill, that you have to learn and apply. That is the sole good option until we start rolling out AR goggles for roleplaying.

Having an associate pop an inflated paper bag, or firing a cap gun, while you brandish a 'weapon' at the person you are 'killing' is a good audial cue. As is shouting 'hey, you!' and then shouting 'bang!'. You'd think this sort of thing breaks versimilitude - in my experience it does not. In the context of a roleplay, a story, your brain accepts onomatopoeic sound effects far more readily than unfamiliar objects like nerf guns as constituting 'a gun'.

Again, also, player awareness of others 'entering the scene', maintaining 'scene space', and 'walking for attention' etc these are all improv techniques used to create a story out of nothing that you can very easily repurpose to a larp environment.

When I was playing a game we called "SWAT" We used toy guns with laser pointers taped to the side of them, It almost always required two hands to be on the weapon (Even a simple pistol) and the results were almost instant without the hassle of being out of character or doing much other then shining the light past their head into their field of view. and even at distances of more then 100 feet we were scoring kills on each other

However this is an extremely honour based system and often times a cheater wouldn't "Call their shots" so you really have to be in the game to appreciate getting into fire-fights without the use of Airsoft, Paintball, Or even nerf and would often cost us less then 5 bucks to make a pistol or other simplistic firearm (2 bucks for a toy gun and another 2 bucks for a laser pointer from a pet or dollar store)

It seems you have already thought about paintball guns. If you are looking for a cheaper alternative I would recommend an airsoft gun. 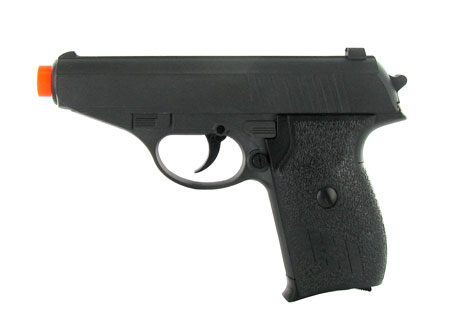 Whilst doing a quick browse I found them under 10 bucks, if you search really hard you can probably end up somewhere in your budget range.

I especially like that once you have the gun, the bullets come really cheap so it is quite reusable.

If you are really worried about safety you could use protective glasses, but telling people not to aim for the head should go a long way.

I moved from Fantasy LARP back in the 1990s to Lazer Tag and have never looked back. It's cheap, reliable and safe (as long as you don't try to use laser pointers!!). Generally used for Modern or Sci Fi scenarios it has the big advantage that you can try almost any genre you like that involved using a gun. I have played and Run everything from Aliens to Dr Who (frankly the list of 'games we have played' is quite long).

11
LARP: Group psychology in antagonistic player groups
43
How do I convince players that I'm not necessarily a murderous cretin?
5
How to handle the party that doesn't trust you?
38
How do I get my players' LARP characters to not be a bunch of murderous cretins?
15
How can I pick my players’ brains for what they’d like to play?
57
How can I tell the DM that I wasn't having fun and that I fault him for it?
11
How can I, as DM, deal with an attention-grabbing player, and a group who can't speak up?
10
How to signal to my players that the following part is supposed to be played on fast forward?
23
How to get real-looking rust that will be safe to the touch?