How can I recognise when a Scene should be skipped?

There is a mode of thought that says RPGs should be like a movie or a TV show. We don't give screen time to the boring stuff.

I had a scene play out where the players had to let a NPC know they were about to do a thing for his benefit. So that afterwards he would give them credit.

This was great. It was just like in the movies where they want to show that the party met the guy before, but noone actually cares what was said. They can fill in the blanks.

This was great. Because of this the pacing was much better for the session, and I left feeling please with the story.

How can I spot scenes that I should cut? I would like a kinda checklist that i can periodically run through to decide if it is time to cut to the next scene.

Here's a little tidbit that Microscope taught me: every scene has a particular question (or questions) associated with it. When that question is answered, the scene is over.

This is why nobody runs games with scenes in which the players are just sleeping: there's no interesting question being answered. I can safely say that no player wants to play a game in which they uneventfully watch their character sleep. Even if something does happen in the middle of the night, the game will jump directly to that, rather than dawdle over how long the players slept.

The question "How did we make friends with this NPC?" isn't really interesting if you already know the answer is just "small talk." It takes a rare kind of player to be interested in that question, so most of the time, it's safe to skip. The questions "Where did we learn about the ultimate result, and how did we respond to it?" are interesting questions (to your group), and deserve playing out as a scene.

In other words, your ultimate goal as a GM is to find scenes that develop parts of the plot that intrigue the players. If your players all happen to be the rare kind that enjoy playing out small talk conversations, then as a GM, it's your responsibility to give them that to develop an enjoyable game. But, if you judge that they wouldn't enjoy such a scene, it's equally your responsibility to skip over it and jump to something more interesting.

So, here's my process, and it's really quite simple for the most part:

What if there isn't an explicit question I can think of?

I can guarantee every scene has a goal in mind. Even if it's just players attacking the entrance to a cave, the question is "How did we gain access to the cave?" - and this question should be played if the players want it.

That being said, if you really can't think of a good question (or set of questions) that represents what the PCs are doing, then there's an abstraction to this process, which is simply, will the players enjoy this scene? Note that this doesn't exactly help you determine what useful information comes out of the scene, but it still works as an abstraction in most cases.

Does this mean I literally have to stop the scene once the question is answered?

While in Microscope, this does indeed literally means we stop playing the scene, this approach doesn't work in every game. It's fully possible - and encouraged, for continuity - for you to move from one question to the next in the same scene.

For instance, imagine a scene between players and the king. The players start out with the question "Why did the King of Wisconsia summon us here?" - and let's say the king is a straightforward person, so immediately tells them the answer: "To destroy the goblin hordes." This doesn't mean the scene is over, but instead, means the players have another question: "How does the King expect us to defeat the goblin hordes?"

You end the scene when the players have no more questions of interest to answer, and at that point, move onto the next scene.

I don't believe that there are some hard and fast rules about this. It's too much dependent on the situation, the context and the state of the players. But there are some ways that you can use in order to be better at spotting those "dead-meat" scenes.

Know the genre you're working with

No matter what game you are playing, it will fall to a certain genre. Maybe it is a fantasy game, or a horror one, or a slice-of-life kinda story, but the game will surely fall to at least one of the genres. That's great, because you can use that.

Ask yourself some questions

Your chosen genre is only one of those things you should consider. I usually add a few quick questions:

On SAS (Storytelling Adventure System) format of World of Darkness (and other games) adventures scenes are structured with the following fields:

Storyteller goals are what the Storyteller (or adventure writer) intend to achieve with the scene. Can be the presentation of a character, the introduction of a theme, story advancement,..

Player goals are what the characters can get from the scene. It can be information, a contact, change the relationship with a NPC, make a NPC do something, making a tough decision, pick sides,...

I have thought of using this format on my own stories, but I have dropped the idea because my stories are not so static, so I add/modify the scenes too much depending on the player characters actions, and the NPC reactions to the player character actions. 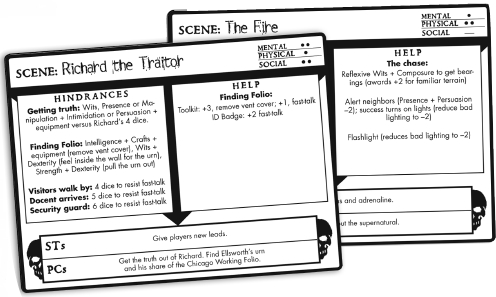 Not the answer you're looking for? Browse other questions tagged gm-techniques story pacing .

23
How does wandering within a city work?
9
Can a scene pass without any dice rolls?

6
How do you handle skill use and spends in GUMSHOE?
47
How to get out of a story deadlock
24
How to handle diverging expectations on "background density"?
16
How to improve my fast-paced scene
8
When players have settled into "routines" for runs, how to break them out of the rut?
17
How often should the players roll Bluff when interacting with NPCs
10
How can I prepare the map for a combat without alerting the players that combat is about to begin?
30
My players want a tighter narrative, but have wandered off course. What now?
27
Curing NPC phobia
7
Reintroducing a character to a campaign after a leave of absence