When using a grid for combat, do corners grant cover?

We are using a grid for combat. In the diagram below, the grey areas are walls.

If A attacked B, would B have any cover from A? 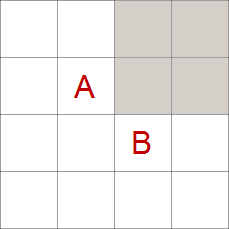 B gets no benefit from cover in this case

DMG p. 251 explains the rules for determining whether a creature has cover from an attack when using a grid, under the "Cover" heading:

On hexes, use the same procedure as a grid, drawing lines between the corners of the hexagons. The target has half cover if up to three lines are blocked by an obstacle, and three-quarters cover if four or more lines are blocked but the attack can still reach the target.

DMG p. 250 also has a picture demonstrating how this works on a square grid (along with an example for the optional flanking rule):

DMG p. 251 has a corresponding image example for a hex grid.

Given the above guidelines, and assuming the wall corner does not jut out into any adjacent squares at all, A would be able to attack B without B getting any cover from the wall.

The bottom-right corner of A is touching B's space, so a "line" could be drawn from that corner to all 4 corners of B's space; none of the lines are blocked by an obstruction, so B gets no benefit from cover for the attack. (The bottom-left corner of A could equally serve as a point of origin for the lines to the four corners of B, which would still be unobstructed by cover.)

(As always, a DM could feasibly house-rule otherwise - if, for instance, the wall corner doesn't perfectly align to the grid and/or there is an obstruction blocking a direct "line" between the two.)

On a related note, the basic rules do include the following guideline for movement when playing on a grid:

Corners. Diagonal movement can’t cross the corner of a wall, large tree, or other terrain feature that fills its space.

This is entirely up to the DM.

The examples given for half and 3/4 cover lead me to believe that his would probably be half cover, if it provides any cover at all (it wouldn't have in 4th). However, there are no real rules regarding what constitutes half/three fourths cover, so this is left entirely up to DM discretion at this point.

The way I would rule this is that no it does not provide any cover (I plan to import 4e's grid combat rules wholesale, so this would not constitute any cover). However, if the corner between A/B jutted out into either of those squares, suddenly it becomes half cover (2 lines blocked). The way I plan to rule cover is: 1 or 2 lines blocked is half cover, 3 lines blocked 3/4 cover, 4 lines blocked, total cover and you can hide.

Not the answer you're looking for? Browse other questions tagged dnd-5e attack cover or ask your own question.

11
Does cover also grant concealment?
1
Using Total Cover after ranged attack to guarantee stealth check
3
Using a mount as cover and attacking
2
Does using a tree trunk for Cover work no matter what direction of the attack on Battle Maps?
10
Is hiding different when invisible than when behind total cover?
6
Combat using a grid and touch spells
8
Does a target have total cover from a ranged attacker positioned on an opposite corner of a hallway?
5
When playing on a grid, how many Medium creatures fit inside the area of a Scroll of Protection's barrier during combat?
19
Does cover affect melee attacks?