Can the Dark Eldar Be be aligned with Chaos? 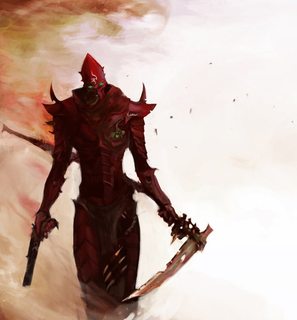 By my understanding, they hate Chaos just as much as any other Imperial fella, right? What's the usual procedure(?) when it comes to aligning with Chaos?

The Dark Eldar are the living embodiments of all that is wanton and cruel in the Eldar character. Highly intelligent and devious to the point of obsession, these piratical people revel in the physical and emotional pain of others, for feeding upon the psychic residue of suffering is the only way they can stave off the slow consumption by the Chaos God Slaanesh of their own souls. Source

Their cruelty is a way to AVOID chaos - since they have no spirit stones, that would protect their soul they instead sacrifice souls of others. It is a bit paradoxical: they do chaos work while despising it at the same time; they do what Slaanesh cultist do but at the same time they despise them and hate the She Who Thirsts for destroying their ancient empire. If you'd prefer to use Warhammer Fantasy RP alignment system, they are EVIL contrary to CHAOTIC cultists.

This region of damaged tunnels is centred across the Warp Storm known as the Screaming Vortex. The Vortex is home to teeming hordes of daemon-worshippers and mutants, living and dying at the whims of warlords and sorcerers intent on murder and subjugation in the name of their dark gods. While this a ready source of slaves and victims for the raids of the region's Kabals, it is a realm largely inhospitable to the Dark Eldar, so strong is the presence of She Who Thirsts within the storm

It means that mere presence of chaos weakens the Dark Eldars.

The dark eldar are a race that consists of individuals and organizations just like any other race (probably except Necrons and the hive mind) in the galaxy. That means they will never willingly align with Chaos.

However, Chaos does not ask nicely. The forces of Chaos will lure those that seek more power than their race's hierarchy would let them have. It will not stop to make those individuals or organisations it has subverted more and more powerful until the whole structure is weakened and can be brougth down from the inside.

So it's highly unlikely that this picture shows a dark eldar who allied with chaos. It's absolutely within canon though, to assume that a dark eldar was corrupted by the power and promises of a chaos god and in the end could not hold his own in the power play of bargains with Chaos and succumbed to the god that tricked him into it. He'd not be the first and surely not the last.

Not the answer you're looking for? Browse other questions tagged warhammer-40k or ask your own question.

15
How can I balance the darkness of Dark Heresy with my humor without getting too goofy?
10
Psykers in Dark Heresy
4
Lasgun options in Dark Heresy
3
Does the latest print edition of Dark Heresy contain errata?
19
Can a Space Marine or Chaos Space Marine take off his armour?
5
How long do Dark Eldar live for?
2
Can Dark Eldar hide their signatures?
1
What causes intoxication for Dark Eldar?
1
Mechadendrites in dark heresy: sourcebooks and guidelines
3
What was the initial relationship between the Emperor & the Chaos Gods?