What is a slam attack?

Any number of monsters in D&D 5e (and previous editions, but 5e is my concern) have attacks labeled Slam. What, descriptively, does an attack of this kind entail?

For example, doppelgangers have a Slam attack. Does this mean the doppelganger bodyslams the character, rugby style?

I would be happy to have an answer based on a reference from a previous edition.

Since previous edition references are OK, this is what the 3.5e Monster Manual has to say (page 312, under natural attacks):

Slap or Slam: The creature batters opponents with an appendage, dealing bludgeoning damage.

Picture a zombie attacking, it's not going to punch you. It's going to slowly and methodically hit you with it's arms, or headbutt.

With something that moves a bit quicker, like a doppleganger, this is representative of the fact that it can attack in numerous different humanoid forms. So it's likely to be a headbutt or an appendage attack. Rugby might be a good thought, an American Football tackle might be another solid example.

Basically, when you are thinking about describing these attacks in your game, think about the ways in which an unarmed combatant of the type you are dealing with might hit someone. A zombie's slam should be described much differently than a doppleganger's even though they are the same attack.

Basically a Slam or Slap description is given to a creature's attack to establish that the damage type it deals with it's natural weapon is blunt damage, the same way a horn is described as Gore since any attack made with it would inherently be piercing damage. This in no way determines how the monster actually performs the attack or what it looks like to perform it, so that aspect is completely up to the DM.

Though I'm pretty sure it's not described in official rules, slam could probably be any kind of unarmed bludgeoning attack. Personally, I think of it as a two-handed, close-fisted bash with the arms brought from above the attacker's own head, forcefully down onto its enemy's body. Like swinging an axe down to chop wood, but without an axe.

Ultimately I'd say it would come down to DM fiat/fluff.

If you look up the definition of slam you get "shut (a door, window, or lid) forcefully and loudly". Though it can be a very generalised term.

It could be a full body slam as you suggest i.e "the zombie sort of trips and slams into you, dealing X damage" or some form of graceful, acrobatic attempt, it could be an "amateur trying to break through a door" shoulder slam, it could be an unarmed, two-handed, closed-fist bash as @Key suggests or a kick for that matter, if the monster is actually holding a weapon they could slam the pummel into you, they could just pick up a rock and slam that into the side of your head.

It really kind of depends on the situation, the monster and how the DM wants to describe it.

When I read about a slam attack, I picture something akin to the following picture: 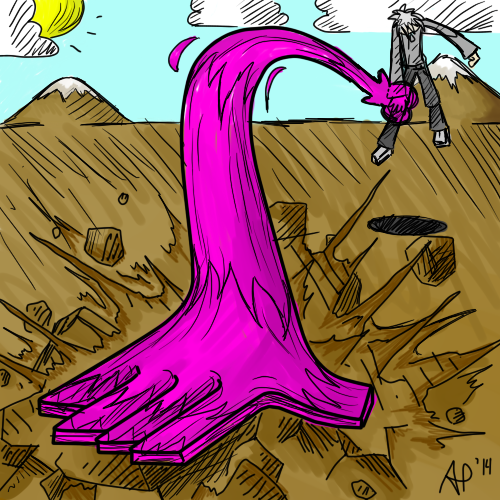 It could be one hand, or two hands, but it's basically a top down motion, not necessarily a "body slam", but just a regular, "slam".

Not the answer you're looking for? Browse other questions tagged dnd-5e attack .

2
Do creatures with multiple arms (4+) get to make a standard attack with each pair?
8
Does a Rogue's Blindsense let them fully perceive an obscured creature?
10
How does a gelatinous cube's special ability engulf work?
12
How big is a gemstone in the DMG gemstone table?
23
How do I calculate the volume of a given quantity of coins?
1
Two-Weapon Fighting Mechanic Alterations
16
How to encourage melee combat when ranged is a stronger option