Eldritch Blast with multiple beams and Agonizing Blast on a single target: Cha Mod just once?

I'm leaning towards "yes" on both because each beam involves a separate attack roll, unlike MM. So, in that sense, it's more like a Warrior's multi-attack than a spell.

Each beam is a separate attack in this case. So

You're exactly right on the comparison, this is a multi-attack spell, rather than multiple damage units like Magic Missile. 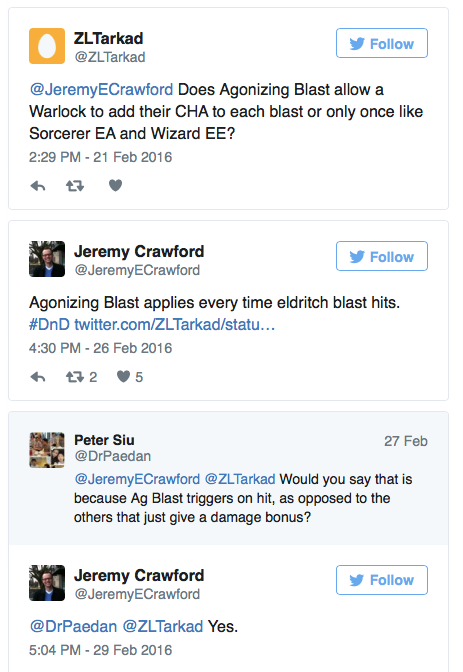 When you cast eldritch blast, add your Charisma modifier to the damage it deals on a hit. -- Player's Handbook, page 110

Not the answer you're looking for? Browse other questions tagged spells dnd-5e warlock .

12
When casting Eldritch Blast with the Agonizing Blast eldritch invocation, what do I add to my damage roll?
15
Can you Eldritch Blast as a Readied action even though it's multiple attacks?
9
How does the Potent Cantrip-Sidekick Feature work with multiple Eldritch Blast-beams?

15
Can you Eldritch Blast as a Readied action even though it's multiple attacks?
6
Clarification on the Phoenix Bloodline Sorcerer's Mantle of Flame Ability
8
Using Empowered Spell Metamagic with Eldritch Blast
12
Do you roll an extra damage die for Hex if you crit with one beam of Eldritch Blast?
14
Can I target multiple creatures with a readied spell that can target multiple creatures?
10
What is the most damage one can do with a cantrip in one turn?
11
Does the Slow spell limit the number of Eldritch Blast beams?
2
How can a wizard add their ability mod to Magic Missile's damage at a lower character level than the Empowered Evocation feature?
2
Are these homebrew attempts at recreating some blast shape invocations from 3.5e balanced for 5e?
9
How does the Potent Cantrip-Sidekick Feature work with multiple Eldritch Blast-beams?