How does a dire toad's tongue attack work?

The tongue attack is unchanged by the D&D 3.5 Revision Update booklet.

(As an aside, the tongue is the focus of the dire toad's extraordinary ability improved grab. If the tongue's usable at 0 ft. this is dumb, but if it's usable at, like, 30 ft. this is awesome, as, instead of dragging its tongued foes toward it like one would expect, to maintain the grapple the dire toad must enter its foe's square, allowing the dire toad to launch itself across the battlefield, Spider-man style, using its foes. That's cool and ridiculous.)

Note: If moderators insist, I'll break this up into multiple questions, but I believe all one's dire toad tongue needs should be met by a single multi-part question.

No discussion of enormous toads is complete without one of the best illustrations in the Monster Manual for Advanced Dungeons and Dragons. 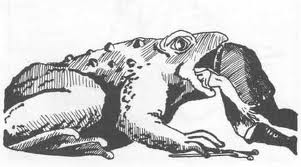 You're welcome. And, yes, the D&D 3.X dire toad has the extraordinary ability swallow whole, too.

Also:
This creature uses its tongue primarily to start a grapple (no damage, etc), so one can easily homerule that toad is smart enough to make a touch attack with a tongue.

Description of the Improved Grab says:

When a creature gets a hold after an improved grab attack, it pulls the opponent into its space.

Not the answer you're looking for? Browse other questions tagged dnd-3.5e monsters animals natural-weapon or ask your own question.

7
Swift casting using a Warpriest's Fervor, while two-weapon fighting
7
Is the attack entry of the Yagnoloth (MM 2, p. 203) in error?
3
Is it possible to apply Empower Spell to Dispel Magic?

8
How Does Inappropriately Sized Spiked Armor Work?
3
Some combat questions about the rod of ropes
5
How does Pathfinder Dire Crocodile death roll work?
5
How similar to normal attacks are attacks made with a telekinetic violent thrust?
3
How to make efficient use of a Cragtop Archer's Arcing Shot?
4
When a creature needs to hide only during some of its movement, how fast can it move?
7
How does a gelatinous cube's special ability engulf work?
3
Can a giant that takes Quick Draw make iterative attacks with thrown rocks?
6
Does thunderous throw permit iterative attacks with two-handed thrown weapons?
5
Does a creature polymorphed into a Giant Ape carry ammunition to make its ranged attacks?