How best to progressively reveal the layout of a location to players?

I have been gamemastering tabletop RPGs for years now, but I'm still wondering what is the best way to deal with this.

Specifically: how to graphically describe to your players their surroundings when they crawl in a dungeon, explore a spaceship or sneak into the local inn by night. The goal being for them to discover the architecture of the place as they progress inside, without any initial idea of its size, main rooms or exits.

What technique are most effective, to this end?

Ideally I'd like a solution that doesn't require electronic devices nor too much preparation work, and requires minimal drawing.

I have used the following methods in the past:

This question is related, but not similar to, Could a "Fog of war" prop break a game in any way?

I print off custom maps from map creators, then lay an acrylic sheet over top. The hard surface is easier to place minis on and you can use dry-erase markers to augment the map with traps, AoE effects, etc.

To add Fog of War to this setup, I use butcher paper in between the map and the acrylic then slid it out as the players progress. I have also used overlay map pieces (from the map creators) to hide portions of the maps (a roof for the hut, cave rock texture, etc.). From the player's point of view, they see a large map with a full-colour map texture but no paths or rooms or interiors. These pockets get 'revealed' as they get in range. It has worked well for my games.

I've played the majority of my tabletop games online over the years. Therefore it's easy to use a site like Roll20, which offers a built-in Fog of War option. I personally don't really see an issue with using something like this in a live session, but typically I just don't draw maps at a face-to-face session unless the players have rolled initiative or it's suddenly become important for the players to know the spatial dimensions of their surroundings.

Being good at drawing is a non-issue, really. If you have Parkinson's or something else that would make it difficult just for you to draw a straight line, then I would advise that you use a computer screen with a tile-based map builder, such as MapTools or Roll20. Otherwise keeping it as minimalist as possible ensures that the players take heed of your verbal descriptions more carefully, not to mention it's just better for the imagination if there isn't a representative image of what you're describing in front of you. Maps are best used to solve practical problems such as "I need to make sure I'm in this position so I can execute these attacks," or "I need to know how long this corridor is so I can know how long it takes me to run to the end." I never use maps as the aesthetic presentation.

The way I've done this in the past has been drawing the map progressively, you don't need to be a good drawer. You just draw in lines for walls, and doors etc. You can get a cheap whiteboard from any number of shops along with some dry-wipe markers (or just laminate some sheets of paper). Use that for the game board with a grid across it for scale/size and it's easy to draw in walls along the grid lines.

i.e. "you enter a 30' square room with two doors in the far wall", draw in the shape of the room and location of doors, then continue the description of the room for flavour.

If playing online then tools like MapTools provide line of sight and vision calculation facilities that automatically handle fog of war for you.

One thing I don't recommend is just revealing the map ahead of time. That can spoil a lot of the fun and feeling of exploration, of not knowing what is around the next corner.

As a master i faced this problem since the beginning: i always like to include some sort of exploration in my adventure, and wide fighting areas, resulting in big maps.

The best and practical way i use to deal with it is to draw the map while the characters see the actual part of it, but dividing the map in "drawing zones".

When the characters step in another zone i erase the previous zone and draw the start of the new one, but only the part of the zone they can actually see. To figure this out think at the mechanics of different stages\maps and fog of war in games like Baldur's Gate.

This has several main effects:

As for the drawing surface, two solutions provided the best results in the years (forgive me for strange english terms, i'm not a native speaker):

1 - A foldable vinyl or plastic sheet, gridded and drawable with eraseable markers. Mine is 80x60 cm. Should be something like this: 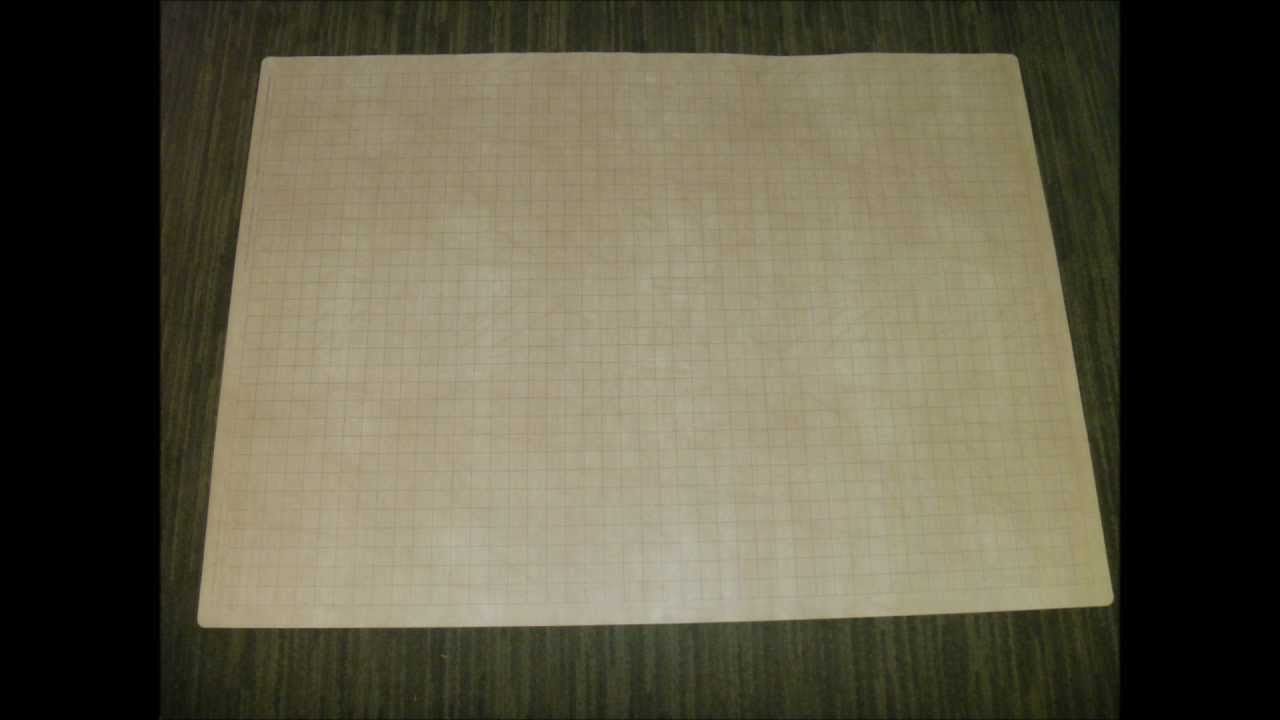 The real plus is to have it gridded and usable on both sides, so you can always have 2 zones drawn.

2 - A foil of bright white vinyl from a fabric store which can be drawed and erased with water markers. We found a local store which sold it like plain fabric is sold, in a big roll, cut per meter. Then draw a squared grid on it with permanent markers (or find a gridded one). So you can have a permanent grid while drawing and erasing with water markers. The result should be something like this: 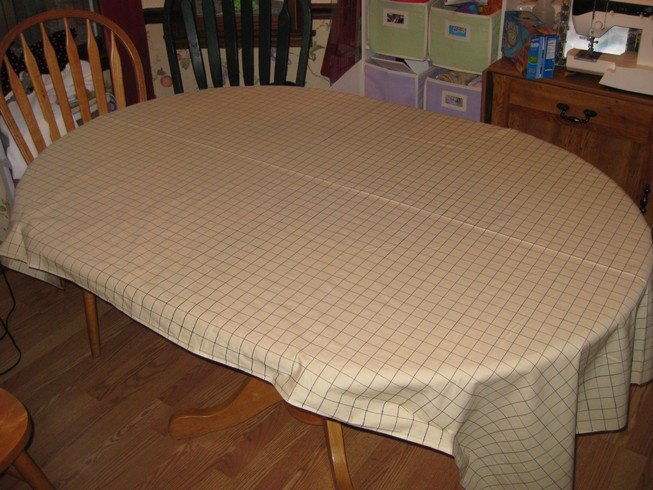 Worked well in big events - boss fights, sieges, ecc - and with situation where the entire map is known to the characters. But the actual space on the table is always a bit messy for player objects, beers, sheets, beers, dices and beers. So we decided for the first solution while playing normally.

Most big screen TVs (small screen ones, too, I guess) can act as monitors nowadays, especially with HDMI. I've run games with ScreenMonkey before with that kind of setup. I had to move the player's minis, tho. They sat around on the couches and used a laser pointer to show me their moves. I'd probably do it with Roll20 or MapTool, nowadays.
So, if you have a computer with HDMI out or some other connection option and a largish screen TV, you can do this with little expense.

... I'm still wondering what is the best way to deal with this.

The reason you are still wondering is because there isn't a best way. The best way depends on the needs of the particular game system and the objectives of the players.

For example, let's say I have an adventure set in the Sydney Town Hall. What kind of geographic information do the players need?

First they need to get there.

The above assumes of course that the journey is for some reason worth role playing rather then saying "You arrive at the Town Hall ..."

Once there, their objectives will determine what information they need:

When disclosing information, your role as a GM is to act as the interface between your imaginary world and the players. This means that the most important information needs to be delivered clearly and unambiguously up front. Does geographic information add or detract from that purpose?

If your players enter a room containing a dragon then nothing else matters, tell them about the dragon, lay down your prepared battle map and roll initiative. Alternatively, if they are investigating a murder then the clues (whatever they are) matter, the size of the room is probably irrelevant. However, if this is an old school dungeon crawl where the exact dimensions of the rooms will lead you to discover the location of the hidden room then drawing a map for your players completely invalidates the point; you might as well just tell them where the secret room is and be done with it.

For some interesting discussions on this and some solutions to organising the information more generally see The Art of the Key and On Set Design.

I had a GM many years ago who used to progressively draw the map for us using tracing paper that he would overlay on his original map behind his DM screen, update, and then hand back to us. This worked well for us, but I'm eager to try all the other methods people have posted here to compare.

I have two methods. I have a "master" A4 map for me, this map has all the secrets and all the nasties. I print off a "clean" A3 version of the same map, this is put on the table and is covered up with A4 sheets in an "iris" fashion. The iris is moved by me as the dungeon is explored.

I also "trace" the master map and use this tracing as a "purchased" map if such a thing is available - that way there is an A3 map with GRIDS on the table and a very rough "traced" map that was purchased (and might have mistakes) is such a thing was available.

I have never used a fog of war approach. If I needed to then instead of an iris I would have blu-tacked smaller cut outs overlaying as appropriate - I would remove layers when I needed to (and return them when necessary).

19
Could a "Fog of war" prop break a game in any way?
19
Player maps - draw beforehand or during exploration?
8
How to Fog of War an official adventures map
3
Setting up a Dungeon Map
1
Should players see maps of locations they are in?
2
When should i reveal new sections of a dungeon?

5
How best should I organize the action cards in Warhammer FRP 3e?
21
How do I balance detailed encounter maps with not wanting to give away my dungeon layout?
4
Hoard of the Dragon Queen hatchery cave layout
9
How can I use dungeon/location moves without stalling gameplay?
8
Is it best practice to reveal monster information about resistances/vulnerabilities/immunities to the players?
25
How do I pick a location to play a tabletop RPG?
6
Is there a canon map/layout for the House of Inspired Hands?
49
How do I handle when my players overestimate the importance of an encounter/a location?