Mood lighting for a dungeon adventure

I'm looking for some specific solutions to help with the following situation:

I will be running a 4 to 5 person Advanced Dungeons & Dragons 1st Edition adventure. The setting is the classic underground creepy dungeon. I'm trying to figure out a way to provide good mood lighting (dark and creepy), without sacrificing the GM or player ability to read dice, maps, character sheets, etc.

It will be in my home, so I have the freedom to do whatever is necessary.

I'm not tagging it as adnd1.0 because this could apply to any RPG.

My first thought is to create low level ambient lighting, like strings of holiday lights around the room on a dimmer. Then give the players a light source similar to their in-character lighting.

If their character has a torch, give them a candle, a flashlight, or a reading lamp. If the mage casts light, turn on a side-table lamp next to him. (And if you're playing 3rd Ed. and someone has a sunrod, just turn the lights back on.) When the characters enter a room or cavern that has daylight streaming in, turn on the overhead lights and everyone will squint and blink appropriately.

Don't push it so far it's really difficult for them to read, though, you're going for effect more than realism here. And make sure you give yourself a good reading lamp.

The creepy part could be a looping sound track of dripping water coming faintly from your kitchen and another one on the basement stairs.

I would recommend beyond lighting, using music. I have found that, personally, using music is a great way to cause a mood without needing to change the lighting much. For instance, I use a set of songs from a "modern classical" group Nox Arcana. It is gothic and creepy sounding, background enough that you tend to not notice it, but up front enough that when you do it only adds to the atmosphere.

As to lighting, there are two real options. One is to go with a darker lighting, with personal low-light lamps (think targeted LEDs) for people to use when they have to read. Another option, that works surprisingly well, is to make the light too bright. Yes, too bright. It makes people a little bit more on edge without making it obvious what you are doing. I remember reading about a horror campaign someone was running, and they went with the too bright scenario (not blinding, just a little brighter than is normally comfortable). They said that the players all loved the scenario, even though it was nothing that special. It was purely a setup of mood, but in the reverse. It also has the side effect of not clueing the players in that it is going to be creepy from the beginning.

If it is going to be creepy, and they know it up front, then "mood lighting" is your best bet. I think I would go with the LED personal lights then, and have a reading light attached to your screen so you can see the notes. That would also add a bit of light to your face, increasing the creepiness factor of the GM. :D

How about using a good old oil lantern or two? While not quite medieval they provide a nice and warm light, not unlike torches. 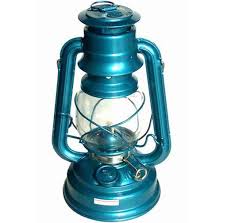 Where I'm from they cost the equivalent of around 10-15 dollars and you can get them in big stores/garden supplies/DIY stores. A bottle of lamp oil costs maybe around 2-4 dollars and will last you for hours and hours.

Although using an open flame the casing and glass make them really safe for indoor use. (I'd even argue that they're safer than candles as they're not as likely to tip over or accidentally set fire to your handouts...)

One of these will easily light a small-to medium sized room and provide enough light to read. Most of them come with a dimmer that lets you adjust the wick length and therefore how much light they give... So you can even make them lighter/darker to fit your current situation.

A black light does wonders: It allows everyone to read paper fine as the (generally light) background glows. It keeps the room really dark, shadows bigger, and give you an eerie mood. It is enough light to not strain your vision. All in all, awesome. ^_~

If you have access to a side lamps, you can get a LED changing colour bulb with a remote control. This should add some light for specific things: red for combat, green for rest, purple for sneaking...

In addition to a good soundtrack (Immedidate Music's The Demon Within for example) and some good background noise, this should give you a nice creepy feeling to your game.

As a side note: this can create a tense atmosphere around your gaming table. This is hard to sustain in long stretches of time -- how long depends on your experience using those. I would have semi-regular breaks in another room to decompress.

Clearly, if your players and yourself wear hawaiian shirts, the mood is going to be killed. Ditto if everyone starts talking about the latest movie/book./TV show/yadda. The players need to buy-in into the atmosphere.

Not the answer you're looking for? Browse other questions tagged props or ask your own question.

6
How can I make a working torch to use with miniatures?

10
Where can I find good 2D representation of AD&D 1st edition monsters
10
Resources for 3D printable RPG props?
21
How much detail should I include in medieval maps for players?
5
Is expanding foam a suitable material for LARP weapon construction?
11
How should I handle signalling & costuming for an “ascended mook”?