How much does a large monstrous spider weigh? 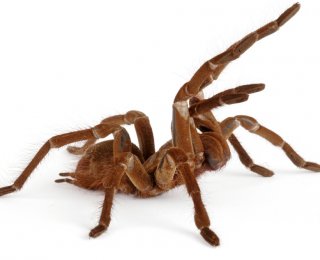 The first spider shape an Arachnomancer gets will be a small, medium, and large monstrous spider. Let's just talk about large size for the sake of argument.

According to a National Geographic regarding tarantulas:

Some of the largest species of tarantula may weigh over 85 grams (3 oz); the largest of all, the goliath birdeater (Theraphosa blondi) from Venezuela and Brazil, has been reported to attain a weight of 150 grams (5.3 oz) and a leg-span of up to 30 centimetres (12 in)

According to Big and Little Creatures in Combat (SRD):

Am I doing that math correctly? I am not a biologist, but I think a 10 ft. spider should weigh more than a 6 pack of beer.

What exactly is a reasonable weight for a large size monstrous spider? The reason it is important is due to possibly pouncing on people from high heights.
dnd-3.5e monsters prestige-class creature-size weight
Share
Improve this question
edited Mar 26, 2019 at 19:10

There's a factor you missed out on: the square-cube law. As Wikipedia describes it:

Let's consider the implications of this for a moment with a cube of water: it will be one centimeter along each side, and will weigh one gram.

We'll see what the square-cube law has to say about increasing each dimension by 10, using that 10 as our size multiplier:

Applying this to a spider

Let's assume the spider's anatomy remains identical as it gets proportionately bigger, and that an increase in volume leads to an exactly proportional increase in weight. (In reality, an enormous spider would need to have much sturdier anatomy, better breathing systems, and other stuff in order to be able to avoid suffocating and its own exoskeleton caving in on it, but they might not know that. Let's assume imaginary radiation magic is helping here.)

Multiplication factor: 10, for going from 1 foot across to 10 feet across.

This is about the weight of a very young elephant (they're ~200 pounds when born). The large entry suggests creatures this big should weigh at least 500 pounds, so either this is spider is a near-the-mark outlier, or large spiders have actually developed much sturdier, denser, stronger anatomy for their size and thus weigh a lot more. Imagining an enormous spider with more elephantine body/leg proportions is awesome and terrifying for me.

Not the answer you're looking for? Browse other questions tagged dnd-3.5e monsters prestige-class creature-size weight .