How do I fill the DnD 4E Essentials Character Sheets? - clarifications

I'm exercising to start as a DM, and one of the things I'm doing is know how to fill the 4E (especially Essentials) character sheets. I'm not sure what I should fill

Here's a capture with the bits in doubt underlined. 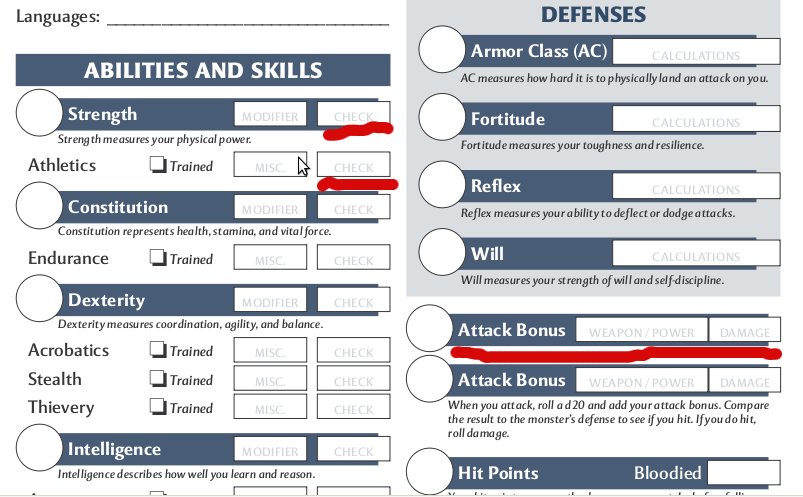 Edit There goes Wizards and publishes the character sheets for this Encounters Season. Everyone's based off of Heroes of Adjective Noun books, and the sheets answer all my questions about this (except this very one, because there are no 'Mod' or 'Misc' boxes :) )

The Modifier space is where you put the Ability Modifer - so with a STR of 14, you would add +2 (page 36 in both "Heroes of.." books.) This box is helpful for powers which have a secondary effect. For example - one attack might also give allies X Temporary Hit points, where X is equal to a certain Ability Modifier.

As mentioned in the other answers, the "Check" space is where you put your TOTAL. This is the value you would use for an Ability Check (using raw STR to open a door), or a Skill Check (Using STR-based Athletics to scale a wall).

The Misc. space is where I usually put special modifiers. Usually this is +5 for a trained skill, +2 for a Racial or Feat Bonus, or a -1/-2 for an Armor Penalty. I don't usually write down the half-your-level math since that is always a part of both checks.

For the Weapon/Powers, if you don't have a DDI and aren't using the online Character Builder - you'll probably want to use those for your most common attacks. Generally, I tend to fall back to writing the actual calculations on the back of my sheet and just keep the front of the sheet clean and readable so it's easy to refer to in game.

The amount you add to an ability or skill check.

For abilities, this is for those times when you are asked for an ability check, such as a strength check when trying to lift something, and is a different number than the ability modifier as the check bonus will include +1/2 level.

For skills, I would write bonuses that are neither +1/2 level nor +5 for being trained into the misc box.

This section is redundant with, and less descriptive than what you would expect to appear on power cards. I would use it as a spot to write in my two most most common attacks: name, to hit bonus, and damage.

The check is your total bonus.

Theoretically, the Weapon / Power box is just for the name of the weapon or power, but if you find it useful, then there is no reason not to add additional information there.

6
How do I change the numbers on my character sheet when I level up?