How to prevent players from using guns in a particular combat?

I am running an adventure that is based on a Vampire-like universe, set in present-day Venice. It's a homebrew story telling system with just a bit of mechanics (the domains of vampires and k20 roll for "luck" element — but no calculations or stats included).

At the very end of the session, there's a very good chance that vampire-hunters will mount an assault the old castle near the town belonging to the vampires. That castle will be defended by NPC nad PC, which are also playing as vampires. I want to make this battle somehow epic and I need more hand-to-hand combat as well as an assault on the gate.

The problem is, two of players have rifles (one of them is an member of the Mafia). I don't have a problem with him convincing his "family" to join the battle with their guns after it begins (kind of a counter-attack), but with two vampires carrying guns, the whole battle won't happen: Who in their right mind would storm a castle with torches and pitchforks, when the defenders have automatic weapons?

That's why I am searching for a good reason to prevent these two players from using their guns while still including them in the fight.

So far I have come up with:

You want to dissuade your players from using firearms - which I do not agree with completely, since the players picked up guns for a reason in the first place. To me, you defined your core issue elsewhere:

Who in their right mind would storm a castle with torches and pitchforks, when the defenders have automatic weapons? 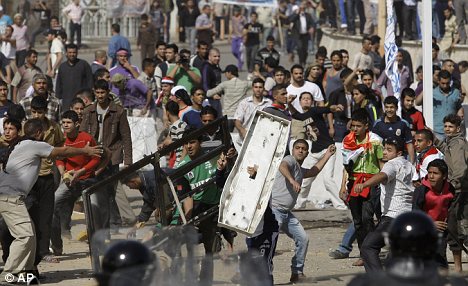 Or, in other words, people with nothing to lose, threatened and desperate. Now, the question you need to ask is "How would I attack a castle with simple equipment when the defenders have automatic weapons?" Instead of taking away the guns effectiveness I would give PCs some good targets to shoot at without making the guns invincible bullet hoses. Make them use it as an asset on secondary targets that they would struggle to reach otherwise or waste them on decoys.

Catch them by surprise

Maybe the assault comes before they secure a stash of weapons and are limited to what's already available in a castle - medieval armours, maces and swords etc. This would allow you to level the ground - your shooty guys would be great at holding the walls, but other players will get a boost too.

Your PCs have two guns, with about 50-60 rounds in them. Now, if they are sniper rifles, then they might indeed kill about 40 people under right conditions, but with assault rifles or SMGs they will be lucky if they can off a dozen. Remember, shooting a moving target at great range is difficult, even if you have high ground. Also, a gun can only fire continuously for a couple seconds at a time, and unless you don't want it to burst into flames, you have to have more guns than you might think. If they for some reason get unlimited ammo and guns, then...

Storm the castle with castle-storming equipment

These hunters might have their own goons and their own connections. 15-20 people does not sound like a lot, but 15-20 people assisted by an armored car seems enough to storm a castle. If you allow religious artifacts you might even have a St.Barbara's Pendant of Protection from Harm, which would work surprisingly well against the likes of vampires.

Use lots and lots of cover

Smoke grenades, fires, movable cover. Obscure PCs visibility and make them hard to hit. Your PCs will be out of bullets in no time and on top of that they will try to conserve bullets, afraid to run out - which adds a lot to epicness and drama. Imagine that the attackers only move when you are reloading and wait until you stop shooting to act!

Just one vampire hunter with a sniper rifle may cause your characters to stick to cover and stop firing altogether. That's the idea of cover fire: if the enemies have more guns and ammo than PCs - which a sane vampire hunter would definitely stock up on - they will shoot back and prevent from that 50 rounds of ammo turning into 50 bullet wounds.

While a main assault of torches and pitchforks draws fire by assaulting the main gate, a small detachment of hunters could try to scale the wall from the opposing side to gain advantage. Your players would then face a choice - to use the guns on attackers or save them for when the hunters get up close?

Use enemies that do not fear bullets

You're looking for small, agile enemies that would be hard to hit, but annoying and disruptive. Think attack dogs, trained birds of prey, remote controlled drones with tactical cameras, suicidal berserkers who would shrug off bullets giving away their lives to end undead abominations...

Take the fight to where guns are a detriment

For example, a dungeon. Tight, narrow passages, damp climate, possibly wet mud where a weapon might get dirty, plenty of shadows and corners for melee ambushes. In such an environment their guns will be just as useful as knives or swords or maybe even less.

Everything is better on fire!

You have a castle with vampires in and a band of hunters to wipe them off the face of the earth. Burn. Them. Alive. Unless the castle is a museum or a palace and hunter are artsy-fartsy about preserving the place, a nice conflagration in the best shooting spots (towers, walls, gatehouses etc.) should instead flush your characters out of their hidey-holes and make them face the wrath of enemy in the open.

In the end, it's not the guns that are a problem, but your players ability to shoot them from a safe spot with impunity.

In a WoD game I played we had to avoid using our guns because we were fighting in a place with lots of gas tubes around. One shot to the wrong place on the wall and we would have been killed by the explosions. I don't know if it can fit with your castle, but it's a plausible reason for going in with melee weapons.

I'd strongly suggest against nerfing your characters' resources outright. It makes for a boring game. Do introduce downsides to their methods and tactics, but slowly. Hint at the potential consequences of using guns at every conflict. Have them suffer a bit for it, and develop an aversion to using guns. Highlight the advantages of other ways of fighting; ie. swords have no ballistic signature.

One realistic reason: Guns are loud. Deafeningly loud. Use them in confined spaces and you will definitely suffer from hearing loss and hope that it's temporary. You may use ear protection but either way, that will quickly become a tactical liability as you are now unable to hear someone sneaking upon you.

You will be better off in open spaces but then you will attract a lot of attention. Everybody in close vincinity will immediately identify the gunlugger, and make him their primary target. The guns will even be heard from far away and any kind of law enforcement will want to investigate.

If you want your vampires to be a real threat to your players, make them obey Sun Tzu's valuable advice (why, one of them may even have fought with him in his time): Fight on your own terms, or not at all. Only a fool would get into a fight where he's outclassed, outmaneuvered, outnumbered or outgunned. We know that vampires are not fools. They should be capable of devising smart responses to things that threaten them like gun-lugging vampire hunters.

The archetypal vampires, valuing their secrecy, will do a lot to ensure that their cover isn't blown. Anyone who threatens that cover will be their primary target. If they cannot deal with the gunners directly, it makes sense for them to withdraw from the battlefield and employ covert hit-and-run tactics against a technically superior threat. And they would be awesomely better at it. It is easy to shoot a vampire in the face when he's running straight at you. It's not so easy if you can never see him until he jumps onto you to slash your throat.

I'm not entirely convinced I've covered everything (so the question might considered a little broad), but these ideas should get you started at least. Hopefully something in it will work for you or spark an idea that does.

I would put out that guns jam in the real world often enough (especially automatic weapons) that providing this as a possibility might be enough to dissuade use. You can have that the player can unjam the rifle if they proceed through "SPORTS" correctly (happens often enough that there's an acronym for clearing a jam) or you can indicate that the jam requires a cleaning if the rifle, and that could be a limited skill the players don't possess, or more likely, they simply don't have the tools on them (requires more than your basic pipe cleaner...)

I would use these methods with caution so that the players can believe that their weapons happened to stop working (i.e. Let the dice eventually take them out with a believable, but aggressive threshold of a jam happening every time they use them, with a possibility for catastrophic requiring "cleaning") . Next time they may be wise and bring backup handguns and cleaning kits as well....

I would expect LOT of guns in such fight, even if finale would be mostly melee. Not everyone has one, but there would be enough to supress two gunners. And I would expect enough guns on the townsfolk side to ensure players prefaring close combat inside castle (assuming that as vampires they are significantly better at it than oposition, firearms are equalizer and they need to make diffrence in abilities more important). Combined with attackers using mobile cover (eg. large trucks), buldozers, molotov cactails, smoke, car reflectors to blind defenders on walls. I would try to make it as much as possible VAMPIRES in MODERN world, not VAMPIRES in modern world that illogicaly pretends to be MEDIEVAL.

Not the answer you're looking for? Browse other questions tagged combat encounter-design homebrew .

15
"Epic Level" Shadowrun
3
I'm looking for advice on Wizard status effect powers. Anyone have good advice?
13
In need of general tips for making more interesting and fun battles
19
How to make combat more tactical?
11
How to make monsters level appropriate during a session?
5
How can I help my PCs fight against a Mind Flayer's psionic blast?
15
What to do when I'm forced to make battle decisions by other players?