What is the Modern System Reference Document

Simply put: what is the Modern System Reference Document?

I tried looking at the site, but it never provided the books for what the items were from at the links i explored. ex: http://www.wizards.com/default.asp?x=d20/article/msrd

If you're looking for the book the d20 Modern SRD is a reference to, this is it: 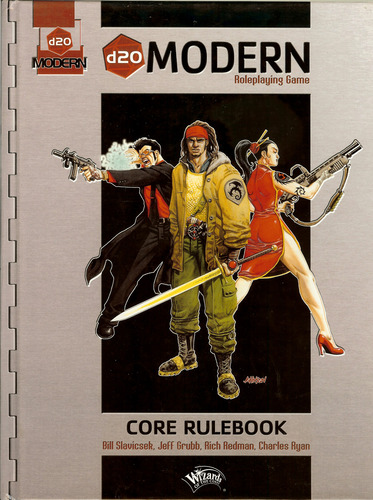 If you're looking for background and a history lesson, read on…

From Wikipedia, an SRD is

The original SRD described the fundamental mechanics in Dungeons & Dragons 3rd edition. The reason Wizards of the Coast (WotC) created the SRD was so that 3rd-party publishers could create adventures compatible with WotC's roleplaying game, with the intended side effect of turning the general RPG industry into one big support network for the game that WotC was selling. (Adventures are expensive to create and don't sell well, compared to rulebooks, but adventures are often considered a necessary part of supporting an RPG line. WotC wanted everyone else to do that low-paying work, with the bonus of advertising for their game instead of competitors' games, while WotC reaped the sale of the actual game.)

Adventure writers need to be able to call out rules and include monster stats and official spells in their adventures, so having a "reference document" to the "system" that had a license allowing them to legally cut-and-paste material was critical for WotC's plan to work. (This sort of didn't work out as planned, but that's another story.)

Later, WotC took their own fantasy SRD and built a new game on that foundation, designed for modern-day adventuring. Since they also didn't want to write adventures for it, they created a matching d20 Modern SRD so 3rd-party publishers could do it all over again for d20 Modern. (This also didn't quite turn out as expected.)

Not the answer you're looking for? Browse other questions tagged d20-modern or ask your own question.

6
Can I double tap with a .44 magnum in d20 Modern?
18
How wealthy can a d20 Modern character be?
4
Effectiveness of thermite grenades in d20 Modern?
7
Are there any established rules for flying in combat for D&D 3.x or d20 Modern?
2
Where can I find a copy of Thrilling Tales *First* Edition?
2
What resources should I use to create a mod for d20 Modern?
3
Is a Archaic Weapon Specialist as melee viable in a D20 modern campaign?
8
Can the Wealth system from d20 Modern be adapted to 5e?
2
How do I make my Dolphin Moreau more Dolphin-y?
6
Is there an easy way to use d20 Modern's combat system in Cyberpunk 2020?