Does a paralyzed druid in air elemental form using whirlwind fall down from the sky?

I assume Yes, but can't find an answer in Pathfinder rules.

Note: This answer was accurate when originally posted in Feb. 2015. In Dec. 2015, the Pathfinder FAQ was updated with this exchange that says, in part, "Magical flight doesn’t act any differently [from mundane winged flight], even for paralysis, as it [i.e. magical flight] isn’t a purely mental action." Also see this answer.

Unfortunately, Pathfinder doesn't classify a creature's flight as winged or not winged, but in this case one can take refuge in the air elementals' official description, which says that

the exact appearance of an air elemental can vary wildly between individuals. One might be an animated vortex of wind and smoke, while another might be a smoky bird-like creature with glowing eyes and wind for wings.

However, many more depictions adhere to the former description rather than the latter, showing air elementals as cloud-like or (obviously far superior) tornado-like creatures. 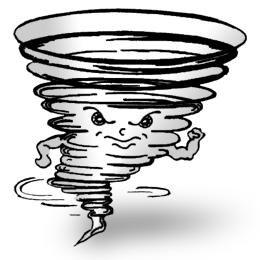 An air elemental such as the one above wouldn't fall when paralyzed:

Emphasis mine, and noteworthy for not mentioning the effect of paralysis on flight by non-winged creatures, which, presumably, means such creatures remain aloft despite paralysis.

By the way, the special ability whirlwind has no impact on this because...

If the creature has a fly speed, it can continue to fly at that same speed while in whirlwind form.

The air elemental can only fly anyway.

Knowing this is useful for a druid in general. If the druid becomes the same air elemental (or tiger or tendriculos or whatever) each time the druid uses wild shape this could, in some campaigns, be a liability... or, at least, make the druid's life more complicated. I suggest the DM aim for consistency across the board when adjudicating this aspect of the special ability wild shape.

The problem with the skill Fly

A flying creature makes Fly skill checks to perform a variety of aerial tasks including to hover (DC 15). A paralyzed creature's effective Dexterity score drops to 0, and that likely gives even the most flight-savvy creature pause when making a Fly skill check. This isn't that much of a concern to the druid, however, because absent from the previously linked description, the Paizo SRD description of the skill Fly includes this text:

You can attempt a Fly check to perform the same maneuver on subsequent rounds. [Note: Hover is a maneuver.] If you are using wings and you fail a Fly check by 5 or more, you plummet to the ground, taking the appropriate falling damage....

In other words, spare the DM some grief and don't wild shape into an air elemental with wings.

A druid in Air Elemental Form gains a fly speed of 60 or 120 feet (perfect), depending on his class level, as detailed in the Elemental Body line of spells. Since air elementals have no wings, the druid is also not a winged creature. The whirlwind ability does not affect this.

(emphasis mine). By explicitly calling out "winged creature" in text, non-winged flying creatures, such as our druid are exempt from this rule.

Yes, they fall from the sky

According to this FAQ item, a creature that cannot make any actions, such as a paralyzed druid in air elemental form, cannot Hover and will fall:

No, any creature that loses all actions can’t take an action to attempt a Fly check to hover in place and thus automatically falls. That includes a paralyzed, stunned, or dazed creature. Magical flight doesn’t act any differently [from nonmagical flight], even for paralysis, as it [magical flight] isn’t a purely mental action. A creature with 0 Dexterity can’t fly, and paralysis sets a creature’s Dexterity to 0. Despite the fact that the Fly skill mentions that bonuses and penalties from maneuverability apply to creatures with natural fly speeds, they apply for any fly speed. If they didn’t apply to creatures that gained flight artificially or through magic, then those maneuverabilities (like the listed good maneuverability for the fly spell) would have no game effect. Finally, the statement “You are not considered flat-footed while flying” means that flying (unlike balancing using Acrobatics or climbing) doesn’t automatically make you flat-footed or force you to lose your Dexterity bonus to AC; it doesn’t mean that flying makes you immune to being caught flat-footed.

Not the answer you're looking for? Browse other questions tagged pathfinder-1e flight conditions or ask your own question.

5
Does the Hideous Laughter spell make a flying foe prone and cause the foe to fall?

6
Question on Stacked conditions
4
How does walking up to Sneak Attack somebody work?
6
What are the rules of using a ranged weapon while flying?
6
Can I Banish a druid when he's in elemental form?
5
Are there rules for building underground structures?
4
How does the ability decrease from a failed Contact Other Planes DC apply in PFS?
7
Falling from low heights; how does 1d6 per 10ft round up/down?
21
Does a creature in flight affected by the Haste spell fall when the spell ends?
2
Can an air elemental carrying a druid provide a better fly effect than the Fly spell?