Why is the Deck of Many Things called the Eater of Campaigns?

I hear this term tossed around a lot. Where does it come from and what does it mean?

The term itself is made up and merely descriptive, and was probably derived from a recent (2010) Penny Arcade strip. 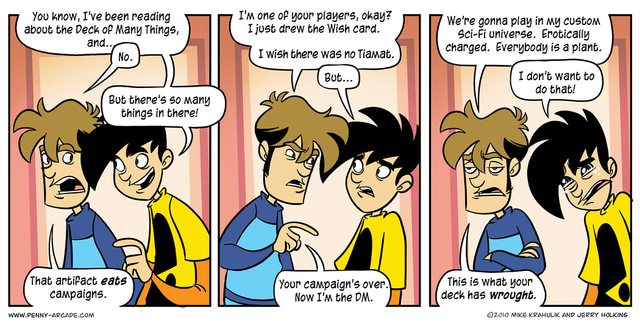 Its reputation as a campaign-ender predates this specific name (and definitely predates 2010), having been recognised as a source of chaos that strains a campaign at the seams as far back as AD&D.

I say the name is merely descriptive: when the Deck appears in a campaign, its effects are often disruptive to a degree that the campaign cannot continue as it was. Since D&D campaigns today are often more story-based than when the Deck was first published, its reputation as a campaign-ender has only grown since then. The Penny Arcade comic emphasises the story as the Deck's potential point of disruption. (Non-story-based campaigns are less vulnerable to disruptions in general, even TPKs. Such a campaign will certainly change direction significantly due a disruption such as a TPK or the effects of the Deck, but won't necessarily end due to it. In practice, even non-story-based campaigns have the potential to be disrupted though, as emerging event lines that the group have invested in may crash and burn — campaign vulnerability to the Deck is a spectrum.)

The Deck is what we as teenagers thought of as cool: meaning very powerful indeed. As DM's we couldn't resist dropping it somewhere we knew the players would find it, and as players we couldn't resist drawing from it. So, it turns up a LOT in a certain type of campaign which is likely to already be fragile due to lack of maturity anyway.

The effects of the deck are hard to undo unless the PCs are very high level, and the lack of restraint we had generally meant that it showed up early, a low levels. It made a real mess.

The artefacts in AD&D were actually worse, IMO. But the deck shared the same really undesirable trait with artefacts: it damaged characters (rather than killing them outright) without giving the player much chance of fixing the character in a non-boring way. Artefacts were worse because they were an on-going problem and what good they did could only be wielded by one PC at a time, thus causing interpersonal fractures in the party and at the table. In this sense, all really powerful magic items can be problematic, especially with players who are immature (through age or temperament).

Not the answer you're looking for? Browse other questions tagged dungeons-and-dragons history-of-gaming .

16
What's the origin of the term "gold piece"?
37
What is the history and significance of the "dire" prefix to creatures?
39
Why is the soft level-cap set at level 20, specifically?
6
Where does the term "Elfgames" come from and what specifically did it refer to?
29
What does "Forgeite" mean? Where does it come from?
30
What does “badwrongfun” mean? Where does it come from?
45
What do MAD and SAD mean?
6
What is the origin of the Leadership concept in D&D?
9
Why is the term pureblood used for the lowest rank in the yuan-ti caste system?