Can you make a sword out of Ivory?

One of my players is a barbarian that levelled into druid, which ultimately meant he could no longer use metal. However, he killed an elephant with its own tusk, and wants to make that 10ft long tusk into a sword and a 6ft tusk (which was broken off in a hurry) into a shorter sword and spear.

Is this possible? What skill would be required to make it work?

I looked it up online and it said that ivory would be terrible for a sword because it would not be able to endure the amount of stress from combat.

I'm going to assume your player wants to eschew metal weapons not simply because he thinks he's compelled to (he's not; it's a compulsion for armour only), but because it's awesome character flavour. Working from that assumption, lets look at the obvious option:

The 3.5 Dungeon Master's Guide, on page 144, has rules for bone weapons. While not strictly the same as ivory in a realistic sense, Pathfinder thinks it's okay to use the same mechanics for ivory (and I agree, realism isn't something D&D cares about enough to quibble over that kind of minor distinction).

Bone weapons are just bad, though: the DMG suggests that they should impose a -2 penalty on attack and damage rolls. As you can see in the above link Pathfinder thinks they should also have a chance to break through normal use unless they're magical. Similar notions can be found in the "Primitive Exotic Weapons" sidebar on page 76 of 3.5's Frostburn. This is moderately realistic, but boring and frankly not very fun.

If your player is hoping for something awesome to come from his passionate devotion to the druidic ways, consider adapting rules for something similarly flavoured but beneficial, like the "dragonfang" weapon material on page 117 of the 3.5 Draconomicon. (Frostburn also has weapons made from antlers and such, which may be useful as a reference.)

And of course, you can always just say "You have an awesome ivory sword now," and use regular sword stats for it. (If you want rules justification for this approach, 3.5 is about as vague as Pathfinder on default weapon materials.)

I can find no reference to stats for weapons or armor made from ivory in 3.5. (Note: BESW found some)

Athas.org, in the Dark Sun Campaign Setting, describes the inferior materials used on Athas, due to the scarcity of metal, as including bone. Since ivory is just bone, this could be used for ivory. Normally-metal weapons made from inferior materials apply a −1 penalty to both attack and damage rolls. Note that Athas.org, though they received official permission to produce Dark Sun material for 3.5 from Wizards of the Coast, is still a third party publisher.

This is irrelevant, however, as

Druids can use metal weapons

Druids are proficient with light and medium armor but are prohibited from wearing metal armor.

Not from any other metal items. They can use metal weapons, or metal whatever, as long as it isn’t armor.

A dagger could be made from stone, but it would be quite inferior to a steel dagger, which is the weapon we have stats for. A stone (or ivory) scimitar or sickle just isn’t going to work, and generally the spearheads in play are also steel. So literally ⅝ of the druid’s weapon proficiencies are in weapons that are made from steel.

Why they cannot use metal armor, but any other metal is A-OK, is anyone’s guess, but considering that the example druid in Player’s Handbook is statted with a scimitar, which she clearly has in her hand and is clearly made of metal in the accompanying illustration, this does appear to be entirely intentional. 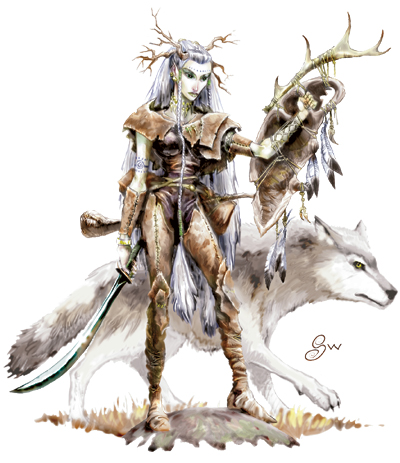 Yes, with magic and the appropriate craft(weaponsmithing) skill.

To solve the "hardness problem" have a high level wizard cast "hardening" on the object. On the 3.5 hardness scale, iron is 10, stone is 8, and bone 6 (as per DMG p144). After the spell is applied, at level 12, the bone will be hardness 12, a fair amount harder than iron/steel. Combining this with wood enhanced with the ironwood spell, and you should have the rules-basis for a fairly cool magical item.

You're correct that ivory or bone weapons would not be practical in a realistic medieval setting where foes have metal armor. Now that we have that out of the way, I would under no circumstance penalize a player for being creative or for role playing.

The weapons will have to be infused by the spirits of the ancestors, etc etc, AKA enchanted.

The Barb will have to create weapon of superb form, according to the enchantments desired. A decently made sword with flawed ivory may successfully tolerate some manner of 'hardness' spell. A +200 Godslayer would require a perfectly crafted weapon using the rarest and finest materials that have ever existed.

So, send your Barb to a Witch Doctor so the weapons can be enchanted. But the Witch Doctor doesn't work for free. She'll need a 3 goats, a llama, and, oh yes, a vial of royal Manticore blood. Taken on the celestial equinox.

And if the Barb does something un-Barblike, it should be known that the spirits will vacate the weapons, leaving them useless, and the Barb disgraced.

Anyway, that's how I'd handle it. What spells, what rules? I don't care, I'd make something up in the interest of the role playing and of character backstory development.

Now the Witch Doctor can come calling when she needs a squirrel, two rats, and while your at it, a wyvern tooth. This gives you more opportunities to send the party on misadventures. 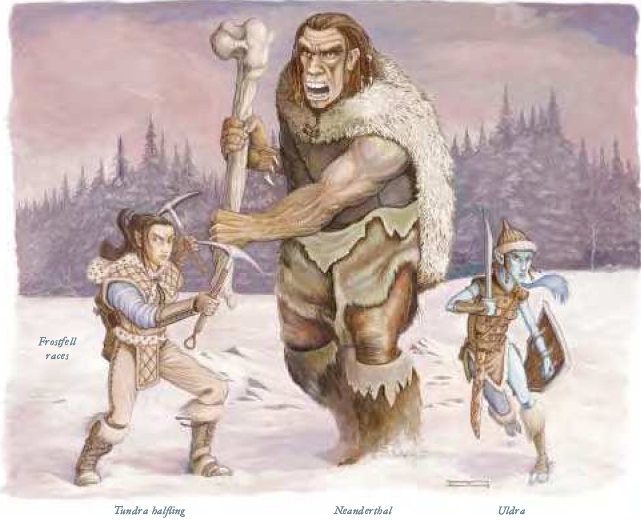 One example of a pretty good bow made from ivory is:

Every time a character using a primitive exotic weapon as a martial weapon deals damage over the weapon’s normal maximum according to its damage die, the character must make a Reflex save (DC 10 + the damage dealt by the attack) or the weapon breaks and becomes useless. A character with the proper Exotic Weapon Proficiency feat doesn’t need to worry about breakage. 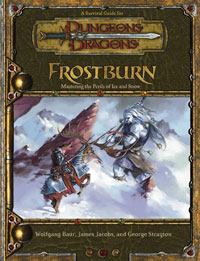 As far as "just your average weapon goes" page 144 Dungeon Master's Guide [IRC] gives you the specifics of bone as a material for equipment, including hardness, hit points, and any special breakage rules.

The Skill required would be a typical craft check of the proper type (be it weaponsmithing or the like).

The Neanderthal, from the same book, has the following racial feature, that would aid in future aversions to using bone weapons:

Druids who want to get around the "can't wear metal armor" rule can make their armor out of dragonhide; it's identical to metal armor except that it costs twice as much. (And you have to kill a big dragon to get it!)

If your player wants to invent a "can't use metal weapons" rule and then work around it, it seems reasonable to adapt the dragonhide rules: a masterwork elephant-tusk longsword would cost twice as much as a normal masterwork longsword (315gp doubled is 630gp).

Note that, per the crafting rules, this would require a very large time investment -- specifically he'd need to find someone with a +10 modifier to Craft:Weaponsmithing and get them to spend 16 weeks (taking a 10 on their check each week). Alternatively, a ninth-level wizard with the Fabricate spell could do the crafting instantly (though it would still require a DC20 Craft:Weaponsmithing check).

Coming at this from a different angle, it's awesome that your player is doing this, he's not getting any mechanical benefit for it, and it seems reasonable to hand-wave the crafting requirements and just tell him it works.

Not the answer you're looking for? Browse other questions tagged dnd-3.5e weapons crafting or ask your own question.

2
What simple weapons can the “Scorching Weapon” feat be applied to?