Can a monkey riding a dog stab orcs?

... Or, for that matter, any other creature it doesn't like? 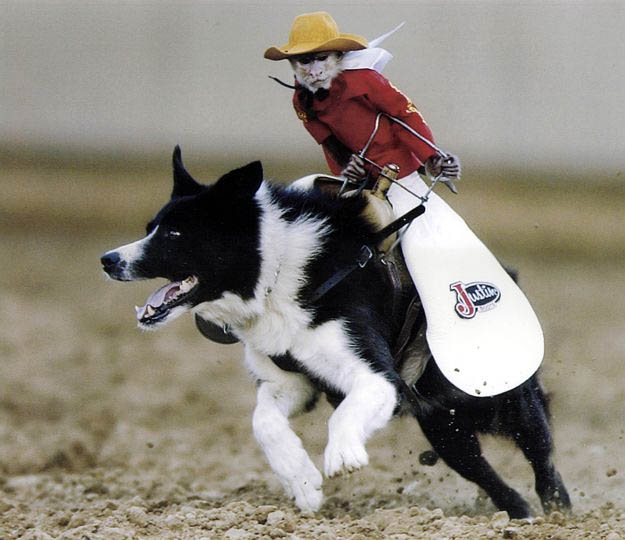 If it's determined that the rules are as they seem (e.g. a monkey wielding a lance riding a dog must dismount, enter a foe's square, then attack a foe), I'd appreciate either a house rule to fix this lamentable situation or an explanation why no fix should be implemented.

"Why would this ever be a thing?"
Einrich Trogen, a human Fighter 2 (eldritch guardian archetype) / Hunter 8 / Mammoth Rider 3, usually fights mounted on his mastodon companion, Fleetwood, and Trogen possesses several feats that make him an adequate mounted combatant. Trogen's monkey familiar, Nielsen, usually shares Trogen's feats, but lacks a special mount, instead riding a Buddy, a common dog with combat training. Nielsen, because he shares his master's feats, is an excellent rider and mounted combatant, but his 0-ft. reach confuses everyone.

This is one of these questions where James Jacobs overrules RAW with RAI.

Reach Weapons: [...] Most reach weapons double the wielder's natural reach, meaning that a typical Small or Medium wielder of such a weapon can attack a creature 10 feet away, but not a creature in an adjacent square. [...]

Note: "Most" refers to exceptions in the doubling rule for specific weapons, such as the whip.

As mxyzplk pointed out, this doesn't rule out a dog-riding monkey ankle-stabbing Giants, as long as they are at least of Huge size, that is 3 Size Categories bigger than the dog (Small). In this case, the dog can enter the enemy creatures square:

Any creature can move through a square occupied by a creature three size categories larger than itself. [And vice-versa.]

This issue has come up on the Paizo messageboards, with Paizo's Creative Director James Jacobs stating:

Game speak for "DOUBLE" doesn't really mean "twice as much." A creature that's Tiny and has a reach of 0 feet who uses a reach weapon would basically go up to the next stage of reach: 5 feet. Something smaller than Tiny would, at the most, go up to Tiny's level of reach—weapons smaller than those wielded by Tiny creatures, therefore, never have reach.

Thus a Tiny monkey with a Tiny reach weapon has 5 ft. reach and can happily stab away at the orcses.

Moving through an enemies space is covered by the Acrobatics skill.

Yes, A monkey riding a dog can make attacks against whomever they choose

It has taken me a while to piece together all the rules supporting this, and make the scenario plausible. This is what I have came up with:

Ride-By Attack - "While mounted and charging, you can move, strike at a foe, and then continue moving." The feat goes on to state that "You and your mount do not provoke an attack of opportunity from the opponent that you attack". This will allow your monkey the opportunity to attack their foe somewhere along the mounts movement course.

Improved Overrun - "You do not provoke an attack of opportunity when performing an overrun combat maneuver and targets of your overrun attempt may not choose to avoid you.". Without this, your opponent can simply avoid you and you will never have the opportunity to strike at them, as well as take provoked attacks of opportunity.

Overrun - "During your movement you can attempt to move through a square occupied by an opponent... This is a standard action taken during your move or as part of a charge." In this case you would be charging. "You can only overrun an opponent who is no more than one size category larger than you"

For simplicity, you assume that you share your mount's space during combat (pg 202 CR). This means that if you are a medium creature riding on a large horse, you are treated as a large model in combat. If you are a tiny creature (One who would normally take up 1/4th a square) riding on a small dog, you are treated as a small model in combat. Note: The rider does not get the extended range of the mount.

Here is the tricky part! Because you can only overrun an opponent no more than one size category larger than you, your dog must be the one doing the overrunning... This works out because it is unlikely that your monkey is going to have 13 strength for the overrun feats, it also makes it difficult because the mount would have to be treated as the Druids Animal Companion (Paladins and Cavalier mounts are treated this way), and have at least 3HD to select feats requiring BAB+1.

MrLemon addressed the reach weapon portion of your question.

3
Can my familiar aid me?

6
Can creatures attack anything within their natural reach?
10
Does moving into an opponent's square generate an Attack of Opportunity when you do so with a 5-foot step?
10
Is this how to overrun?
8
Does riding a large mount as a medium or smaller character affect attack reach in any capacity?
6
Can tiny (or smaller) creatures typically never attack in melee?
4
What is the reach of a Tiny creature, when it's not listed?
13
How does the Sentinel feat interact with the Mounted Combatant feat?
8
How does the Mounted Combatant feat interact with Infernal War Machines?
13
Does mounted combat require a willing rider as well as mount?
3
Mounted Combat: Ride-by attack + Overrun possible?