How can I get better land speed with a warforged?

I have a lvl 1 warforged character with adamantine body and he is SO SLOW.

Every encounter I find myself taking entire turns just to get where I need to be in order to be able to fight.

Are there any feats or any cheap items I can use to increase my base land speed??

FYI: Sir Cromium is above all else a gentleman and a protector. He was created with the sole purpose of standing with his brothers in the front lines to halt the enemy charges. He does not ride and he uses a monocle and a mustache.

I'm a crusader. I have 20ft. speed. I have 0 gold, but we will soon be payed for our services(probably around 500 gold). We do not allow homebrewed material.

Here is a picture of him 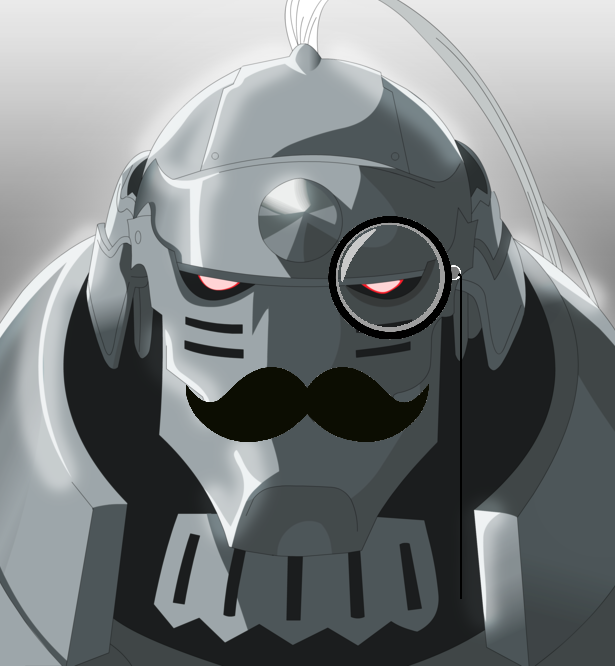 At low levels and assuming you want to continue taking crusader levels, your best option is to purchase psionic tattoos of the 1st-level psion power skate [psychoportation] (XPH 132-3). A psionic tattoo of skate (1st-level power at manifester level 1) (50 gp; 0 lbs.) for 1 min. grants the user a +15 ft. enhancement bonus to its land speed; double this bonus downhill but no bonus uphill.

But, if allowed, I suggest instead the power skate as a potion:

A warforged does not need to eat, sleep, or breathe, but he can still benefit from the effects of consumable spells and magic items such as heroes’ feast and potions. (Race of Eberron 8)

In a campaign allowing psionics and using the rules for magic/psionic transparency a potion of skate costs 50 gp and weighs 0.1 lbs.1

And then, if Dragon magazine items are allowed, consume potions more efficiently using this:

This bulky helmet contains six protected areas for placing potion vials and two metal tubes that lead down the side of the helm and into the wearer's mouth. Each tube extends far enough into the potion vials that the character can drink one or both of the potions as a free action. The helmet's vial holder can be rotated as a move-equivalent action (requiring the use of one hand), setting two fresh potions in the tube areas. Placing a new potion in a protected area is also a move-equivalent action.

Unfortunately, the protected vial holders are only somewhat protected. Since the potion vials have to be placed in the helmet open (though well-covered), there is always a chance one or more them spills during combat or other stressful activity. If at any time the wearer of a ready-drink helm falls prone, there's a 25% chance that each remaining potion spills, rendering it useless. The only way to check to see if a potion has spilled is to remove the potion vial and look, or try to drink it when it is in the ready position.

You're already a magical robot. Who cares if you're also wearing a fantasy beer hat? 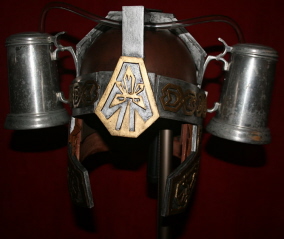 (You won't feel silly alone for long. This item is so awesome the campaign will soon be wearing them. Then you can say you were wearing a fantasy beer hat before it was cool.)

The canonical item here is a pair of Boots of Striding and Springing. Unfortunately, at 5500 gp, it's a bit outside your price range (and is pretty crap.)

Thus, we'll need to be more creative and reference the speed handbook. You don't have use magic device, so a wand of expeditious retreat is right out.

In quite a few levels, you can use a martial study and martial stance feats to get the absolute steel stance from Iron Heart.

Looking at this unformatted list of stuff, a dip into incarnate or totemist may help with a few different binds, but may be more of an investment than you'd like. A dip into cleric so you can power travel devotion with turn undead is hard to turn down.

Unfortunately, there are no "cheap, universal, level 1" options to get around the fact that you're ... a tank. A very slow tank. Ask your party to slow down if they want your help. Sometimes you may have to run.

At level 2, if your speed is absolutely crippling, you have a few choices:

The tooth of Savnok from Tome of Magic or this page on Wizards’ site gives anyone the ability to ignore armor penalties to speed,1 as dwarves can, for the low cost of 2,000 gp. Beyond you at 1st level, too much to sink into a single item at 2nd level, but affordable thereafter.

This requires embedding the tooth in your mouth; yes, warforged have mouths. Whether they have teeth isn’t explicitly mentioned in the text, and almost all illustrations have their mouths closed, but really is presumably something that could vary from one warforged to another anyway. Regardless, even if you don’t actually have teeth, body modification is common in warforged culture, since it’s painless for them, so even if you have to have a slot cut out of your jaw for the tooth, that’s probably less of a deal for you than it would be for someone else who has to get a tooth pulled out.

Do note that you will be under Savnok’s influence if you use this item. This means any armor or shield you use, you have to continue to use or take a −2 penalty on a lot of different checks, and that lasts until you remove the tooth. You can then put it back in, but it takes 24 hours to start working again. As a warforged, you can’t stop using your armor, so that’s a decidedly-minimal burden, but if you don’t want to use a shield, make sure you don’t pick any up.

You’ll also display Savnok’s sign, which is an arrowhead embedded in one’s flesh somewhere. For a warforged, it’s unclear if this would even be visible, but it has no actual effect, just appearance.

You've envisioned, designed and built your character as a tank — a slow, yet powerful and durable melee fighter:

"Sir Cromium is above all else a gentleman and a protector. He was created with the sole purpose of standing with his brothers in the front lines to halt the enemy charges."

He's clearly not meant to be a fast skirmisher, and you shouldn't try to force him into being one. Instead, play him for what he is, and...

Change your tactics to fit your character.

Reading between the lines, it seems that your problem is that your campaign has a lot of open-field battles, where the two sides start far apart, and that your character is getting left behind as his faster teammates charge into battle.

Well, what if they didn't?

Your character is basically a walking (and fighting) fortress. If your teammates, instead of charging into battle ahead of him, were to instead hang back and stay behind him, that would force the enemy to face you in order to get at the rest of the party.

The other members of the party can then let you take the brunt of the attack, and concentrate on what they each do best: ranged attacks, buffs/debuffs, harassing the enemies while they're busy dodging your attacks, or simply driving them towards you.

If there are multiple enemies and they're fast, they can of course try to outflank you and your teammates, but even then, staying close to your character at least gives the rest of the party more cover than they'd have if they'd charged alone into melee. If your party can maneuver to put some protective cover behind them (and your character in the front), even better.

This does require cooperation from the rest of the players, but that's generally needed for any efficient battlefield tactics anyway. The next time your party gets into battle, you might just try saying something like: "Hey, guys, why don't you hang back a little and let me charge them first? Then you can blast them while they're busy fighting me."

Of course, there are some situations and types of battle where this just won't work. One example is if the enemies are actually running away, and your party needs to catch them for some reason. In that case, you may just have to let the fastest members of the party run ahead and hope they're fast enough. Or you might try to find an alternative solution — like following the enemies' tracks to wherever they're going, and fighting them there. They'll have to stop at some point. And warforged don't get fatigued.

How about taking a level in Barbarian?

According to the text of Fast Movement (PHB, pg 25), it bumps your base movement up by 10 feet, so despite your Adamantine body, you should still end up going 30ft. YGMMV.

If that's too costly, Run (PHB, pg 144) will take a full round, but will move you 60 ft, because you're wearing heavy armor.

Until you get some money or other more serious fixes, consider at least picking up the Run Feat so you can move 4x your base speed without penalty. For fixing that "I need to get there, quickly" it'll save you quite a bit of time at the cost of a single Feat.

(It's a shame you said "no homebrew" or I would have suggested wheels!)

7
Protection against mind-affecting spells (low resources, high-level, low will save)
6
Paralysis, what are the best items to protect against it?
6
How can a barbarian rage more often without taking levels or feats?
4
What's a "safer" alternative to a Bag of Holding/Secret Chest?
5
What actions to retrieve and drink a stowed potion?
4
What is the challenge rating of an NPC?

2
Minimizing Arcane Spell Failure with an armored Warforged
7
How do Incarnate-class chakra binds interact with Warforged armour?
4
Can Warforged be repaired with a skill check?
17
Does a Warforged barbarian never get fatigued?
4
Warforged ability damage with Improved Fortification
15
(How) can a Warforged get the Dragonblood Subtype?
1
Many weapons with speed enhancement
5
How can I make a Warforged large?
6
Can a Warforged Charger use weapons?
7
Fastest land speed creature with HD of 8 or less?