Are there A4/letter-sized battle grids?

I want to start DM'ing regularly (I've played my share of D&D, but this will be a different group). Now, I like using grids from time to time, so I'm looking for the right equipment to do so. My idea is to create a toolset I can re-use from campaign to campaign.

My plan is the following: get pathfinder pawns, a larger foldable battle grid and one or two smaller non-foldable ones. I want all my grids to be (somewhat) durable, plain (white or otherwise generic) and usable with dry-erase markers (or something similar).

The idea for the smaller grids is that often you don't need the size that the larger battle grids provide you with as one of approximately A4 (21 × 30 cm) or letter (8½" × 11") size will often be enough, while being more manageable and naturally being able to stay flat.

However, I'm not able to find such a product. Of course I could make something, but I wonder whether such a product already exists.

Cut a bigger battlemat down to size

A straightforward solution would be to buy a standard battle grid, like this one from paizo, and cut it into smaller pieces using sturdy household scissors, x-acto or carpet cutter knives.

The main benefit is that this works exactly like the big one with regards to what pen you can use or how to erase it.

The paizo one (and presumably others), comes folded into thirds, so if you cut it along the folds you get 9 pieces of 8×10" (≈20×25cm). Personally, I'd probably want to get rid of the old folds completely if it doesn't lie flat, so I would add some margins to the cut, making the maps just a little smaller (and the edge squares slightly non-square).

I went ahead and tried it myself. I used the flip mat that came with the German version of the Beginner Box. It's the same size as all paizo mats (30×24"), and as far as I can tell by direct comparison, the material is the same as with the paizo mats (unlike certain, incredibly ugly green pawn feet...)

I tried cutting it using a metal ruler and a carpet cutter, but I realized my carpet cutter is completely dull (I wisely tried it on a corner of the map first). I then opted for a good pair of scissors instead. I used one side of the crease as a guideline, and it went quite smoothly. I then proceeded to cut along the other side of the crease as well, cutting away about 2mm from the edge.

Examining the pieces, I can see no fraying at the cut lines, and honestly can't tell the "new sides" from the old ones. I tried fraying a corner with my fingernail, and that works the same on all corners as well, which makes sense, seeing that the whole map was cut from a bigger piece of printed cardboard in the first place. That being said, if you don't cut away the creases, it seems to fray quite easily at those edges (presumably due to the increased strain). This may or may not "spread" to the rest.

Overall, I am very satisfied with the results, and I'm sure the smaller mats will come in handy for smaller tables.

Here are some pictures I took with my magic potato (click to enlarge at your own risk), the folder and the 30ft. cone are for scale. 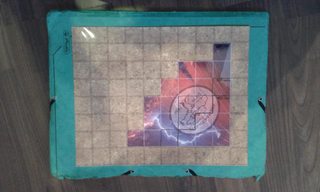 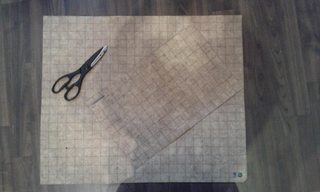 Dry erase markers work very well on clear acetate or poly page protectors. Print your grid, slip it into the page protector sleeve, and you're ready to map and erase. The protectors eventually wear out, but you'll get much more use for your dollar than any commercial whiteboard-like grid you're likely to find.

An alternative that I used to use (long ago) is pre-printed graph paper with a factory applied plastic coating. If you can still find a place that sells this stuff (I used to get it at a store that sold pre-CAD drafting supplies), it's supplied on a roll (like butcher paper), but usually sold by the foot. Cut it to the size you need, punch with a 3-hole punch if you want to be able to capture it in a loose leaf notebook. It works just like the acetate sleeves; and has a similar life.

Next step beyond that would be to buy commercial white board material and cut your own, then apply the grid with permanent marker. This has the advantage of being rigid, and will last longer than the above solutions, but it's a lot more work to produce.

I used an online graph paper maker and purchased a large acrylic sheet from a hardware store (looked for a damaged one for a discount). The acrylic sheet works great with dry-erase markers.

The acrylic sheet also works great over maps, tiles, etc as a steady surface and a place to draw out details like areas of effect, hazards, etc. as well as player/creature conditions.

Many years ago, I bought a pad of 1" hex paper from a gaming store. I have no idea who made it but I'm sure a web search can find a supplier. For example, https://www.kickstarter.com/projects/1730454032/a4-numbered-hex-pad?ref=nav_search, http://tomeoftreasures.com/tot_nontsr/armory/hex_graph_paper.htm.

I also had access to a CAD program, where I made my own hex grids and printed them off at work onto transparencies (back in a time when every office had an OHP :-).

I have some transparent hex grids that came with GURPS and Millenium's End kits. You might be able to find those for sale second hand on the web.

You can also use small tiles that are designed to fit together, but only use a few of them.

Clear tiles that fit together like a jigsaw: https://www.kickstarter.com/projects/307960505/automagic-tiles/description

Not the answer you're looking for? Browse other questions tagged tools battle-map or ask your own question.

28
How do I make my own battle mats?
10
How do you transition from 1-page dungeon map to battle mat?
1
Where can I find A0 or A1 sized maps
6
How big should my battle map be?
10
Representing vertical terrain on a battle map
26
How can we allow remote players to effectively interact with a physical tabletop battle-map?
13
How long is it safe to leave marker on a Chessex battle map?