What are good techniques help remember the interrupts of DND 4e monsters?

For new and experienced 4e DM's alike, a recurring challenge is activating all of the appropriate interrupt powers on monster sheets. It gets really easy to miss something when solo monsters can have 2 or more of these.

What techniques can help alert the DM to activate these powers in time?

[This question was inspired by a tweet by SlyFlourish http://slyflourish.com/]

A vexing challenge to be sure, I struggle with this myself. Although as DM's we don't want to kill off the party too often, it is frustrating to realize that a carefully crafted challenge turned out to be too easy because you neglected to use some of their powers!

Here are a couple things I've done to address this:

Only use one monster or monster type with complex interrupts per encounter. That way, you'll only have to remember one condition for the interrupt. You might think this makes for a less interesting fight, but I don't think so.

In my experience, too many interrupts really slow down the game, so I've become careful with them. Stuff like the ability of some undead to stand up when reduced to 0 hp are ok, but if the conditions are more complex, limit them.

A battle where a lot of things happen is much more interesting than one with lots of interesting powers that take lots of time to resolve and are forgotten half of the time. Its perfectly ok to have two of three monster types in an encounter to have only a basic attack and a single standard action encounter attack.

Highlight interrupt powers so you can easily scan for them when your creatures are hit/bloodied/etc.

I print up my own stat blocks. I copy and paste the text from DDI into my notes. Originally I did this because I like writing on my combat sheets and didn't want to mar my Monster Manual. Now I do it because of syntax highlighting. I use a text editor called vim. It lets me define coloration for blocks of text depending on what patterns appear in the text. Here's an example of a 4e monster I made up: Belligerent Sysadmin PNG

I also made a script that reads in my combat sheets and outputs a PDF with similar syntax highlighting, but with a white background for easy printing: Belligerent Sysadmin PDF

Unfortunately neither of those links shows an interrupt power, but I think you get the point. Interrupts show up in light blue. When something happens to the NPC I scan my combat sheet and read all the triggers on light blue powers. If they match what just happened, we have an interrupt.

I don't expect my vim and pdf workflow to work for everyone (although I'd be happy to share my scripts if anyone wants them). But it works for me. I'm sure you can do something similar in your text editor of choice, although it may require coloring powers by hand.

Other than keeping an eye on the stat block and just..remembering them (possibly unhelpful, but still), I suggest this:

Don't worry about using the whole stat block. Maybe sometimes you forget that you had an interrupt. maybe sometimes you messed up the part where the monster was supposed to split off a minion when it gets hit by a melee attack as a trigger, or the fact that once bloodied, it's acid blood damages it's attackers.. or it has an aura, or whatever else.

Sometimes when I forget a feature (and then remember halfway through), I'll have the monster spend a minor or move action "powering up" and inform the players that now he has an aura, or now this other feature is happening. Sometimes I just start paying attention about halfway through.

I treat interrupts (or any out-of-turn reactions) the same as traps.

Traps just sit there till someone or something sets them off. Same with out-of-turn items. They occur from creature powers, weapon powers, buffs, affects, or you name it based on something that happens out-of-turn for thing controlling the power.

So what I do is make a single card 3x5 for each out-of-turn item (including traps). I first list the triggering event and then under that the object or creature that controls the out-of-turn power. Then I put how many times it can be used during an encounter. Next is the details of powers affect and finally is any resolution (if any) and how to apply it.

I can scan the trigger text at a glance because I layer the cards one under the other, with the trigger text displayed only. It takes me about an extra 30 minutes of pre-game prep one time to do an entire module and have the cards ready by encounter. Players are responsible for their own out-of-turn management.

If an out-of-turn power is used up it simply gets turned over and put aside.

I have found that since I miss very few of these anymore, the players don't either.

I ended up merging several suggestions provided here. Sorry I could only choose one answer! Below is the are some of the initiative cards (inspired by these) I used for the final encounter of the Red Box adventure - not too spoiler-ish I hope.

Note that I put the interrupts on the "Next ->" indicator, so they were always in my face as I moved from creature to creature in initiative order. I also put the main monster tactics on their cards so I wouldn't forget their strategy. 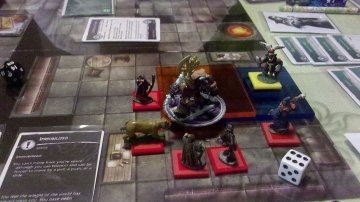 In my case I color-code all status conditions to match my tokens (another borrowed idea and template from here.) 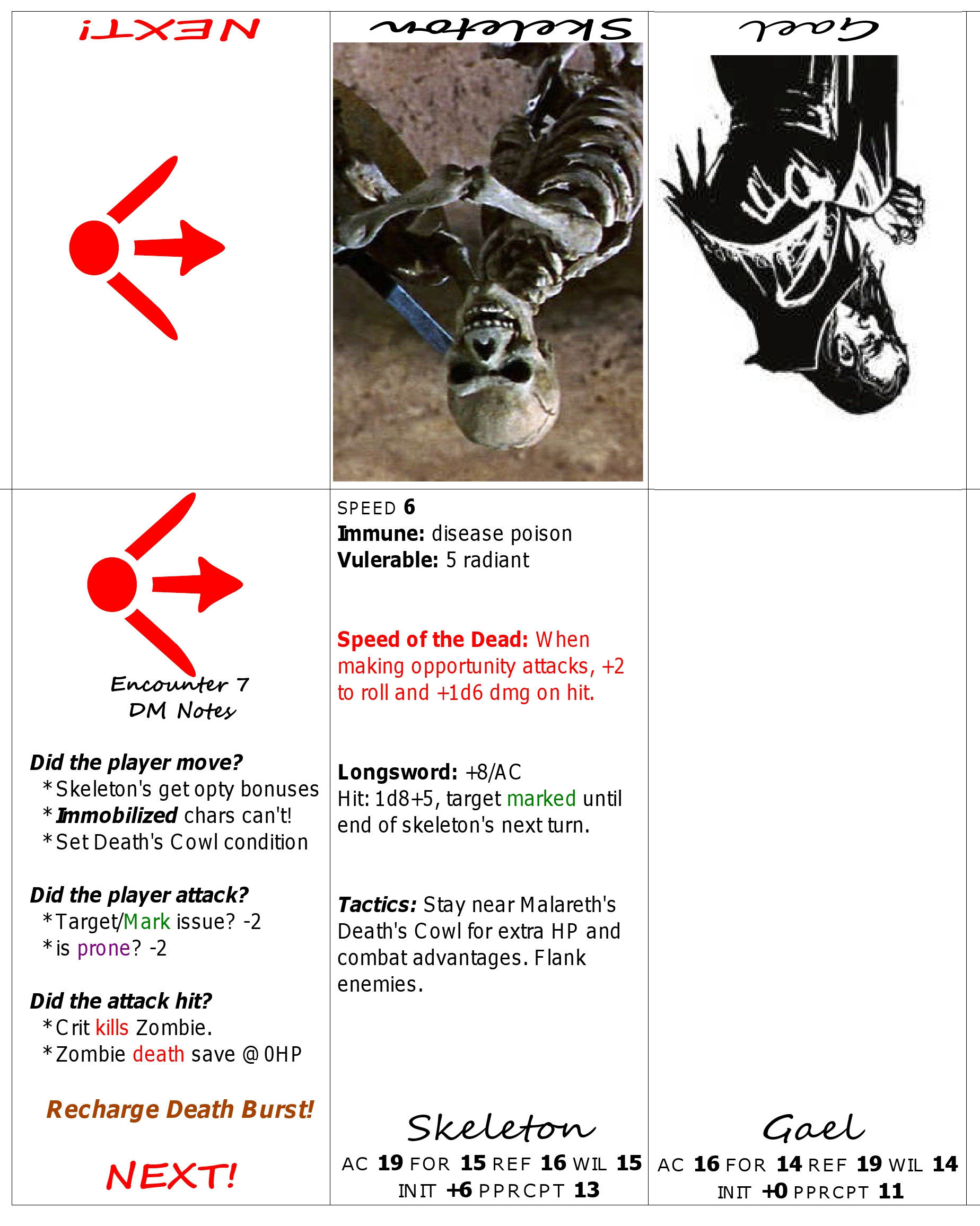 These were produced easily with Inkscape - the free alternative to Illustrator.

Not the answer you're looking for? Browse other questions tagged dnd-4e gm-techniques powers interrupt or ask your own question.

8
How do I get players to use their Interrupts?

12
What techniques are there for balancing power gamers with story gamers in D&D 4E?
8
What are the consequences of the retargeting aspect of the Battlemind's Lightning Rush power on enemy area or close blasts or bursts?
10
What monsters are depicted on the 2008 D&D 4e DM Screen?
7
Where are the DnD 4e rules for perceiving burrowed creatures?
9
What are good techniques to adapt module maps to 3D terrain and/or 2D tilesets?
18
Good techniques for getting player-character backgrounds integrated into the game?
8
Adjusting Combat Balance
3
What are some good combos with Come and Get it?
19
What can I do to help me remember details about the area the PCs are exploring?