How does Knocked Out work in 5e?

I was under the impression that if you reached 0 hp you were knocked out, but I recently found this: 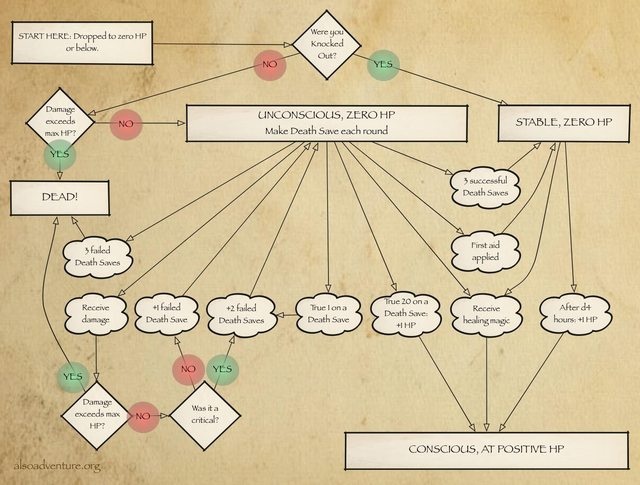 Which states that you can be knocked to zero and still be conscious. How does this work?

"Knocked out" is typically only used for NPCs, though PCs are not explicitly excluded. It's covered on p76 of Players Basic:

Generally, PCs follow the standard rules of being knocked unconscious when they go to 0 HP, not given the "knocked out" status, instead they are "dying."

It might just work as a DM tool to avoid a TPK, but that is not something that you'd generally want to do. This is mostly a tool to avoid killing NPC creatures so you can interrogate or imprison them, even though it does technically work on PCs.

The diamond "Were you knocked out?" actually means "Was an attack made using the 'Knocking a Creature Out' rules on p198 (p76 of Basic)?"

In other words, it's not making a statement about the consciousness of the character, it's asking whether or not the character has received the special "knocked out" pseudo-condition.

If you follow the "no" branch from that diamond you reach either "DEAD!" or "UNCONSCIOUS, ZERO HP." Both of which are definitely not conscious.

If a PC is damaged such that the damage would cause the hp to become the negative value of the PC's current hit point maximum, the PC dies instantly. When a PC reaches zero hp but does not die outright, they gain the Unconscious condition and are dying (unless the enemy chose to knock them out, causing automatic stabilization, or some item or ability causes stabilization). Dying is not an official condition, but if you start you turn with 0 hp and are not stable, you are dying and must make death saving throws. Death saving throws do not benefit from proficiency or ability scores (but do benefit from items, spells, or abilities giving bonuses to saving throws not based on proficiency or ability scores).

If you roll three failures (9 or lower result) you die. A natural 1 counts as two failures, regardless of result. If you take damage from one attack, you fail one saving throw. If an enemy can make multiple attacks using 1 action (e.g. Multiattack), or a spell has multiple attacks (like scorching ray or magic missile), each attack that hits causes a death saving throw. If the attack is a critical (which attacks against an Unconscious creature always are if made within 5 ft of the target), you fail two saving throws.

If you roll three successes (10 or higher result), you stabilize, but remain Unconscious at 0 hp. If you roll a nat 20, you regain 1 hp. Death saving throws are made at the start of your turn, so if you get a nat 20 you immediately get to take your turn. If you are damaged while stable, you become dying and must begin making death saving throws again (the triggering attack does not cause a failure, as it's similar to reducing a creature from 1 hp to 0 hp).

If you are stable, you can spend Hit Dice after an hour (ergo, a short rest) and regain hit points based on the rolls, or can wait 1d4 hours to regain 1 hit point. When recovering from Unconsciousness caused by reaching 0 hp, rises above 0 hp in any way causes consciousness to be regained. Thus, magical healing also removes Unconsciousness.

Most of this can be found in the PHB, Chapter 9 (Combat), in the Damage and Healing section, mostly in the Dropping to 0 Hit Points subsection. The Unconscious condition is covered in Appendix A of the PHB.

Not the answer you're looking for? Browse other questions tagged dnd-5e hit-points unconscious .

25
What mechanic is there to disable a threat instead of killing it?

60
How does extra damage work for critical hits?
4
When using Fly and you're knocked out, do you fall?
13
Can any creature be knocked out?
6
In which directions can I direct Gust of Wind?
7
Is the Spirit Troll unable to be knocked out unless it doesn't regenerate?
7
How does the Healing Spirit spell work when healing unconscious characters?
22
Are there consequences to being reduced to 0 HP multiple times in combat?
9
Is the Oath of the Ancients Paladin's Elder Champion feature intended to still work while unconscious?
3
Does HP fall to 0 if a creature is knocked unconscious from failing a save? If not, how does the unconscious condition end?