How can I make a working torch to use with miniatures?

I'm looking for a prop that would be a functioning torch for miniatures. Does such thing exist? Would it provide enough illumination to simulate how far the characters can see? Current LED technology provides very strong light for a very small bulb so I guess it's possible?

I've read this question and the idea is good, but it would be lot better if the light came from an actual prop rather than a table lamp or flashlight that must be held.

Miniature-scale "flame" lights do exist, but the limitation is not the size or power of the bulb; it's the power source and wiring that's the problem. Here's a visual that demonstrates the real hurdle to using these with movable 25mm scale miniatures: 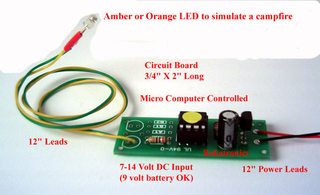 Granted that's a full-featured campfire flame simulation kit with features you may be willing to do without. The circuit board handles the "flame flicker" as well the conversion of the suggested 9V power source to a voltage that an LED can accept (typically ~1.7V).

A smaller solution is possible in theory, using just a coin- or button-cell battery and skipping the circuit board. (For a bit more money, you can even get LEDs with built-in flickering effects!) The battery could be mounted under the base of a miniature. The leads would require disguising or drilling a channel through the miniature itself (the latter would be painstaking, or prohibitive on minis with small-diametre arms, but impressive). I'm not aware of any existing kits or props that supply such an arrangement, so it would be an entirely DIY kitbashing project.

In the end though, this would be almost entirely aesthetic. A normal LED will cast light far beyond the scale radius of any in-game light source, and you don't have room for circuitry to moderate its brightness to adjust that downward. Even if you did, the falloff for real light is analogue and wouldn't help to indicate the hard lines between lighting levels that most RPGs use to abstract lighting.

There are indeed products that exist to do what your wanting, however they are not only hard to find, but also expensive. I am a Model Railroader and have built my own model campfires and torches quite a few times.

If your good with soldering and have a basic understanding of micro-controllers ie. ARM or ATMEL (ATTINY, ATMEGA) you could make your own circuit to run off a coin cell battery that would be only very slightly larger than the battery itself.

I would suggest putting the circuit in the miniatures base, and then using a really thin wire to connect the LED to the battery. If you routed the wire up the back of the minuture, you could then glue it in place and paint over the top of it giving the illusion that you drilled through the miniature.

Hope this helps and good luck!

Not the answer you're looking for? Browse other questions tagged miniatures or ask your own question.

10
Mood lighting for a dungeon adventure

39
Narrative Combat versus Use of Miniatures
4
Are D&D Miniatures compatible with D&D HeroScape?
7
How to handle miniatures on a forum-based game?
7
How can you use isometric maps (or other tricks for addressing 3 dimensions) for miniatures?