Can a Monk "two-hand" their Unarmed Attack for the sake of Power Attack and the like?

One of the players in my group wants to know if you can basically do a double palm attack as a single attack and get double damage while using Power Attack by way of wielding a weapon with two hands. I've looked around and I'm not sure how to approach this. Is there a RAW ruling on it at all or will we have to go to our DM to make a ruling?

No, Unarmed Strikes do not get a Two-Hander's Power Attack bonus.

Attacking with Someone Else's Unarmed Strike

I guess - if you could rip someone's arm off you could two-handedly wield an unarmed strike, but then it would probably just be an improvised weapon.

From Hey I Can Chan

It's possible—and hilarious—for an attacker to employ a foe's unarmed strike by using the grapple action Use Opponent's Weapon (PH 156) (unless the DM says the foe's somehow not holding his unarmed strike). That makes grappling someone and saying Stop hitting yourself! a thing in D&D.

With DM fiat, however, doing the Star Trek double fist punch, you may be able to get a two-handed bonus. 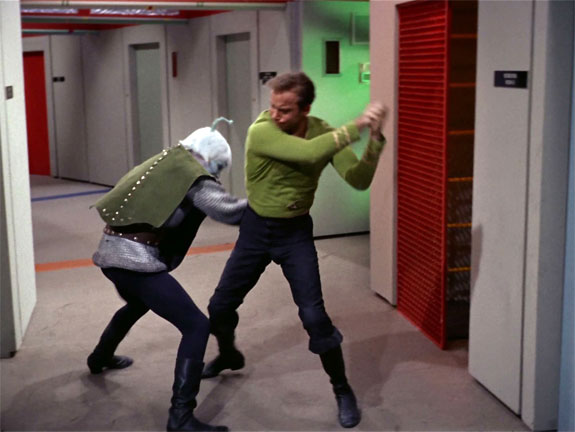 The Hammer Fist feat from Races of Faerun gives you a special attack:

You add one and a half times your Strength bonus on your damage when you hit with an unarmed strike. You must use both hands to make the unarmed attack.

The Hammer Fist feat from Dragon Compendium doesn't require being a dwarf but specifically states you can only make one attack:

You may make a single unarmed attack with both hands to add 1-1/2 your Strength bonus on the damage roll.

A monk’s attacks may be with either fist interchangeably or even from elbows, knees, and feet. This means that a monk may even make unarmed strikes with her hands full. There is no such thing as an off-hand attack for a monk striking unarmed. A monk may thus apply her full Strength bonus on damage rolls for all her unarmed strikes.

Natural weapons are weapons that are physically a part of a creature.

On your action, before making attack rolls for a round, you may choose to subtract a number from all melee attack rolls and add the same number to all melee damage rolls. This number may not exceed your base attack bonus. The penalty on attacks and bonus on damage apply until your next turn.

Probably not by the rules, but I’d allow it

So unarmed strikes are generally treated as light weapons, e.g. for Two-Weapon Fighting. The various advantages of using two hands for an attack do not apply to light weapons, so even if we say you can make a two-handed punch, it would not be any better than a one-handed one.

Note that this even applies when the unarmed strike isn’t a punch at all. A big roundhouse kick is neither stronger nor slower than a rabbit punch; they are both unarmed strikes and thus light weapons.

On the other hand, if both hands are not being used to hold a weapon or anything, and they don’t want to use Two-Weapon Fighting, I see no good reason to disallow a “two-handed” unarmed strike (though I might suggest it be described as, say, a big kick that requires both hands to maintain balance), gaining 1½ Str to damage and 2:1 returns on Power Attack. I’d even probably allow someone with Improved Unarmed Strike to treat their unarmed strike damage as that of someone a size category larger while doing so, since two-handed weapons typically deal damage equivalently to the one-handed weapons a size category larger.

This results in a minor damage buff to unarmed attackers, who tend to need all the help they can get.

The extra damage from Power Attack is restricted to

And the x2 damage is restricted to

If you attack with a two-handed weapon, or with a one-handed weapon wielded in two hands, instead add twice the number subtracted from your attack rolls.

An unarmed strike is always considered a light weapon.

Whether or not you make an unarmed strike two-handed is irrelevant.

Strictly speaking, the Hammer Fist feats Ruut mentions do something different; they give you a Strength bonus to damage for using two hands (but don't technically change the classification of an unarmed strike from a light weapon to a two-handed weapon), so wouldn't actually alter Power Attack. I could see a DM ruling that would allow such an attack to qualify for x2 Power Attack, but it is an odd mechanic for a Monk, especially if the one attack per round limit was waived, as a Monk already qualifies for full Strength bonus with all unarmed strikes. Would the monk simply do 1 and 1/2 times Strength damage plus x2 for Power Attack for all unarmed strikes? Only primary-handed attacks (which doesn't make sense as a monk doesn't have "off-hands")? Bit of a can of worms, really.

The concept may work for Captain Kirk, but I think you'd be hard pressed to find any real world examples of unarmed strikes using two hands (grappling? yes, but not unarmed strikes). D&D isn't very mechanically "real", so it really depends on your game and the degree to which you care about dis-associative mechanics. If your game is more cinematic-style action, this may work well. But for gritty realism, I think it would engender suspension of disbelief.

Not the answer you're looking for? Browse other questions tagged dnd-3.5e monk unarmed-combat .

16
What are the restrictions of an unarmed strike?
3
Does a sole natural weapon attack count as two handed when using power attack?
21
Does a monk with Extra Attack trigger Martial Arts if only one attack is unarmed?
9
Can a multiclassed Kensei monk/Swashbuckler rogue use an offhand finesse weapon to trigger Sneak Attack, without using a bonus action?
6
How do you calculate Power Attack with Dragon Ferocity with unchained monk?
13
What are the ways my non-monk character can improve their unarmed damage?
0
How can I calculate the optimal amount of attack bonus to give up when using Power Attack?
4
How does a Monk benefit from the Power Attack feat when flurrying with a quarterstaff?