How to run a chess inspired D&D4E encounter?

Is there a way that you could run a chess inspired encounter for D&D 4E? I'm thinking like the characters themselves are involved in a human chess game albeit still allowing them to keep some of their abilities or allow them to take on the role of a chess piece but the chess piece has some unique powers. Hoping to give the party something fun and different as an encounter.

What a neat idea. An old issue of the Dragon Magazine had something like this also the module 'Land Beyond the Magic Mirror' did this too, underwater.

Make the board surface behave so either an incorrect chess move is not allowed or would result in a trap/defensive attack/penalty. The second option encourages the restricted movement that is a part of chess, but doesn't stop a character from 'breaking the rules' (barbarians or knights might make a sacrifice to alter the game). Also if the piece type and position means that a normal chess piece could not threaten or attack a square then the character can't either.

Second: Either randomly assign a location/piece to a character or assign it by class.

Third: The remaining pieces can be NPCs or monsters with set powers. Due to the number of pieces on the board I would scale the difficulty level back to at least one level below the party and maybe two. If you want this as a final encounter/challenge then scale it for that.

When 2 pieces 'fight' you might run a mini-combat just between those pieces. When non-character pieces are involved, normal chess outcomes happen, but when characters are involved, maybe they stay and 'fight' or maybe both 'pieces' teleport to a different location and run the mini-combat. Winner gets to go back to the board, loser has something happen, might be lethal or it might just be a hindrance of some kind and they are out of the game. The remaining party members may or may not know what is happening when someone is out of the game.

Maybe one member of the party must do all the moving or characters move themselves and the group decides for the remain NPC pieces. Your choice here.

The only other thing would be to choose a game in progress or a new one. I would opt for one in progress. this should make the encounter manageable within a single game session. 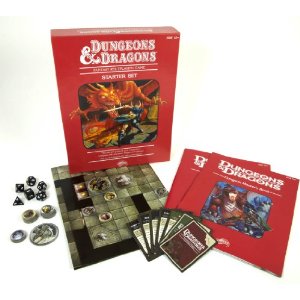 Encounter 4: The Trial in the Twisting Halls adventure that is included in the Red Box's Dungeon Master's Book is played out on a life-size chessboard and includes several animated statues and special movement rules.

I ran it a few weeks ago, and it was great for new users to learn about automatic damage and how to use clever moving techniques to flank/avoid enemies.

Using three Essentials, but not red box generated, characters they managed to deactivate the Queen without a shot - that was fun! :-)

I remember an old AD&D module inspired by Alice in Wonderland where the players took on the roles of chess pieces and had to fight their way across the board.

You could try a mechanic where they the players take on roles as pieces, which limit their attack targeting options, and their options to support other characters – i.e., if you are a rook, you can move any distance in your row or file, and can only target creatures (with beneficial effects or attacks) in squares you can move to.

The difficulty is that if you restrict players options too much they may find the encounter frustrating. You'll want to strike a balance between players' roles in the chess match, and their actual character powers and abilities.

I would take an alternate approach of bonuses and benefits rather than penalties.

Consider a room, 10x10, with a chessboard in the middle (and if possible, haul out a real chessboard). Set up black as a complete chess side. Pawns are minions. The board is enchanted such that there are significant benefits if a player moves onto a square and acts according to the piece's movement rules. Of course, the balance to this is the functional equivalent of 2 or 3 standard encounters packed into one.

All pieces are vulnerable 5/10/15 (depending on tier) to damage if it comes from an attacker acting within the rules. They are resist 5/10/15 from other damage.

Every piece may take a minor action to make a basic attack within the limits set by their role. If the attack kills the enemy, they may shift into the enemy's space.

Each piece has a special ability (or two):

In this way, if the players want to engage off the chessboard, they are welcome to do so (or otherwise engage in creative manipulations. The more they engage with the rules, the more benefits they get, making the encounter easier.

Have the tactical space be magical in a way that limits the characters' movements, line of effect, and valid targets to powers based on their position and the "role" (e.g. bishop) that that have taken on. Have it be a non-dispellable artifact effect.

Use an 8x8 room (or multiple thereof) with the floor colored alternating white and black. (Your players should get the hint from that.) Assign the roles based on their position as they entered. Alternatively, you could have them somehow choose their roles.

If they are a "rook", the only squares they have line-of-effect to are those that the rook could legally move to on the chessboard (straight vertical or horizontal). Same for bishop and knight. If they kill an enemy, they have the option to shift into the fallen enemy's square.

You may want to restrict the use of area attacks. Again, you could say that the only valid targets are those on squares to which you could move.

To prevent the players from feeling "stuck" in a role, you could allow a non-standard move at the expense of a healing surge. That would encourage movement within the game, but allow for alternate movement.

Not the answer you're looking for? Browse other questions tagged dnd-4e encounters or ask your own question.

7
How can I improve one-off play with paragon or epic tier characters?
5
Is this charge-based build legal?
7
Is altering the adventure to suit the players the purpose of the DM in D&D?
1
How do I gain access to Perception training as a Hexblade MC Rogue in early Heroic?
13
My players almost die in my encounters every time. Does this mean my encounters are too hard?
10
How to get the most out of an encounter by combining foes
12
How do you actually crawl through a dungeon in online play?
7
How can I recreate King Leoric as a solo monster for a level 7 party of five?
3
I'm worried the PCs in my low-magic, low-gold campaign can't keep up with the increasing encounter challenge
24
How do you better keep track of enemy abilities and tactics during combat?