How do you know if a weapon is two-handed in D&D2E?

The only weapons I can find that are explicitly stated to be two-handed weapons are a two-handed sword and a (two handed) bastard sword, which can also be used one-handed.

But every other weapon that I can see doesn't specify.

What about a Battle Axe or a War hammer? They sound like they could be used two-handed. And if not, are there no other two-handed weapons in existence? 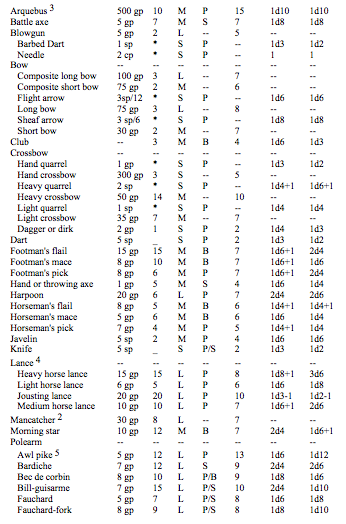 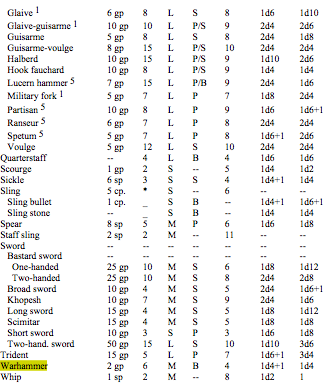 If it's large and you are size medium then the weapon requires two hands.

Chapter 6 on Weapons on Weapon Size says that

A character can always wield a weapon equal to his own size or less. Normally this requires only one hand, except for some missile weapons.... A character can also use a weapon one size greater than himself, although it must be gripped with two hands. (Player's Handbook (1995) 96)

Thus, for example, a Medium creature using a trident must use that trident in two hands.

Not the answer you're looking for? Browse other questions tagged adnd-2e or ask your own question.

6
How can I use the skill system from D&D3e in AD&D2e?
2
AD&D/2e: how do you play a PC that's from a NPC race?
3
How many bonus priest spells do you get for high Intuition?
10
How do you determine the success of a nonweapon proficiency that the character doesn't have?
5
Where do the rules say a thief or bard can gain two-weapon fighting proficiency?
13
How much damage does an ogre do with a weapon?
7
How does “Know Age” work with bones?
4
Ranged weapons without values for “short range” category