I am a bit disappointed by the lack of tactical positioning in 5e, as evidenced in questions such as Are melee combatants limited to standing around saying "I attack"?.

I have tried porting flanking from 3.5e into 5e, but I was not happy with the results. Therefore, I decided to use a facing house rule, partially based on the suggestions in the 5e DMG p.252. 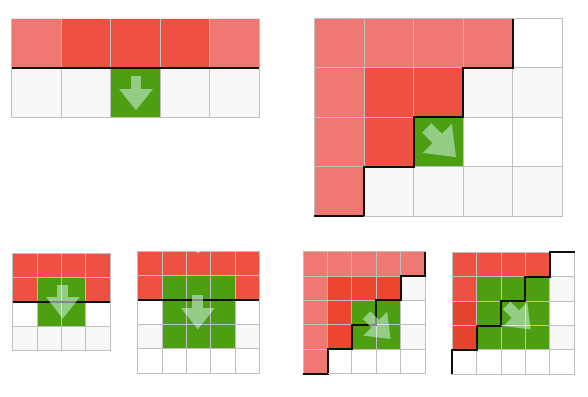 Each creature chooses one corner or side that they face.

Turning is changing the facing by more than one tick.

Green does not provoke an opportunity attack

Creatures in red squares do not provoke opportunity attacks from the creature in the green square.

My goal is to make tactical positioning more important in 5e. However, an equally important goal is that my changes do not favour certain classes far more than others.

I did add the DEX penalty for this reason: Blasting spells should work similarly to physical attacks, and a well positioned blaster should get similar benefits.

On a side note, the rules should also be clear and fast, which is why the delineation between the red and white squares is a straight line over the battlefield.

What parts of my house rules are unfair in the sense that they benefit/hurt only specific classes in a non-trivial way? I am willing to allow minor injustices, but they should not nerf a character concept or optimisation strategy into worthlessness.

A good answer would contain a mechanical explanation of which specific changes are bad for what classes. I am not looking for general discussions of tactical positioning or flanking. An answer that shows that facing is incompatible in general with my fairness goal however would be good.

If I understand your system correctly, it will give rogues an automatic way to activate Sneak Attack:

The green character is the Rogue and the blue one is an enemy. On his turn the rogue steps two squares to get behind the enemy and turns for free. He attacks (with advantage, -2 to enemy AC, and possible more reduction due to the shield), activating Sneak Attack, and then gets to step back two more squares using his leftover movement.

On top of this you should consider things like whether a fighter can riposte to an attack done from the red zone.

Is an enemy/ally in red zone considered to be visible? For example Rogue's Uncanny Dodge says (emphasis added)

when an attacker that you can see hits you with an attack, you can use your reaction to halve the attack’s damage against you.

Can a rogue still activate it while being attacked from behind?

We had two long (8h) session where we tried the facing rules, once on squares and once on hexes.

The players were a Death Cleric, a Vengeance Paladin, a Bard, a Blaster Warlock and a Psion Mystic (from the Web/UA).

We did not notice any specific problems or disadvantages to specific classes, and the fights were quick. It did allow me to do some nice tricky set-piece battles using the geography against the players in such a way that they had to do clever tactical decisions to avoid putting enemies into red squares.

However, after these two sessions, I decided that we will go back to 5e standard rules for movement and OA. We stopped because I felt that only the mechanically interested players (half of the group/those that read the PHB by themselves) were really on board, while the other half disliked the additional complexity, and simply asked others "can I do this?" or "should I do that?".

So my short play-testing of the rules showed that they are viable for the right group, but that group unfortunately would be only 3 of the 5 players I have now.

As suggested in the comments, I'll make my initial thoughts into an answer.

So in a three on three combat, one of the monsters moves away and the Paladin hits with an opportunity attack. He can then move through the vacated space in the lines for free and ensure the other two monsters are flanked.

There is little defence against this and he can do it whenever someone provokes an opportunity attack. This gets more effective coupled with feats like Mage Slayer or Sentinel that offer more opportunity attacks.

I also think these rules make teleporting much more effective and would be very careful with Way of the Shadow Monks, due to Shadow Step (PHB p80):

These guys can not only escape flanking with ease, but can very easily initiate it for no resource cost every turn, making a mockery of dungeon corridor fighting.

Other, resource driven, teleports will also be great using these rules but Shadow Step takes the biscuit.

I'd be interested to see a ruleset like this work. Knowing the people I play with however, they're quite easy to exploit for some classes.

As I have shown in my other answer, this system allows for some unreasonable things to happen: a rogue can walk behind an enemy in plain sight and sneak attack while the enemy is just standing there without doing anything. I have thought of a modification of your system based on awareness.

I think such system makes more sense for the types of battles that happen in D&D. Tactical positioning is more about battles between armies when you have soldier formations that cannot quickly adapt (e.g. turn their facing as a whole).

Not the answer you're looking for? Browse other questions tagged dnd-5e combat house-rules balance facing .

70
Are melee combatants limited to standing around saying "I attack"?

9
When using a reach weapon, which squares around me can I attack?
11
Do creatures with inappropriately sized reach weapons threaten different areas?
10
Does moving into an opponent's square generate an Attack of Opportunity when you do so with a 5-foot step?
3
Is "moving into the defender's space" analagous with "moving out of a threatened square"?
1
Can I use parry attacks of opportunity with Swashbuckler's Parry and Riposte?
5
How does battle map combat work in darkness and heavily obscured areas?
14
How does this change to the opportunity attack rule impact combat?
11
What balance pitfalls result from this house rule modifying the optional Flanking rule?