Is Dungeons & Dragons the origin of “Bahamut” as a dragon?

Bahamut, the platinum dragon god of good, metallic dragons, takes his name from the Bahamut of Arabian mythology, the great fish upon which the earth rests.

The similarities between dragons, serpents, and fish are noted, and the three have been conflated often throughout history. Nonetheless, Bahamut is almost-always, in modern media, depicted as a very Western dragon: not very serpenty at all (cf. Final Fantasy, Ogre Battle, more I’m sure). The Arabian Bahamut, too, seems very distinctly fishy, not a sea serpent or even serpent-like fish.

The name “Bahamut” was introduced to Dungeons & Dragons in the AD&D Monster Manual, 1977 (the dragon itself was in Greyhawk, 1975, but unnamed). This well predates the various video games, at the very least.

As far as I can tell, Bahamut-as-a-dragon is a thing that Dungeons & Dragons introduced, which is where the Final Fantasy version comes from (the original Final Fantasy being very close to Dungeons & Dragons, and including Bahamut the Dragon King as well as Tiamat the Five-headed Dragon). From Final Fantasy, other video games also used the name for a great dragon, and from video gaming this seems to have spread to other media.

But I’m not sure that Dungeons & Dragons is not basing this on still-older media that uses the name Bahamut. So my question is: did Dungeons & Dragons originate the concept of the name “Bahamut” applying to a dragon, or was that based on something else?

Here is what I was able to discover using a Google Books search. Between 1900 and 1975 the words Bahamut and Dragon come up only in obscure research books about the Bible and Mythical creatures. However in all these books, it is clear that "dragon" is a reference to either a Sea-serpent type creature, or the mythical world serpent. (Mostly in reference to passages in psalms and job, as well as Arabic and Jewish mythological writings) It's also clear that most of these books are focused on the identification of Bahamut with Behemoth. Neither of which are clearly dragons.

After 1976, the words show up together in fantasy related material. I was able to find one reference to a generic mythology book from 1987 but its clear that even in this generic book, it is referring to the dragons of D&D fame. (Citing rules from D&D to describe the dragon's abilities)

I think its safe to say that D&D created the connection between the typical D&D Dragon like creature and Bahamut, and that Gygax or Anderson was inspired by the sea serpent when looking for a name for the Good Dragon deity.

It is very possible the answer is yes.

As a dragon, yes, since dragons of old were not referred to as dragons. As a platinum dragon, specifically, I would be willing to say yes as well.

What I did, using my literary collection, encyclopedia library, and of course - google, was display heavy influences Gary Gygax used in his first campaign setting; Greyhawk. In this case, it draws heavy on Arab and Norse mythology. Below you will see reference material supporting that. You will also see reference material showing that dragons, the term that we know and use, was not used during that time. You will see that platinum is a symbol of purity, and that Freemasonry has used a silvery colored serpent/dragon in those representations. Finally, you will see that as a platinum dragon, Bahamut is dragon representing that purity and goodness. References to a dragon specifically, does not appear in literature until after Gary Gygax, that I could find at all. I believe I can show a good case for the origin of dragons as we call them today, and applying the symbol of purity to that dragon.

I have contacted Gygax Magazine for their input, and as of June 20, 2015; I have yet to receive any feedback.

Below is material that indicates how dragons were referenced in the past, and characteristics surrounding their myths. Also, is references to how Gary Gygax [possibly] came about with the concept. 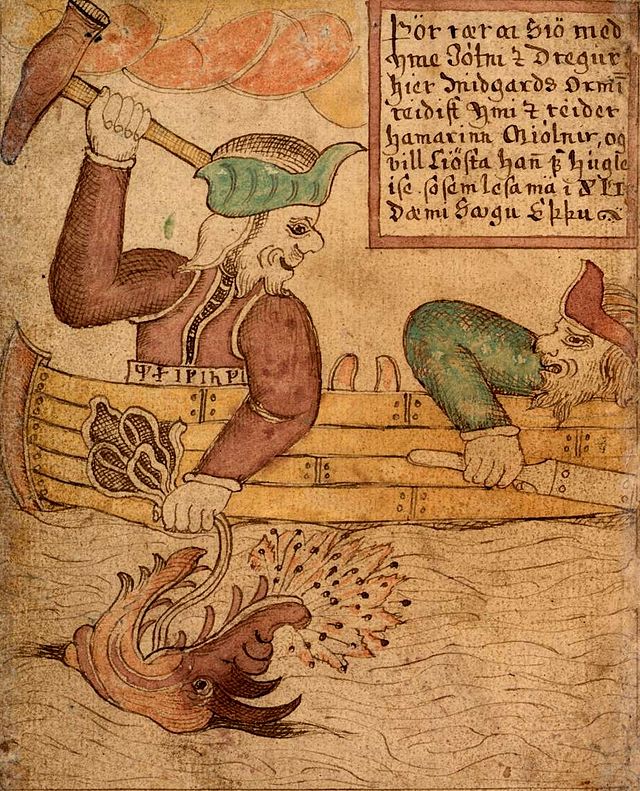 Gary Gygax created Greyhawk, which was loosely based on Eurasia, and contained scandinavian and arabian mythological influence; taking into consideration some inhabitants of Greyhawk:

The Suel were also determined to be the majority racial inhabitants of the lands of the Frost, Snow, and Ice Barbarians (northern lands topographically unique for possessing fjords.

Fjord is a scandinavian word for bay.

What can we gather from Norse Mythology? Jurmungandr.

Jormungandr grew so large that he was able to surround the earth and grasp his own tail. As a result, he received the name of the Midgard Serpent or World Serpent. He was disguised as a cat once by Loki, and was also baited with an ox while in the sea.

Thor encounters the serpent in the form of a colossal cat, disguised by the magic of the giant king Loki, who challenges the god to lift the cat as a test of strength. Thor is unable to lift such a monstrous creature as Jörmungandr, but does manage to raise it far enough that it lets go of the ground with one of its four feet.

Thor then prepares a strong line and a large hook and baits it with the ox head, which Jörmungandr bites. Thor pulls the serpent from the water, and the two face one another, Jörmungandr dribbling poison and blood. Hymir goes pale with fear, and as Thor grabs his hammer to kill the serpent, the giant cuts the line, leaving the serpent to sink beneath the waves.

What can we gather from East Asian mythology? Jinshin-Uwo. (Year: 1855 CE)

The japanese believed that a serpent, or eel, held Japan on its back. It has also been described as a catfish.

Jinshin-Uwo is so huge that the islands of Japan rest on its back. In the south, the city of Kyoto lies atop the eel's massive head. Aomori, 700 miles (1,126 km) to the north, lies atop its tail. In some versions, rather than an eel, Japan rests on the back of Jinshin-Namazu, a giant catfish.

What can we gather from south-east asian mythology? Bahamut. (Year: 1348 CE)

The Book of Imaginary Beings by Jorge Luis Borges.

Arabian Society in the Middle Ages

At this sight Isa fell down aswoon, and when he came to himself, Allah spake to him by inspiration, saying, 'O Isa, hast thou seen the fish and comprehended its length and its breadth?' He replied, 'By Thy honour and glory, O Lord, I saw no fish; but there passed me by a great bull, whose length was three days' journey, and I know not what manner of thing this bull is.' Quoth Allah, 'O Isa, this that thou sawest and which was three days in passing by thee, was but the head of the fish; and know that every day I create forty fishes like unto this.'

As we can put together, the Cat and Fish, and Fish and Ox (Bull), have been cross referenced over three different cultures in three different parts of the world. We have now, a Sea Serpent, that can walk about the land, and even scaring the bejesus out of Jesus. What can we gather from hebrew mythology? Behemoth, Leviathan, and Ziz. (Year: 2nd Century BCE) 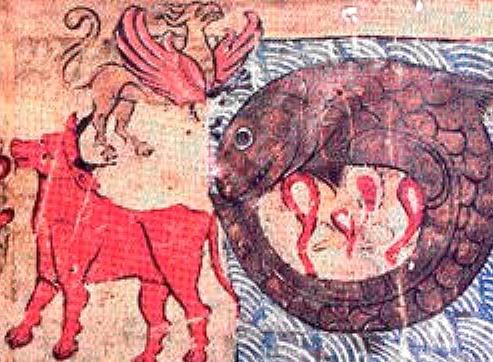 Behold now behemoth, which I made with thee; he eateth grass as an ox.

Canst thou draw out leviathan with an hook? or his tongue with a cord which thou lettest down?. His breath kindleth coals, and a flame goeth out of his mouth.

As Leviathan is the king of fishes, so the Ziz is appointed to rule over the birds. His name comes from the variety of tastes his flesh has; it tastes like this, zeh, and like that, zeh. The Ziz is as monstrous of size as Leviathan himself. His ankles rest on the earth, and his head reaches to the very sky.

Combine the characteristics above, a Sea Serpent, a Land Monster, and a Sky Terror, and you have a dragon: 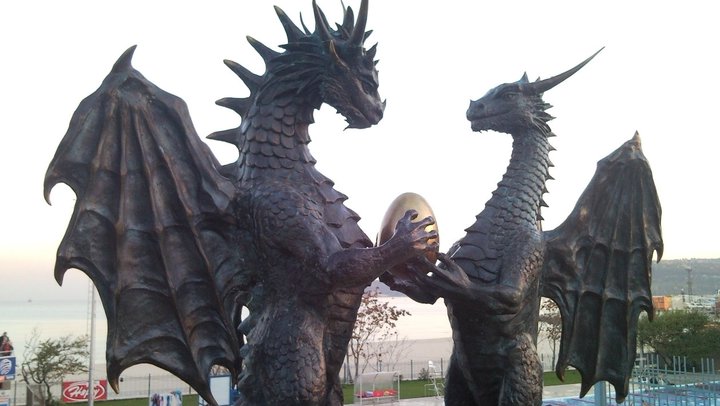 Even the Freemasons utilize the serpent in its imagery, including a world serpent, or sea serpent: (Year: 1884 CE)

The 28th degree of the Scottish Rite, Southern Jurisdiction, the Knight of the Sun (Prince Adept), incorporates the Worm Ouroboros (the dragon, or serpent, holding his own tail in his mouth), into its iconography, representing the immortal and eternal principle as well as both love and wisdom. The 25th degree, The Knight of The Brazen Serpent, also incorporates this symbol.

The Ouroboros or uroboros, from the Greek οὐροβόρος ὄφις (Year: 2nd Century BCE) tail-devouring snake, is an ancient symbol depicting a serpent or dragon eating its own tail. (Year: 360 BCE)

Several Masonic symbols feature a silver [platinum] serpents, such as: 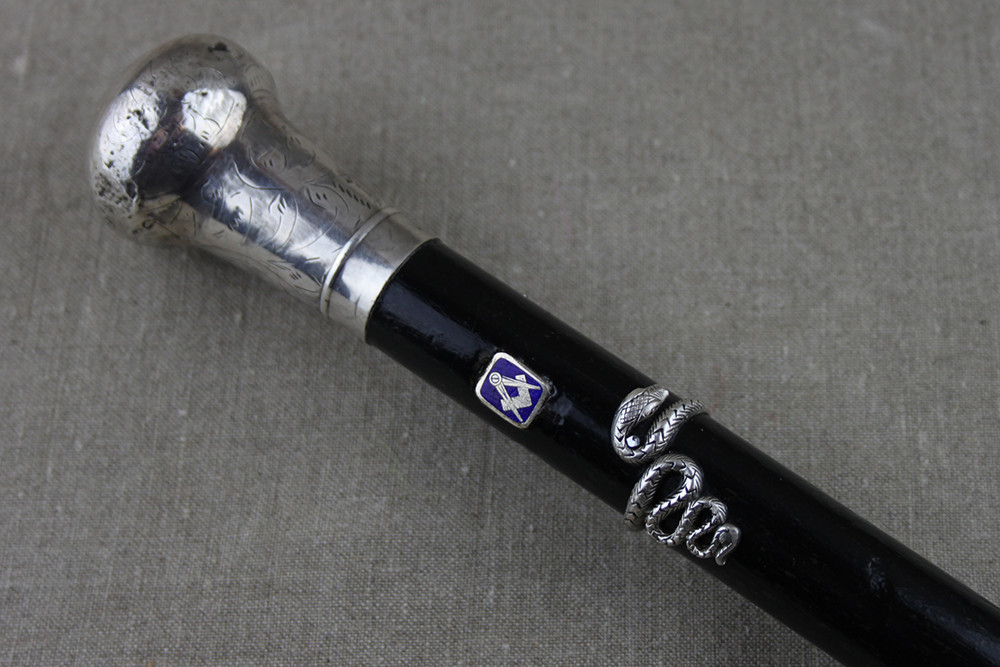 Freemasons believe in purity and utilize the white apron as a symbol of that purity. Platinum is also a symbol of purity.

It is resistant to tarnishing and discoloration due to chlorine and other chemicals. These factors, along with its strength and white luster, have made platinum an increasingly popular choice for jewelry, either on its own or as the setting for diamonds and other precious gemstones. Platinum jewelry does not fade or tarnish and keeps its looks for a lifetime. Platinum’s purity makes it hypoallergenic and ideal for those with sensitive skin.

Bahamut is depicted as a massive, long and sinuous dragon with silver-white scales and blue, catlike eyes. According to Complete Divine and Races of the Dragon, the exact color is hard to specify and may depend on Bahamut's mood, ranging from sky-blue to frosty indigo.

See that... long and sinuous [serpent], silver-white [platinum], catlike eyes [cat], dragon [flying, walking, swimming serpent]. Since platinum is a symbol of love, goodness, and purity, then Bahamut is a literal symbol of all that is good and holy concerning dragons.

Especially when compared to Tiamat; all that is evil and unholy concerning dragons.

Looking at Bahamut's titles, it is also easy to see some norse influence: Lord of the North Wind and Wyrmking in particular.

Although there is no specific account of Bahamut being referenced to as a dragon before Gary Gygax came about, we can certainly learn what his influences were. And Dragons of old were known as Wyrms and/or Serpents.

Therefore, we could safely say that bahamut was very possibly regarded as a dragon; knowing all the different terms used for dragons in antiquity.

Was he a platinum dragon? There appear to be no accounts of Bahamut's color mentioned. Especially the color of platinum. That is very possibly a creation of Gary Gygax indeed.

The similarities between cultures and continents are in-line with other mythos; parallels between religious myths across the world for example. Without being able to ask Gary Gygax himself...

Not the answer you're looking for? Browse other questions tagged dungeons-and-dragons history-of-gaming dragons .