Are there stats for the Roman Scutum in any supplement?

The Roman Scutum was a shield much like a tower shield but smaller and lighter: 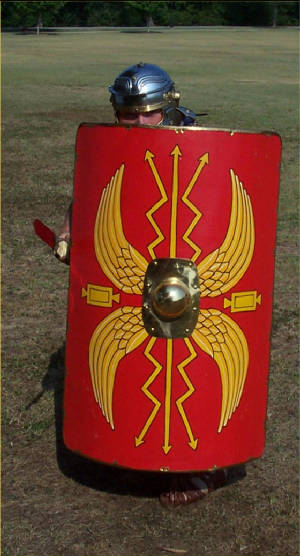 While a D&D Tower Shield is 45 lbs. and can't bash, a Scutum was typically about 22 lbs. (10 kg) and was used for bashing, among other things. The next shield smaller in D&D is the Heavy Shield, but the Heavy Shield is about 30% lighter than a Scutum and can't grant you cover, while a Scutum can be used for cover.

The Scutum seems to be somewhere in between these two standard D&D shields.

Is there a shield anywhere in D&D 3.5 or a d20 supplement that properly models or represents the Scutum, in size and in granting cover and permitting a shield bash?

The answer is no, there are no shields granting cover on its own and allowing to bash with them. Having such a shield would destroy the balance because tower shields would become obsolete in the face of a shield that does both and heavy shields would be at least challenged, depending on your playstyle. I am also not aware of any official publication that lists a scutum shield.

How to handle a scutum inside the rules

Either way is fine, mechanically. You decide.

Not the answer you're looking for? Browse other questions tagged dnd-3.5e d20-system shield or ask your own question.

10
Can a rogue, druid, or cleric use Shield Bash without penalty?
5
Can a Spiked Shield be enchanted with the Bashing special ability?
2
Non-feat-based ways to decrease ACP and bash with tower shields?
3
What feats specifically benefit a character's shield use?
9
Do Tiny-sized Tower Shields provide Total Cover for Huge Creatures?
2
How much cover do non-Medium tower shields provide?
15
Is this homebrew tower shield overpowered?
11
Do tower shields provide cover from all directions?
9
Are these two homebrew shields balanced?